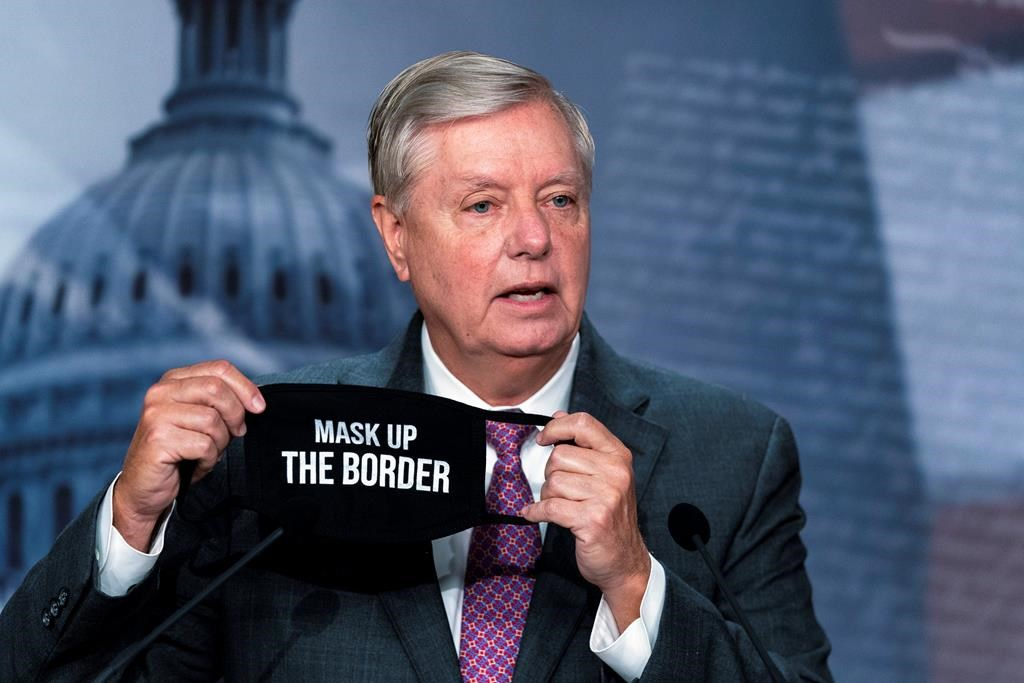 Republican Sen. Lindsey Graham says he is infected with COVID-19, but because he is fully vaccinated, he is mainly suffering from what feels like a mild sinus infection. Photo by Manuel Balce Ceneta / The Associated Press.
Previous story
Next story

OTTAWA — U.S. Republican Sen. Lindsey Graham says he is infected with COVID-19, but because he is fully vaccinated, he is mainly suffering from what feels like a mild sinus infection.

Chagla said his COVID-19 patients in the last month were all unvaccinated.

A report from the U.S. Centers for Disease Control made public last week caused some confusion after it reported that vaccinated individuals with COVID-19 appeared just as likely to spread COVID-19 as those with no vaccine protection.

Chagla said, however, it's still not clear how transmissible the virus found in vaccinated individuals is, and some studies show vaccines help clear the infection faster and therefore the contagious period is much shorter.

The CDC report was partly based on an outbreak of COVID-19 in Massachusetts that led to more than 900 cases after a Fourth of July celebration. About three-quarters of those people were fully vaccinated.

But that report also concluded that vaccinated people are also far less likely to get COVID-19 in the first place and the manager of Provincetown, Mass., where the outbreak happened, said of the total cases, there have been seven hospitalizations and no deaths.

Graham is happy with his decision to get vaccinated even though he is among those with a breakthrough case.

“I am very glad I was vaccinated because without vaccination, I am certain I would not feel as well as I do now,” he said. “My symptoms would be far worse.”

Canada is seeing similar data on breakthrough infections, even as the more contagious and more severe Delta variant takes hold. In Ontario, less than five per cent of all new infections since December were found in fully vaccinated people.

National chief public health officer Dr. Theresa Tam has said Canada is at the beginning of a Delta-variant-driven fourth wave, and that how bad it gets will depend on vaccination levels and provincial public health measures.

The number of new cases daily averaged about 718 on Sunday, up from 364 in mid-July.

Chagla said because of vaccines, the correlation between daily case numbers and the stress on health-care operations is not going to be the same. He noted in the United Kingdom, the Delta-driven wave that started in June pushed cases close to levels close to what they saw in January, but hospitalizations are less than one-fifth of what they were then.

He said he expects Canada to see things behave similarly.

“I don't foresee a scenario where we go back to the way things were in April of 2020, given that 80 per cent of the population, even if they get COVID, is probably not going to end up with more than flu-like symptoms for a couple of days,” he said.

As of Tuesday, more than 81 per cent of Canadians are at least partially vaccinated, and almost 68 per cent are fully vaccinated. They are among the highest vaccination rates in the world, but Canada's vaccination pace has slowed considerably, from more than 500,000 doses given a day in early July, to about 300,000 a day in the last week of the month.

Health Minister Patty Hajdu said Tuesday there is still more work to do to overcome hesitancy, including ensuring people understand how well vaccines are working.

This report by The Canadian Press was first published Aug. 3, 2021.

— With files from Allison Jones in Toronto

Another "expert" opinion without credentials being presented and without real hard data. "The CDC report was partly based on an outbreak of COVID-19 in Massachusetts that led to more than 900 cases after a Fourth of July celebration. About three-quarters of those people were fully vaccinated". So 75% of the "cases" were vaccinated. That never made the first page news. Imagine if 75% of the Stampede attendees unvaccinated were called "cases"... Time for the National Observer (and Canadian Press) reporters to get a handle on data. What is a "case", please give a precise definition, and give the context of age, existing morbidities including obesity, air pollution, etc... We are inundated with confusing data from reporters who have no scientific background and seem to always find an "expert" with a MD degree who will chime the prevailing view. Come on Naitional Observer, you can do better. Show us dissending opinions and present us with a debate with different views.