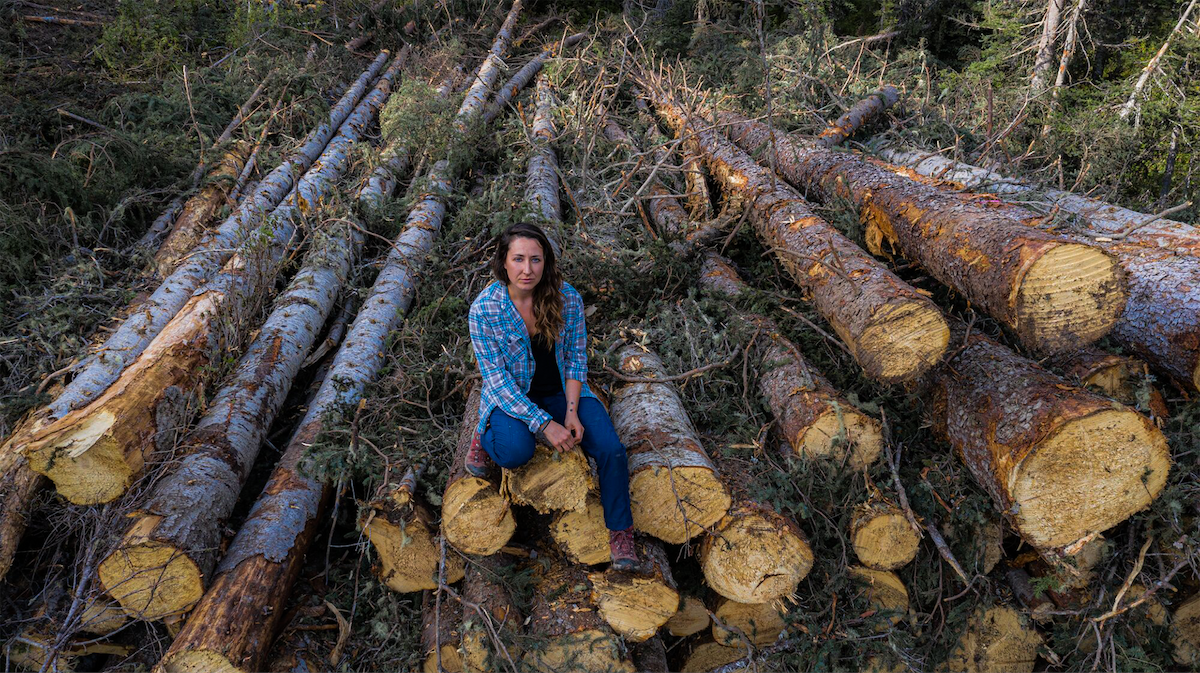 As part of a series highlighting the work of young people in addressing the climate crisis, writer Patricia Lane interviews Charlotte Dawe, a campaigner for the Wilderness Committee.

Charlotte Dawe works to stop wildlife from extinction. I caught up with her just before she went to the B.C. Interior to investigate and film the impact that logging is having on some of the last remaining habitat for woodland caribou.

As the conservation and policy campaigner for the Wilderness Committee, I research and document activities that damage habitat, hold decision-makers accountable to laws, write reports, and talk to authorities. Listening to local people’s knowledge and wisdom is key to identifying at-risk populations, and gaining local support for conservation is crucial. Logging corporations have so much influence with the provincial government. We try to broaden the conversation to include other perspectives.

Can you give us an example?

In 2020, we investigated logging plans in British Columbia’s Argonaut Creek, which would have further endangered a herd of mountain caribou. We saw huge trees already tagged for logging in areas marked as federally designated core critical habitat for this herd, which used to number in the thousands and was now reduced to only 150. Ironically, just two kilometres away across the valley, B.C. was restoring habitat for the same herd. We were able to get both governments talking, and with the support of the local people, the logging was suspended.

In other cases, we have forced the provincial government to adopt locally informed recommendations for improving the wildlife viability rather than appealing to the federal government to use its supervisory power through the Species at Risk Act.

When she was a kid and a nearby wetland was drained, Charlotte Dawe grieved for the crickets and frogs. "I knew whose side I was on even then." #habitat #wilderness #preservation

What drew you to this work?

When I was five years old, we lived near a wetland in Sherwood Park, Alta. I used to fall asleep to the soothing sounds of frogs and crickets. Then one day, only silence. The swamp had been drained to make room for development. I really grieved for the dead crickets and frogs. To make matters worse, they were replaced by the sounds, sights and smells of refineries. I knew whose side I was on even then.

As a teen, I suffered real eco-grief. When I told my counsellor that I was worried about depleting ocean fish stocks, she advised me to make the most of it and eat what was there now before it was all gone. This did not feel like moral advice.

I was studying nursing as a career, but found myself often distracted researching ecological issues. One night before an exam instead of studying or sleeping, at 2 a.m. I was online reading about an impending natural catastrophe. I suddenly realized I was never going to be a nurse, and switched into natural sciences. Now at 28, I know I’ve come home.

Our society is so divided by power structures that make so much money, they ensure that separation continues. If we logged sustainably, there would be jobs for loggers forever. If we stopped overfishing, we would enhance our species’ chance of survival by protecting oceanic ecosystems. We need to keep talking to people who we see as opposed to us. Once we do that, we will realize that one of the main reasons we do anything is because we all love our families and want to feed and care for them. But the stories that get cultural prominence say we are on different sides. If that divide stops us from communicating, then we’ve lost. It's terrifying.

Seeing and hearing Indigenous youth I follow on social media. They continue to endure unfathomable hardships, and yet, they are so powerful. And I love seeing the movement become more intersectional. We’re starting to fill in the gaps. Mistreatment of land is directly related to mistreatment of Indigenous peoples and other marginalized communities. We cannot have conservation without justice. We are deepening our understanding that everything is connected, and we and the non-human natural world are all one.

Talk about what is on your mind. You are not alone. Most of us are there, too. My extended family mostly works in oil and gas. When I go back to visit, at first it might be a bit awkward to dive into those conversations, but we must have them. Mostly once they know I don’t think it is their personal fault, they agree with me, and we can talk about the system and have amazing conversations.

Is there anything you would like to say to older readers?

I get frustrated when I hear older people or the dominant media saying the youth will solve the problems. I would love for there to be more pressure on my parents’ generation to show up.

Many young people are facing multiple stresses, like low-income jobs, lack of jobs, unaffordable housing. Combined with ecological grief of dooming planetary collapse, it can be utterly overwhelming. We really need you. Show up at events, donate to front-line youth, challenge the system, and start having those awkward conversations with your friends. Join us.