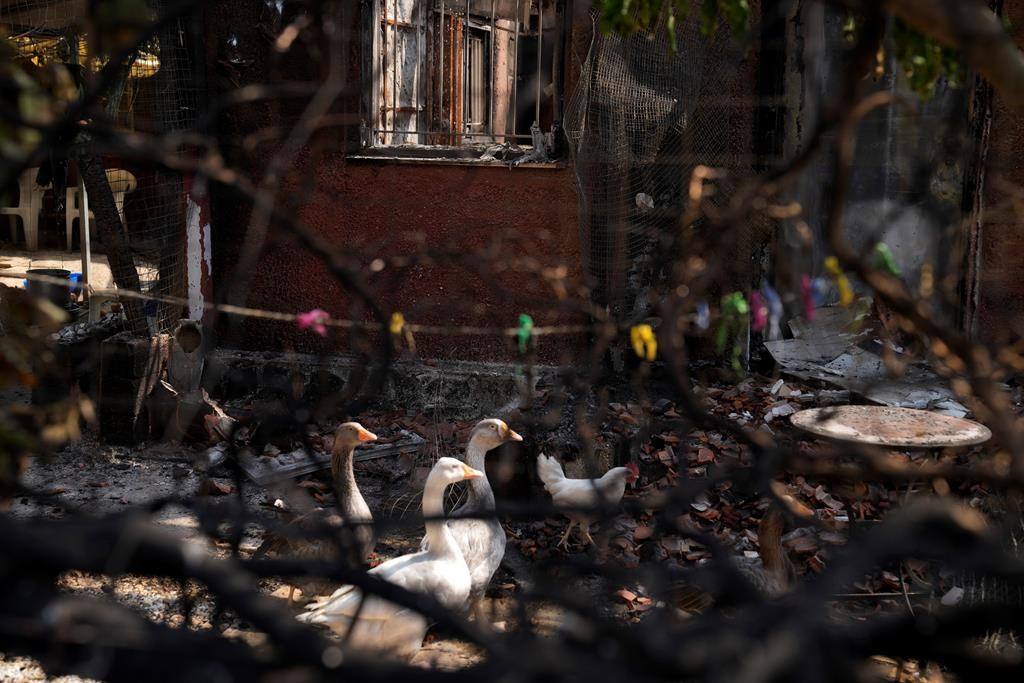 Geese walk at a burned house after a wildfire in Varibobi area, northern Athens, Greece, on Wednesday, Aug. 4, 2021. Photo by The Associated Press/Thanassis Stavrakis
Previous story
Next story

Firefighters in Greece raced Wednesday to fully contain a wildfire on the outskirts of Athens that destroyed or seriously damaged dozens of homes overnight, forced thousands to flee, and threatened a former royal palace, as high temperatures fueled wildfires across the country.

Greece is enduring its worst heat wave in decades, with temperatures in parts of the country expected to reach 45 degrees Celsius (113 F). The Fire Service took advantage of cooler morning hours to send low-flying helicopters and planes to dump water on charred forest land around Tatoi, 20 kilometers (12.5 miles) north of the capital, where more than 500 firefighters had battled through the night to contain the blaze.

“The ground crews did vital work, (fighting) nightmarish fires in suburban forests,” Prime Minister Kyriakos Mitsotakis said, visiting a mobile control center in the area. “We had no loss of human life...Homes will be rebuilt, and over time the forest will grow back.”

Firefighters pumped water from a swimming pool to douse the flames, and water-dropping buckets were attached to helicopters provided by the military.

Extreme weather also has fueled deadly wildfires in Turkey and blazes in Italy, Albania and across the Mediterranean region.

The fire outside Athens sent clouds of smoke over the Greek capital, obscuring visibility and prompting health authorities to issue warnings to people with breathing difficulties to remain indoors. The grounds of a summer palace previously owned by Greece’s former royal family were damaged, but none of the buildings.

Sporadic power outages were reported in areas of the city near the fire, after the flames toppled electricity transmission towers, adding strain to the overloaded national grid.

Evacuations continued Wednesday on the island of Evia, while a fire threatened homes, and wildfires were also ongoing in the southern Peloponnese region.

Authorities said 81 wildfires had been reported around the country in 24 hours from late Monday to late Tuesday.

“It was another exceptionally difficult night,” Civil Protection chief Nikos Hardalias said said while visiting a fire department mobile coordination center in the area of the fire in the Varibobi and Tatoi suburbs of the Greek capital. He said fire fighters had succeeded in reducing four active fire fronts to one overnight.

“There is still a lot of work to be done,” he said.

The leafy suburbs of Varibobi and Tatoi lie at the foot of Mount Parnitha, next to large forests of mainly pine trees. The fire, which began on Tuesday afternoon inside the forest, quickly raced through the flammable pine and reached the main square of Varibobi.

Some nearby residents took to social media to offer shelter for animals affected by the fire.

The heat wave is forecast to continue in Greece until the end of the week. Emergency measures remain in place all week, including changes to working hours and services, and heightened fire monitoring.

The government provided hotel rooms for local residents for as long as they are unable to return to their homes.

Gatopoulos reported from Athens and Becatoros from Argostoli, Greece.