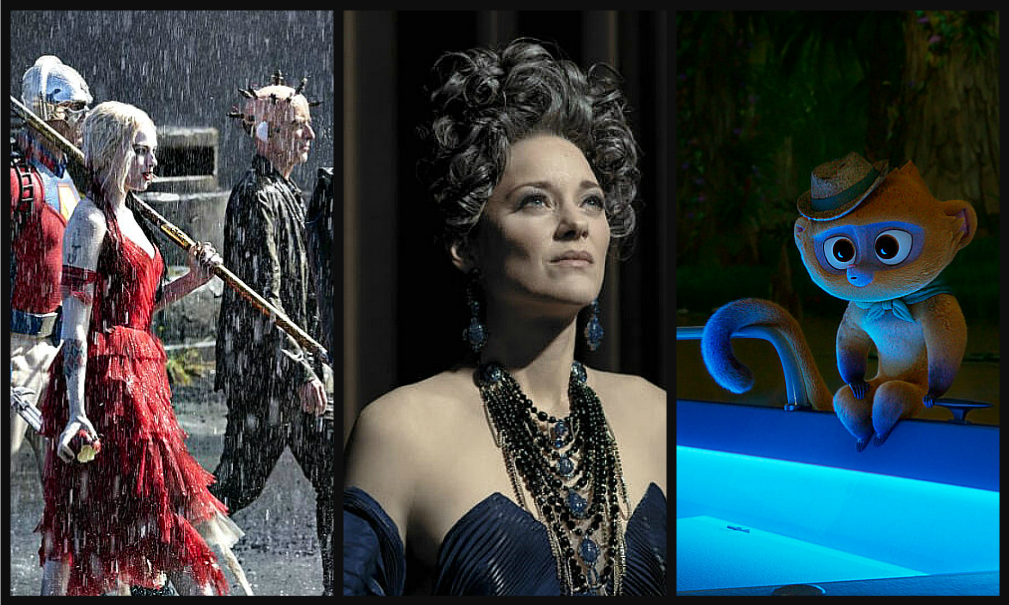 There's a batch of new movies and a lot of news this week.

Disney is opening an animation studio in Vancouver. It had a Pixar studio here for a few years, but shut it down. I'm just speculating now, but the coming back might be to compete with the busy Sony animation studio, whose latest work is included in my reviews today.

In other news, the Vancouver International Film Festival has announced its dates for the year: Oct. 1-11. Like last year, that's a little shorter than usual.

And the Cinematheque isn't tinkering with its successful summer formula: Its Film Noir series is on again. It started Thursday with Criss Cross and Raw Deal, both of which will be showing again, including today. I'm looking forward to The Glass Key and Sorry Wrong Number, but check out the site for what all will be there. The series runs almost all month.

And elsewhere, these are new in town ...

SUICIDE SQUAD: Here's how to tell if this is for you. Well-made with lots of action? Check. Wacky situations and irreverent humour? Check. A ridiculous storyline? Uh, oh. Also check. But if you can tolerate it, you can have lots of fun. It may have made more sense back in the DC Comics books it came from, but here it shows exactly what James Gunn, the writer-director, meant when he said he was free to make it with “no rules.” He had enormous resources, though, and a strong cast that includes Margot Robbie, Idris Elba, John Cena, Viola Davis, Peter Capaldi, Alice Braga, Pete Davidson, Michael Rooker, Taika Waititi, and more.

Davis commands the super-secret squad (official name Task Force X) from a high-tech monitor centre. She sends it to a fictional South American island nation where a coup ousted the longtime rulers and a people's movement is organizing against the generals now in charge. She has to protect a secret science development that escaping Nazis started decades ago and the U.S. has a stake in. That political background is one of the interesting parts of the film. The project is not. It's a giant starfish that can send tiny versions of itself to latch on to your face and stomps around crashing buildings like another Godzilla. There are also rats, millions of them, a shark (voiced by Sylvester Stallone) and a squad of characters who don't respect or even understand each other and sometimes fight. And there's Harley Quinn (Margot Robbie, playing her a third time), who again brings life, impulsiveness and insolence to the role. She's a treat in this violent, gory and foul-mouthed, but sometimes exciting, film. (5th Avenue, Scotiabank, Marine Gateway and many suburban theatres.) 2½ out of 5

ANNETTE: This is one of the strangest movies you'll ever see, and you're likely to hear some day that it has found a cult following. So get in now, but be careful. There's nothing sweet and pleasant here. The two stars, Marion Cotillard and Adam Driver, demonstrate their characters' love for each other in almost constant song and with occasional oral sex. It's a musical created by the brothers Ron and Russell Mael, who make up the longtime band The Sparks. And it's envisioned by the French wildman director Leos Carax, best known for the loony Holy Motors, which was here a couple of film festivals ago. This one opened the Cannes festival this year.

Cotillard plays a sweet-voiced opera singer; Driver a virulent stand-up comedian. Their relationship is becoming troubled. Annette, the child they beget, is a wooden puppet. See? Strange. Annette later shows she, too, has a sweet singing voice and while her mother is becoming a bigger star, Driver is slipping. He performs in a bathrobe, telling grim monologues and draws chants from his audience: “Why did you become a comedian?” The film does seem to be a meditation on fame, celebrity and the connection of an artist and an audience. He refers to his method as “killing them.” She calls what she does “saving them.” Somewhere there is the meaning of this film, which is watchable because it's so bizarre. (Vancity Theatre.) 3 out of 5

VIVO: Ready for more Lin-Manuel Miranda? He's everywhere this year, this time on Netflix in a heartfelt musical tale about honouring a lost love. It's animated, so he's there in voice only and in 11 new songs, one written with Missy Elliott. Several are sung by Gloria Estefan, who also voices the missing love. She's a Cuban singer who left for Miami years ago, is retiring and has invited her former partner to a farewell concert. He dies, though, and it's up to his pet kinkajou (a rainforest teddy-bear-like creature, named Vivo and voiced by Miranda) to make the trip for him.

He's got an urgent mission: Take her the sheet music for a song the man had written and never got to sing to her. Vivo hitches a ride with a young tourist (Ynairaly Simo) travelling with her mother (Zoe Saldana), has to elude a trio of Girl Scouts hectoring an environmental message, and takes a detour through the Florida Everglades. She almost loses the song, misses connections, has to be saved from a snake by a bird. The animation is excellent (some of it done by Sony Pictures Imageworks in Vancouver), the songs are hummable and the feeling is warm. (Netflix.) 3 out of 5

ESCAPE FROM MOGADISHU: South Korea has been sending very good movies for some time now, and this is another. Not well-known maybe, but exciting to watch. It's as good as Argo, and almost as good as Black Hawk Down, both of which share story elements. It's also a true story. Rebels have overrun the capital of Somalia in 1990 and are threatening foreign embassies. The South Korean ambassador tries to join with his North Korean counterpart to get their staff out. He's rebuffed because, allegedly, he's been spreading rumours that the North has been arming the rebels. Both countries want Somalian support for a United Nations vote.

Their politics and those tensions are deftly set out, but the real excitement is out in the streets. There are demonstrations, army pushback, riots and looting staged with thrilling authenticity. Not just once, but several times. The two Koreas have no choice but to try to work together to get help from the Italians and the Chinese and then make a dash towards the airport. They have to lie about “conversion certificates” (North Koreans defecting) and paste books on their cars to stop bullets. There's a frantic chase amid guns firing from every direction and, ultimately, a lament that the two countries are not united. It's at International Village and Cineplex Coquitlam and well-worth finding. 4 out of 5

SWAN SONG: I'm not the target audience for gay films, but this one builds a story that's so much wider and with so many universal elements that I was quite engrossed. It's about memory, honouring people you used to know and fixing up your connections with them. It's also about forgiveness, as an aging drag queen becomes obliged to give and accept it. Those issues can face anybody and get a very moving presentation here. Udo Kier, familiar from many European films, plays the former “Liberace of Sandusky” (that's in Ohio).

He's also a former hairdresser, now living in a care home, and sets out across town and through his memories when he gets a strange request to do one more job. A former client has died and in her will requested he be hired to do her hair, because to her, he was the best. “Rita” (played in flashbacks by former Dynasty star Linda Evans) “wants to make things right,” says her lawyer, referring to a falling out she caused years before. There's a complicating list of things: a rival hair salon, betrayal, a lover of his who died of AIDS and still brings him to tears when he visits his gravesite. It could get maudlin, but doesn't in the writing and direction of Todd Stephens, who is telling a real man's story. He knew him and based the film on memories. It plays that way: Emotional and in Kier's performance, authentic. (Vancity Theatre.) 4 out of 5

12 MIGHTY ORPHANS: Two sports stories arrive this week, both small, unlikely but true, and rousing. This one tells of a high school football team in Texas that nobody expected much from. It was 1938, near the end of the Depression. The students were all orphans and none of them ever played football before. Enter a new English teacher (Luke Wilson), who saw the boys needed to learn to believe in themselves and promoted the sport to do it. The school doctor (Martin Sheen) was on-side, the administrator (Wayne Knight) not so much. And both the league and the boys needed convincing.

What follows is a moving tale of motivating the players and counteracting their old resentments. One boy sees every opponent as a version of his mother. There's hard work in learning the game, innovative plays to make up for weakness on the team, rousing speeches, and then, unexpected success. Snarky reporters are astounded. We're buoyed. Win or lose, it's an inspiring example of building self-respect and one of the better sports movies in quite a while. (International Village.) 3½ out of 5

DREAM HORSE: The other sports story isn't innovative at all. But it's warm, pleasing and entertaining. It doesn't labour to inspire; just tells what happened and what it means to the people it happened to. Toni Collette plays a grocery clerk in a small town in Wales, with a boring life. Neither her husband nor her work excite her, and she needs “emotional motivation and energy.” A man she overhears in a pub starts it for her. Get into horse racing. But how? She has no experience and little money. She forms a syndicate. Local people chip in 10 pounds a week; she buys a mare, pays for a stud service and watches a foal emerge and grow into a frisky racer that the group names Dream Alliance.

A trainer is dismissive, but concedes “she's got spirit.” A rich and successful horse owner sniffs at the group. They've arrived at the track by rented bus, which not only suggests the inequality they're living under, but the camaraderie they develop. They sing heartily in the pub and feel the tension and the release watching the horse run. She generally starts slow and then picks up the pace. We're right there with her thanks to some excellent cinematography. It's not unexpected that she gets to race in the Welsh Grand National. The film doesn't change the formula; just gives us a good version of it. (5th Avenue, International Village, and eight other theatres around B.C.) 3½ out of 5