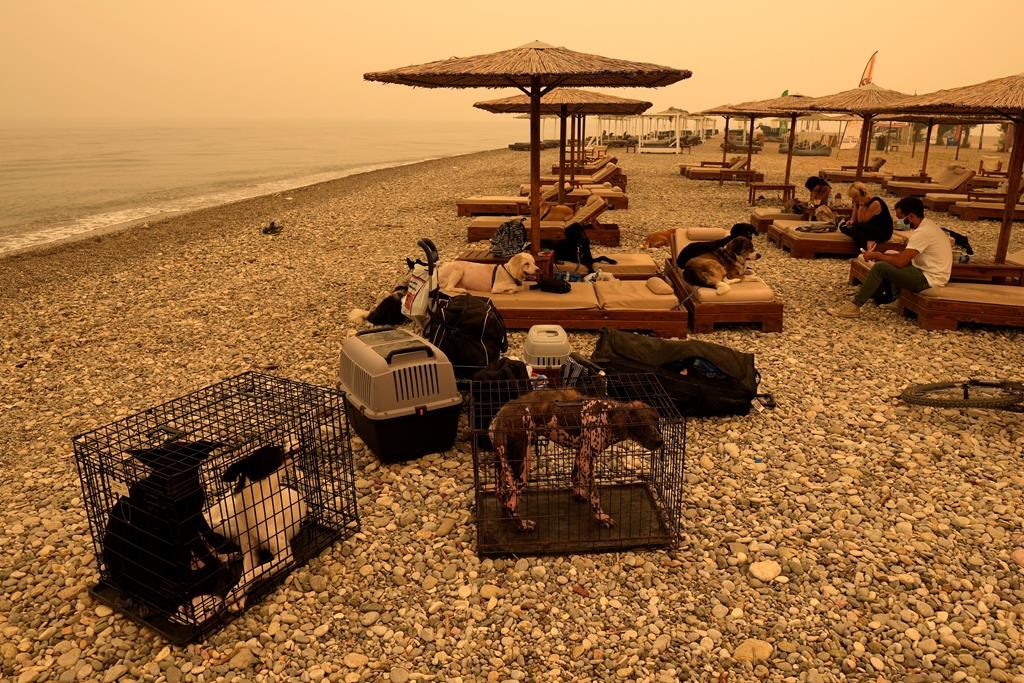 People and pets gather on the beach during a wildfire at Pefki village on Evia island, about 189 kilometers (118 miles) north of Athens, Greece, on Monday, Aug. 9, 2021. Photo by The Associated Press/Petros Karadjias
Previous story
Next story

Firefighters and residents battled a massive forest fire on Greece’s second largest island for a seventh day Monday, fighting to save what they can from flames that have decimated vast tracts of pristine forest, destroyed homes and businesses and sent thousands fleeing.

The smoke and ash from the fire on Evia, a rugged island of forests and coves almost touching the Greek mainland, blocked out the sun, turning the sky orange as the blaze rampaged across the northern part of the island.

Evia’s fire, which began Aug. 3, is the most severe of dozens that have broken out across Greece in the past week, after the country was baked by its worst heat wave in three decades which sent temperatures soaring to 45 degrees Celsius (113 Fahrenheit) for days. The heat, coming amid what has already been a particularly hot summer, has turned Greece’s forests, including large areas of easily flammable pine trees, into bone-dry tinderboxes.

Other big fires have been burning forests and farmland in the southern Greek region of the Peloponnese, while a major blaze that burned into the northern suburbs of Athens and Mount Parnitha national park on the fringes of the capital was on the wane. Firefighting efforts continued in Parnitha, where French, Israeli and Cypriot firefighters were helping their Greek colleagues.

The wildfires have stretched Greece’s firefighting capabilities to the limit, and the government has appealed for help from abroad. More than 20 countries in Europe and the Middle East have responded, sending planes, helicopters, vehicles and manpower.

Greece's foreign minister, Nikos Dendias, tweeted Monday he had spoken to his Russian counterpart and asked whether Russia could send a second Beriev Be-200 firefighting plane to Greece. So far Greece has leased one such aircraft, the largest operating in the Greek fires.

I had an extensive telephone conversation with #Russia counterpart S.#Lavrov earlier today. Battling against wildfires was discussed and the examination of the possibility of dispatching an additional Beriev BE-200 airplane to provide assistance was requested. (1/2) pic.twitter.com/c2QhfpAWVA

Despite the help, many residents and local officials have complained of a lack of firefighters, and some have taken to calling in to Greek television networks to appeal for help, particularly from water-dropping planes and helicopters.

“We were completely forsaken. There were no fire brigades, there were no vehicles, nothing!” David Angelou, who had been on Evia in the seaside village of Pefki, said Sunday night after leaving the island by ferry to the mainland harbor of Arkitsa.

"You could feel the enormous heat, there was also a lot of smoke. You could see the sun, a red ball, and then, nothing else around,” he said.

Greek authorities, scarred by a deadly wildfire in 2018 near Athens that killed more than 100 people, have put the emphasis on saving lives, sending dozens of evacuation orders for inhabited areas in the path of the flames and organizing flotillas of coast guard and navy vessels, ferries and other boats to evacuate people from coastal areas when necessary. Some of those who died in the 2018 fire in Mati drowned trying to escape by sea after they became trapped on the beach.

But some, including local officials in affected areas, have argued the evacuation orders have come too soon, saying residents could provide valuable help to stretched firefighting resources in saving villages.

On Monday, the flames continued across northern Evia, threatening yet more villages. Satellite imagery from the European Union's Earth Observation Program showed vast tracts of the island charred, with the fire having cut across it from coast to coast.

Greece’s Civil Protection chief, Nikos Hardalias, has stressed that firefighters have been doing everything they can. Firefighters from the Ukraine, Romania and Serbia had been sent as reinforcements to Evia, where more than 600 firefighters were operating, along with five helicopters and five water-dropping planes, the fire department said Monday.

On Sunday, a small firefighting plane crashed on the western Greek island of Zakinthos while fighting a smaller fire there.

All were injured on Aug. 5. Two suffered burns to their arms and their condition was not life-threatening, while the other two suffered extensive burns and were hospitalized in critical condition in the intensive care unit of Athens' main trauma hospital, the hospital said Monday.

Health authorities said Monday that an Israeli firefighter suffered an eyelid injury and received first aid before returning to the area north of Athens where the 16-member Israeli contingent of firefighters sent as reinforcements were operating.

In southern Greece, a 38-year-old civilian who had been helping fight a wildfire was hospitalized with an eye injury, officials said.

Massive fires have also raged for more than 10 days in neighboring Turkey, where firefighters were still trying to extinguish blazes in five locations in the coastal province of Mugla, in the country’s southwest.

“The situation is improving,” Agriculture and Forestry Minister Bekir Pakdemirli said late on Sunday. “It is too soon to say the fires are under control, but we are reaching that point.”

Wildfires were also burning in southern Italy and in Montenegro in the Balkans, where a large fire in the Malo Brdo district of the capital Podgorica came close to houses.

On Evia overnight, residents and firefighters managed to save most of the village of Pefki, on the island’s northern tip, where fast-moving flames entered the outskirts Saturday evening and destroyed at least one home.

A ferry that had been sent to Pefki to potentially evacuate people by sea turned into a temporary shelter for those residents of that and other nearby villages who didn’t have the means to flee toward north Evia’s main harbor of Aidipsos, or who wanted to remain near their homes so they could return and check on them whenever it was safe to do so.

Monday morning found dozens of local residents, many with their pets, sleeping on chairs on the ferry, or on the lounge chairs of Pefki’s pebble beach. Most of the surrounding villages had been left without power and running water due to the fire.