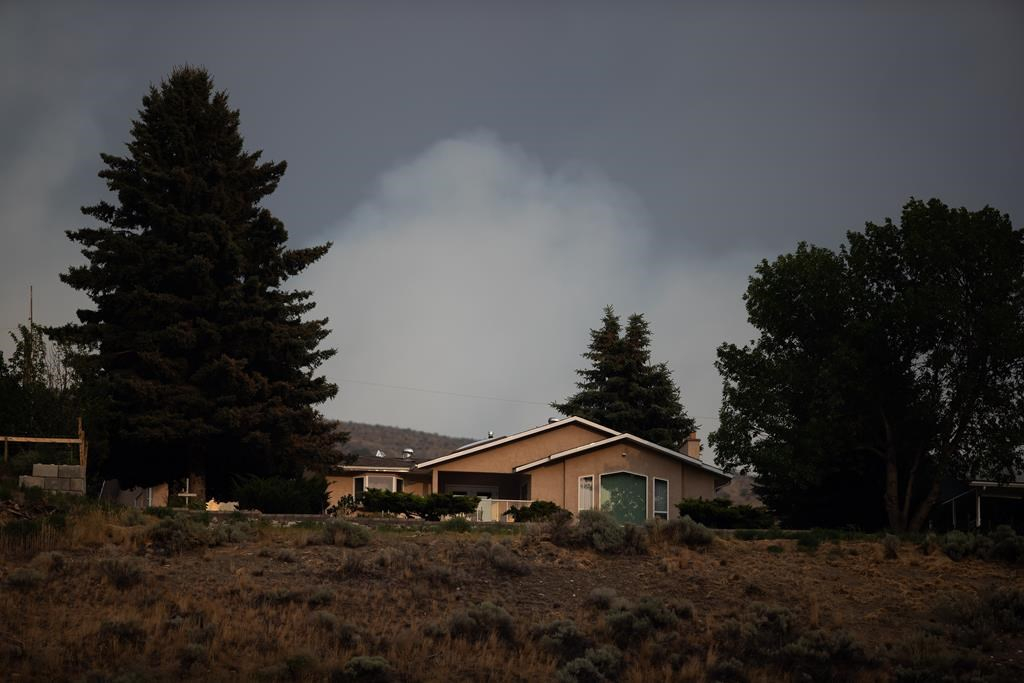 Smoke from the Tremont Creek wildfire burning on a mountain rises in the distance behind a home in Ashcroft, B.C., on Thursday, July 15, 2021. File photo by The Canadian Press/Darryl Dyck
Previous story

A man who lost his family home in Monte Lake, B.C., said his sister escaped while the tires on her vehicle were melting.

Kevin Cooke said his sister Jackie Cooke left when told to by fire crews, but wasn't able save her cats, birds or their mother's ashes from the onrushing wildfire.

She did manage to collect the dogs, he said.

"When she was leaving, the tires on her van were melting," he said in an interview from Sylvan Lake, Alta. "All she wanted to do was grab one box of my mom's ashes, but she couldn't even do that."

Jackie Cooke is one of many forced from their home Friday by the wind-fanned wildfire in B.C.'s central Interior.

He said the family had hoped the property would be safe as fire crews were pumping water to fight the wildfire right next to the home.

Kevin Cooke finally managed to reach his sister on the weekend, and she told him she was surprised by the speed of the blaze.

"All hell broke loose, it came down the valley so freaking fast," he said. "It jumped the tracks and came up both sides."

There was no warning from the regional district or the government about the threat the fire posed, he said.

The property wasn't insured, Cooke said, as an insurance inspector had rescheduled an inspection due to COVID-19.

Cooke said he's launched an online fundraiser to help his sister get back on her feet and provide for the animals she cared for.

The devastation comes as cooler temperatures and better fire conditions have given crews a reprieve in their efforts against the White Rock Lake wildfire, the same one that swept through Monte Lake.

Taylor MacDonald, a fire information officer with the BC Wildfire Service, said the fire — which has scorched nearly 560 square kilometres — has not shown much growth Monday.

"It's been a bit of a reprieve for our crews on the ground," she said. "We're just continuing to monitor the weather."

More than 160 firefighters, along with 138 structural protection officers, 16 helicopters and 53 pieces of heavy equipment, are fighting the fire.

Weather forecasts show hot, dry weather returning to the region, which MacDonald says the fire service is keeping a close eye on.

The Ministry of Forests says about 270 wildfires are currently burning, most in the southern Interior, with eight sparked over the last two days.

The wildfire service said it has started clearing a contingency guard south of the fire, using heavy equipment to scrape away brush and debris, in case the wildfire pushes forward.

MacDonald also had advice for residents who may have opted to stay behind to work to save their properties from the encroaching fire.

"We've got well-trained and well-equipped firefighting professionals on the ground here who are able to action the fire safely," she said. "It makes it not safe to do their job when they're having to worry about residents who haven't evacuated or are remaining behind to fight the fire."

Public Safety Minister Mike Farnworth said in a statement that he understands the stress from residents who are forced to leave their homes, but emphasized that evacuation orders and alerts are not made lightly.

"People need to follow those orders and leave immediately when an evacuation order is issued," he said.

A damp weekend allowed the City of Vernon to lift its evacuation alert prompted by the same fire, although orders or alerts from three regional districts, two communities and two First Nations are still in place.

The province says nearly 6,600 properties remain on evacuation order across B.C., while residents of more than 32,000 properties have been told to be ready to leave on short notice.