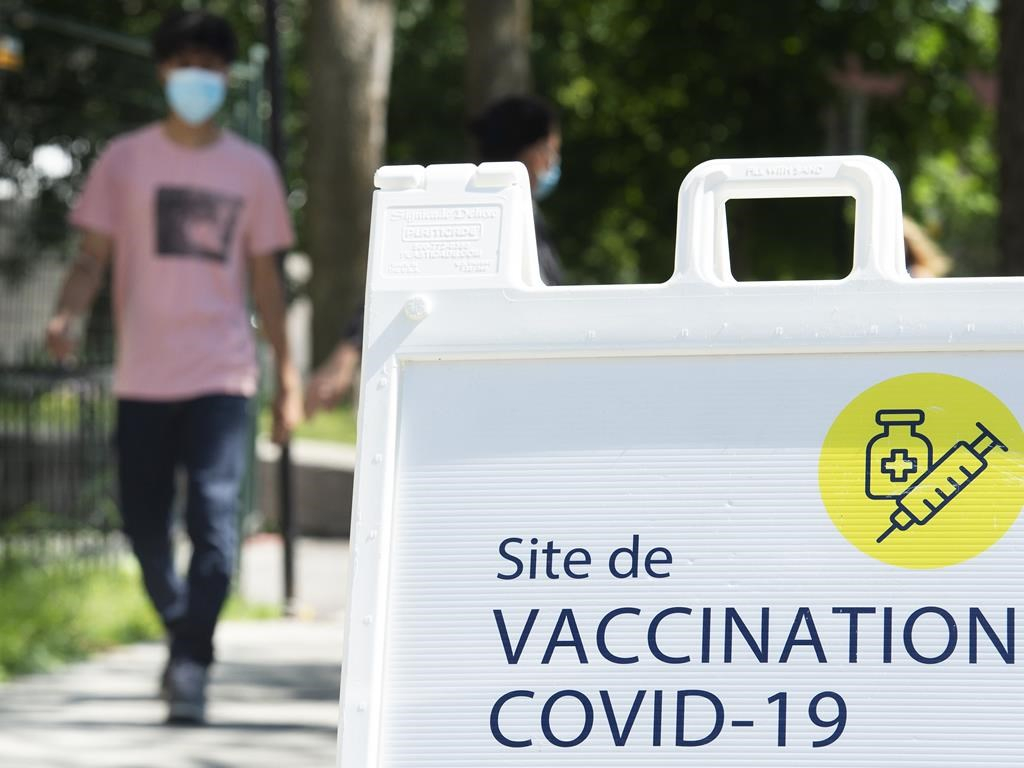 People wear face masks as they walk by a vaccination sign in Montreal, Saturday, July 24, 2021, as the COVID-19 pandemic continues in Canada and around the world. Photo by: The Canadian Press/Graham Hughes
Previous story

OTTAWA — Canada has gone from being desperate for every dose of vaccine it could get to stockpiling millions of them in freezers across the country.

Data on vaccine deliveries, distribution and injections provided by Health Canada and the provinces show almost 22 million doses have been delivered to Canada but not yet used.

That includes a national "reserve" of nearly 10 million doses, and more than 11.7 million doses delivered to provincial and territorial governments that have yet to be administered.

Until early July, Ottawa distributed every dose to the provinces immediately. As vaccine demand slowed and provinces didn't need as many doses delivered, the federal government started amassing an emergency reserve. That stockpile now stands at 9.8 million doses, more than 13 per cent of the 72 million doses delivered to Canada to date.

Procurement Minister Anita Anand says how many of the stockpiled doses can be considered excess and available for donation to other countries is still up in the air.

"There are a number of unknowns at the current time as the science continues to take shape and evolve," Anand said in a recent interview with The Canadian Press.

"In particular, we are unsure as to whether boosters will be required and, if they are required this year, what form they will take. We also expect to have additional applications from Pfizer for the five to 11-year age group and we need to make sure that we have supply in place for that age group also."

Canada has already purchased 35 million booster doses from Pifzer to be delivered in 2022, and another 30 million for 2023.

Canada has not yet recommended using booster shots but some countries, including Germany, are giving them to people with compromised immune systems. Chief public health officer Dr. Theresa Tam said last week the need for boosters is still being studied.

World Health Organization director general Dr. Tedros Adhanom Ghebreyesus said in July wealthy countries that were stockpiling vaccines were being greedy. Last week he asked countries not to order or administer booster shots until at least the fall, so people still waiting for their first dose in other countries might not have to wait as long.

Once desperate for #COVID #vaccines, Canada is now sitting on a 20-million dose stockpile. #cdnpoli

More than 4.5 billion doses of vaccine have been given out worldwide, but only one per cent of people living in low-income countries have even had one dose.

Canada has donated $575 million to buy doses for less wealthy countries, relinquished 13 million doses it purchased directly from the COVAX vaccine sharing alliance, and promised to donate the 17.7 million doses left in its contract with AstraZeneca.

To date, only 82,000 of those have been shipped, in an agreement last week with Trinidad and Tobago. More agreements are expected soon.

Canada would need 66 million doses to vaccinated everyone over 12 with two doses, but it's expected more than 10 per cent of Canadians will not get the shots. How much vaccine is needed for younger children is still undetermined because the doses for them are as much as one-tenth the size of doses aimed at adults.

Anand said the Pfizer contract was updated in the spring to make it flexible for securing doses for kids but until the authorization comes for those age groups it's not clear how much vaccine will be needed for them.