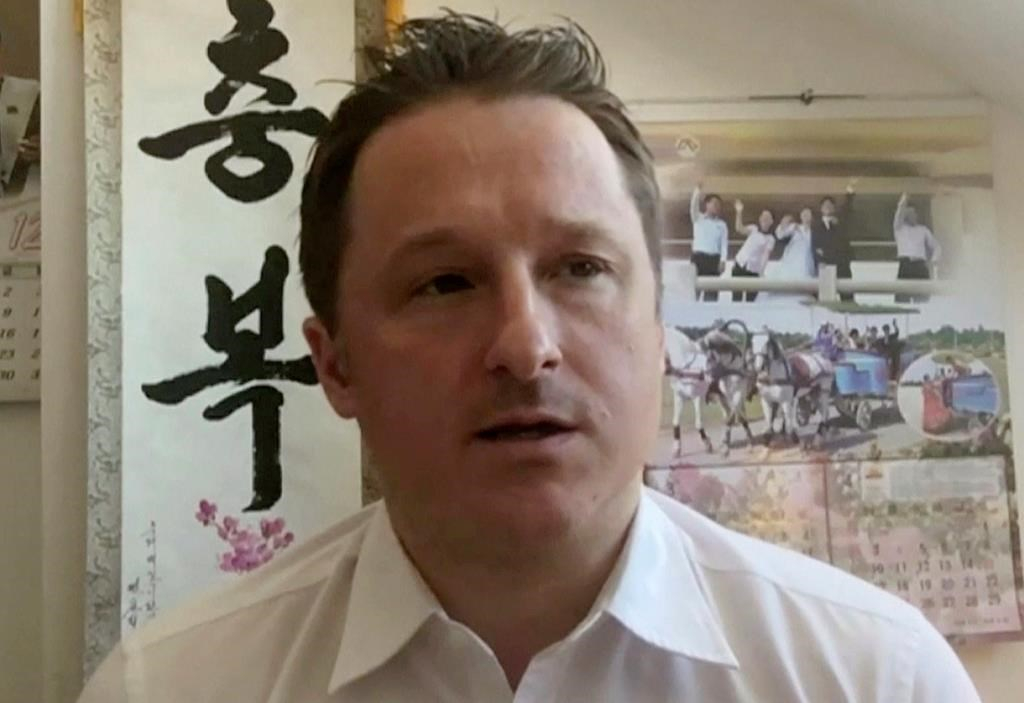 In this file image made from a March 2, 2017, video, Michael Spavor, director of Paektu Cultural Exchange, talks during a Skype interview in Yanji, China. Photo by: The Canadian Press/AP
Previous story
Next story

OTTAWA — Federal leaders were united Wednesday in calling for the release of two Canadians detained by China after one was sentenced to 11 years in prison in a case that has put them — and Canada — at the centre of a bitter battle between China and the United States.

Despite the rare show of political unity and government promises to keep fighting for their release, it remained unclear exactly which cards Canada still has to play when it comes to freeing the prisoners who have become known as the two Michaels: Michael Kovrig and Michael Spavor.

A Chinese court sentenced Spavor to 11 years in prison on Wednesday in a spying case that Canada says is linked to Beijing’s effort to secure the release of an executive of tech giant Huawei, sparking condemnation from Prime Minister Justin Trudeau and others.

"Today's verdict for Mr. Spavor comes after more than two and a half years of arbitrary detention, a lack of transparency in the legal process, and a trial that did not satisfy even the minimum standards required by international law," Trudeau said in a statement.

"For Mr. Spavor, as well as for Michael Kovrig who has also been arbitrarily detained, our top priority remains securing their immediate release. We will continue working around the clock to bring them home as soon as possible."

Spavor, an entrepreneur, and Kovrig, a former diplomat, have been detained by China since December 2018. That came days after Huawei chief financial officer Meng Wanzhou was arrested in Vancouver.

A British Columbia court is preparing to hear final arguments on whether Meng should be extradited to the U.S., where she is wanted on allegations of having violated trade laws. China’s government has criticized the arrest as part of U.S. efforts to hamper its technology development.

Foreign Affairs Minister Marc Garneau said the Canadian government condemns "in the strongest possible terms" Spavor's prison sentence, which followed a closed-door trial in March in which he was found guilty of spying on China.

"We know that the practice of arbitrary detention with a mock, sham trial with absolutely no transparency whatsoever, and a verdict that is completely unjustified are not acceptable in terms of international rules-based law," Garneau said.

But China's ambassador to Canada, Cong Peiwu, insisted Spavor's trial was fair and open and he accused Trudeau and Garneau of making "unwarranted" and "groundless accusations" about China's justice system.

Their reaction to the sentence "grossly interfered in China's judicial sovereignty and seriously breached international law and the basic norms governing international relations," Cong said in an interview.

Asked whether Meng's release would result in freedom for the two Michaels, Cong insisted that the cases are unrelated.

"Those cases are totally different in nature," he said, accusing Canada of arbitrarily detaining Meng as part of a "political incident concocted by the United States."

Still, he added: "Our main obstacle in our bilateral relationship is the Madame Meng incident and we do urge the Canadian side to reflect on the issue and to take action sooner rather than later to correct mistakes and release Madame Meng and to ensure her safe return to China so as to remove the main obstacle between our two countries."

Spavor's sentencing followed a Chinese court's decision on Tuesday to uphold the death penalty for another Canadian, Robert Schellenberg, for alleged drug smuggling. Schellenberg had originally been sentenced to 15 years in prison but that was upgraded to execution shortly after Meng's arrest.

The ambassador noted that Schellenberg's sentence must still be submitted to the Supreme People's Court for a final review before it can be carried out.

Kovrig stood trial in March but there has been no word on when a verdict might be announced.

Asked whether Canada was negotiating over possibly sending Meng home in exchange for the release of Spavor and Kovrig, Canadian Ambassador to China Dominic Barton said, “There are intensive efforts and discussions. I don't want to talk in any detail about that. But that will continue.”

Garneau also would not comment on whether there are discussions about an exchange, only saying that Canadian diplomats in China and the U.S. have put in "considerable and intense work" on the file.

"This work will continue to go on with the aim of arriving at the result of freeing the two Michaels," Garneau said, adding U.S. President Joe Biden has indicated his administration is treating them as if they were American citizens detained by China.

Spavor's sentencing also prompted an unusual joint show of support for Canada by the United States and 24 other governments.

Diplomats from the United States, Japan, Britain, Australia, Germany and other European countries plus the European Union gathered at the Canadian Embassy in Beijing in a show of support. They also have issued separate appeals for Spavor and Kovrig to receive fair trials or to be released.

U.S. Secretary of State Antony Blinken called for their immediate and unconditional release.

"The practice of arbitrarily detaining individuals to exercise leverage over foreign governments is completely unacceptable," Blinken said in a statement.

The Chinese government has released few details other than to accuse Spavor of passing along sensitive information to Kovrig.

Spavor worked in China but had extensive links with North Korea in tourism and other commercial ventures that brought him into contact with the isolated communist state’s leadership.

“He obviously had a different view on that,” the ambassador said.

Barton met with Spavor after the sentencing and said he sent three messages: “Thank you for all your support, it means a lot to me. Two, I am in good spirits. And three, I want to get home.”

"We know that the practice of

"We know that the practice of arbitrary detention with a mock, sham trial with absolutely no transparency whatsoever, and a verdict that is completely unjustified are not acceptable in terms of international rules-based law," Garneau said.

Hmm, that sounds like an apt description of the situation that Julian Assange finds himself in simply for revealing the truth about American war crimes in Iraq. The hypocrisy of the Canadian and American governments is beyond belief. Why did the Canadian government play the role of toadie to the US by detaining the chief financial officer of the Chinese firm for what are obviously political reasons?