Wildfires in Algeria kill 42, including 25 soldiers trying to rescue people 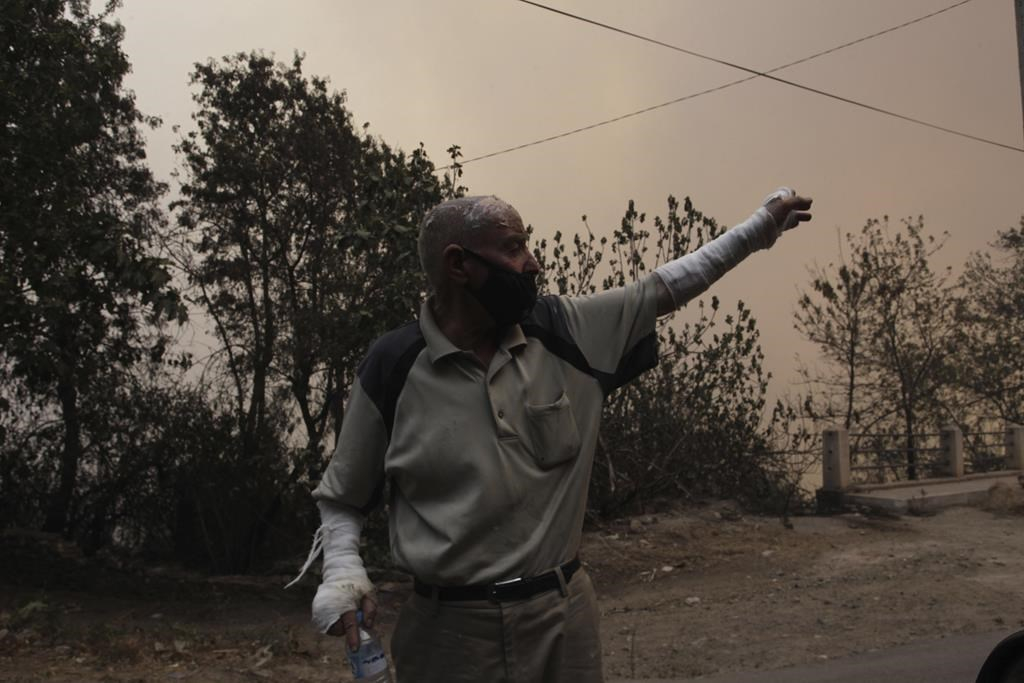 A man flees a village near Tizi Ouzou some 100 km (62 miles) east of Algiers following wildfires in this mountainous region, on Tuesday, Aug. 10, 2021. Photo by The Associated Press/Fateh Guidoum
Previous story
Next story

At least 25 soldiers died saving residents from wildfires ravaging mountain forests and villages east of Algeria's capital, the president announced Tuesday night as the civilian toll rose to at least 17.

President Abdelmadjid Tebboune tweeted that the soldiers were “martyrs” who saved 100 people from the fires in two areas of Kabyle, the region that is home to the North African nation's Berber population. Eleven other soldiers were burned fighting the fires, four of them seriously, the Defense Ministry said.

Prime Minister Aïmene Benabderrahmane later said on state TV that 17 civilians had lost their lives, raising the count of citizens from seven previously and bringing the total death toll to 42. He provided no details.

The mountainous Kabyle region, 100 kilometers (60 miles) east of Algeria’s capital of Algiers, is dotted with difficult-to-access villages and with temperatures rising has had limited water. Some villagers were fleeing, while others tried to hold back the flames themselves, using buckets, branches and rudimentary tools. The region has no water-dumping planes.

The deaths and injuries Tuesday occurred mainly around Kabyle's capital of Tizi-Ouzou, which is flanked by mountains, and also in Bejaia, which borders the Mediterranean Sea, the president said.

The prime minister told state television that initial reports from security services showed the fires in Kabyle were “highly synchronized,” adding that “leads one to believe these were criminal acts.” Earlier, Interior Minister Kamel Beldjoud traveled to Kabyle to assess the situation and also blamed the fires there on arson.

“Thirty fires at the same time in the same region can’t be by chance,” Beldjoud said on national television, although no arrests were announced.

There were no immediate details to explain the high death toll among the military. A photo pictured on the site of the Liberte daily showed a soldier with a shovel dousing sputtering flames with dirt, his automatic weapon slung over his shoulder.

Dozens of blazes sprang up Monday in Kabyle and elsewhere, and Algerian authorities sent in the army to help citizens battle blazes and evacuate. Multiple fires were burning through forests and devouring olive trees, cattle and chickens that provide the livelihoods of families in the Kabyle region.

The Civil Protection authority counted 41 blazes in 18 wilayas, or regions, as of Monday night, with 21 of them burning around Tizi Ouzou.

A 92-year-old woman living in the Kabyle mountain village of Ait Saada said the scene Monday night looked like “the end of the world.”

“We were afraid,” Fatima Aoudia told The Associated Press. “The entire hill was transformed into a giant blaze.”

Aoudia compared the scene to bombings by French troops during Algeria's brutal independence war, which ended in 1962.

“These burned down forests. It’s a part of me that is gone,” Aoudia said. “It’s a drama for humanity, for nature. It’s a disaster.”

An opposition party with roots in the Kabyle region, the RCD, denounced authorities’ slow response to the rash of blazes as citizens organized local drives to collect bottled water and other supplies. Calls for help, including from Algerians living abroad, went out on social media, one in English trending on Twitter with the hashtag #PrayforAlgeria. Photos and videos posted showed plumes of dark smoke and orange skies rising above hillside villages or soldiers in army fatigues without protective clothing.

Climate scientists say there is little doubt climate change from the burning of coal, oil and natural gas is driving extreme events, such as heat waves, droughts, wildfires, floods and storms. A worsening drought and heat — both linked to climate change — are driving wildfires in the U.S. West and Russia's northern region of Siberia. Extreme heat is also fueling the massive fires in Greece and Turkey.