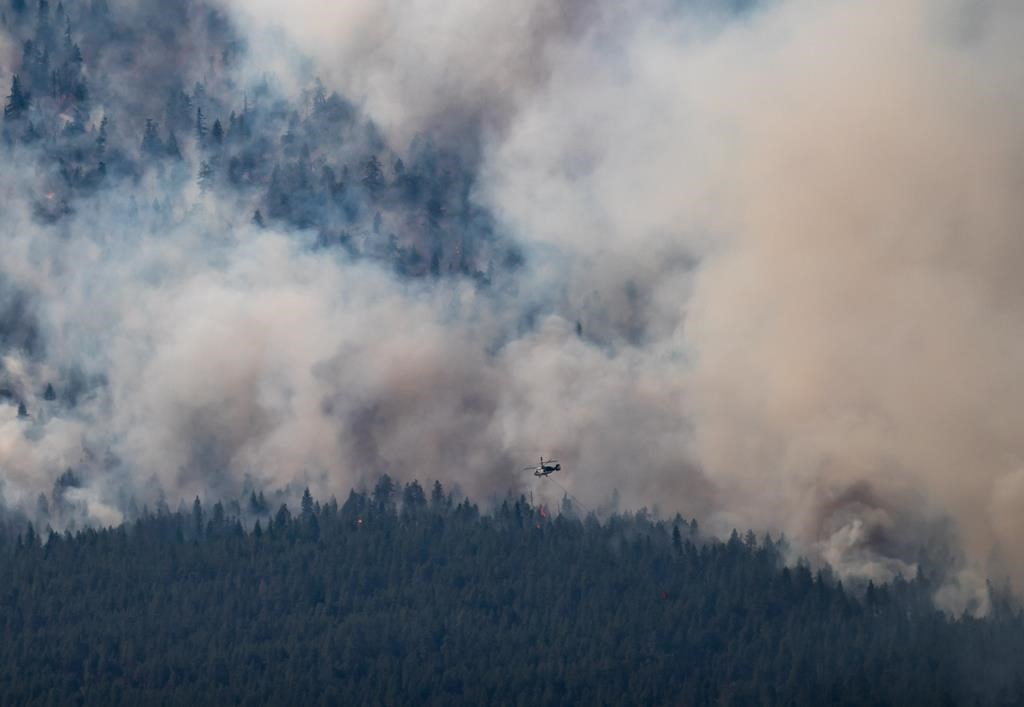 A helicopter pilot flies past a wildfire burning in Lytton, B.C., on Thursday, July 1, 2021. File photo by The Canadian Press/Darryl Dyck
Previous story
Next story

Heat warnings and special weather statements cover most of southern British Columbia as temperatures are forecast to soar through the weekend, magnifying anxiety about wildfire risk.

Environment Canada says humidity will make it feel like the mid- to high 30s across the south coast and inland sections of the north and central coasts, while it could feel hotter than 40 C in parts of the Interior as heat arrives there on Thursday.

The BC Wildfire Service fire-danger map shows risk levels have returned to high or extreme across southern Vancouver Island and most of the central Interior following last weekend's showers.

Public Safety Minister Mike Farnworth told a news conference Wednesday that the wildfire service is concerned about the potential for more fires following the heat wave.

"Obviously lightning strikes are something that are not controlled, but clearly human-caused fires continue to be a concern because they are preventable," he said, adding that fire crews are keeping an eye on potential hot spots.

With no rain in the forecast and roughly 270 fires raging in B.C., the risk is expected to rise sharply along with the temperatures and gusty winds over fires such as the 556-square-kilometre White Rock Lake blaze between Kamloops and Vernon.

More properties have been lost to that voracious wildfire in B.C.'s southern Interior.

The Regional District of Central Okanagan said in a statement Wednesday that an aerial survey of the Bouleau Lake area, west of Vernon, determined at least six structures on four properties had "significant damage."

The district says the area remains under an evacuation order and it's not yet safe for inspectors to do a ground survey to assess the losses.

The wildfire has now grown to 565 square kilometres in size and is the same blaze that swept through Monte Lake and surrounding communities last week, destroying homes and businesses.

The fire has moved eastward since then, prompting evacuation orders and alerts by four regional districts, two First Nations and the City of Vernon, while orders or alerts for other communities, including Falkland, Armstrong, Chase and the Spallumcheen township, have since been lifted.

Nearly 6,600 square kilometres of trees and bush have burned in B.C. since the start of the wildfire season on April 1 and the wildfire service says more than 30 fires considered threatening or highly visible dot all corners of the province.

The wildfire service says a blaze sparked a month ago in the Fraser Canyon just south of the devastating June 30 Lytton fire now covers 38 square kilometres.

Northerly winds are in the forecast and there's concern they could push flames toward the canyon community of Kanaka Bar.