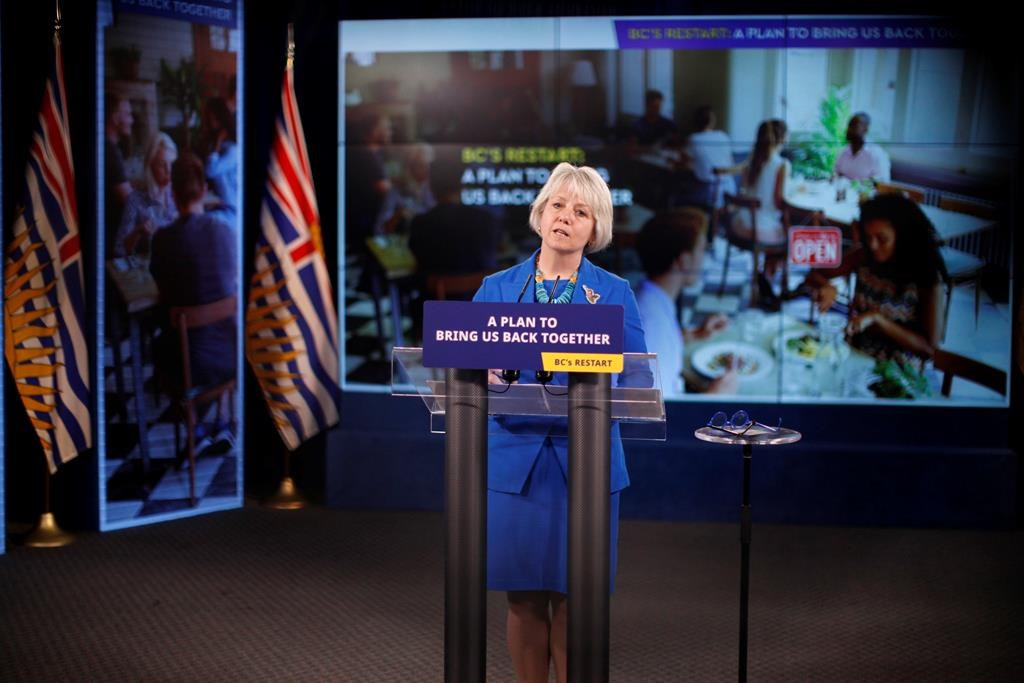 Provincial Health Officer Dr. Bonnie Henry talks about B.C.'s plan to restart the province during a press conference at Legislature in Victoria, B.C., on May 25, 2021. File photo by The Canadian Press/Chad Hipolito
Previous story
Next story

A surge in COVID-19 cases spurred by the Delta variant is prompting British Columbia health officials to enact mandatory vaccine requirements for all staff and volunteers at long-term care and assisted living sites.

Provincial health officer Dr. Bonnie Henry said Thursday that people living in such settings are at particular risk and transmission from unvaccinated people has led to outbreaks.

"I recognize that this is a change from the direction we announced earlier in the spring and June, where we thought it would be sufficient to have additional measures such as testing in place," Henry said. "We have now seen with the transmission of the new variants that we need extra protection in this highly risky situation."

Staff, volunteers and personal service providers are expected to be vaccinated by Oct. 12, and those who haven't had their shots in the meantime must wear masks and additional protective gear and be tested regularly, Henry said.

Immunization data will be collected by the Public Health Office and will be used by officials to determine where vaccination efforts should be focused.

When asked if other B.C. businesses should be able to hire or fire staff based on their vaccination status, Henry said she supported businesses making decisions that allow staff to remain safe.

"The fact of an outbreak, I can tell you as minister of health but also as a family member, is incredibly disruptive and painful to residents of long-term care, families and everyone else," he said.

Dix said the government cannot predict if legal action would be taken against them for mandating vaccines in such a setting, but added that the government believes it is on a strong legal footing.

“There is significant evidence that vaccines are safe and effective and as health professionals who are leading the vaccination campaigns, it is the right call and an appropriate step,” Dr. Ann Collins, the president of the association, said in a statement last week.

Quebec's health minister said during a news conference this week the province was looking at making COVID-19 vaccinations for health-care workers mandatory in the province.

Both Ontario and Alberta have said they wouldn't make vaccinations mandatory for anything.

The B.C. General Employees’ Union, which represents more than 23,000 members in the health-care sector, including 4,800 in long-term care and assisted living, said the provincial government also needs to reintroduce single-site restrictions, which forbids employees from working at more than one care home.

"With the rapid spread of the Delta variant in B.C. and elsewhere, it's critical that our province takes the steps necessary to prevent the spread of the virus and protect our vulnerable neighbours and front-line workers," union treasurer Paul Finch said in a statement.

More than 80 per cent of eligible residents in the province have received a first dose of COVID-19 vaccine and about 72 per cent of people have been fully vaccinated.

The announcement comes as British Columbia's COVID-19 infection rate peaks to levels not seen since mid-May.

British Columbia reported 513 new cases of COVID-19 cases Thursday, with more than half occurring in the Interior Health authority.

There has also been one death, bringing the total number of fatalities to 1,779.

There are currently eight COVID-19 outbreaks in long-term care facilities in the province, including four in the Interior health authority, where the provincial health officer has tightened restrictions in the last two weeks.

The surge in cases in the central Okanagan has been attributed to the highly contagious Delta variant.