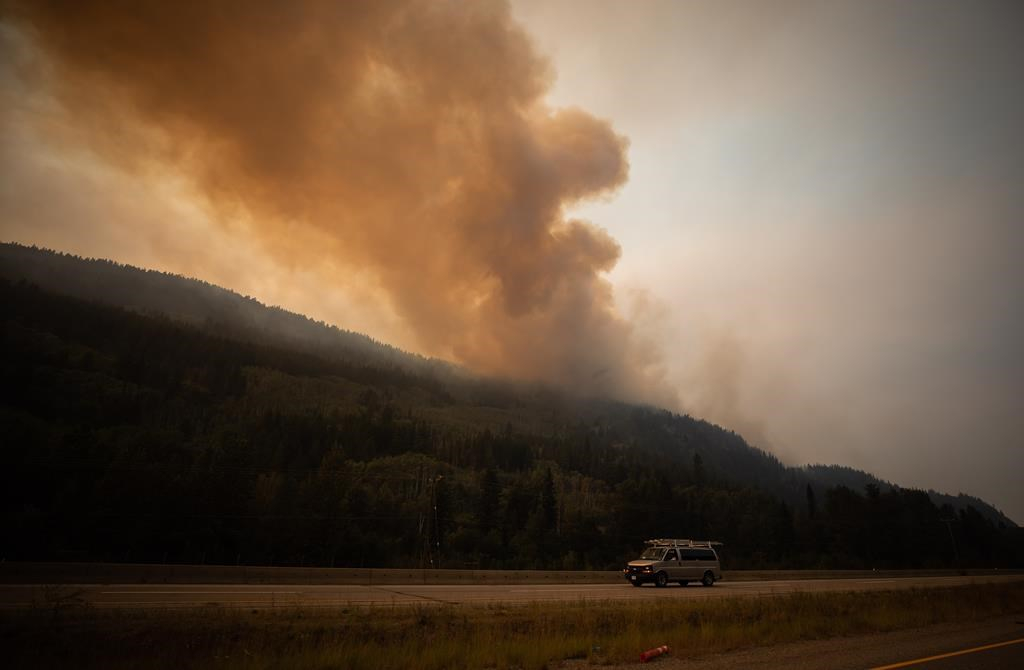 The July Mountain wildfire burns along the Coquihalla Highway south of Merritt, B.C., on Wednesday, August 11, 2021. Photo by The Canadian Press/Darryl Dyck
Previous story
Next story

Rick Manwaring said there's no rain in sight, temperatures are rising and gusty winds are expected across several parts of southern B.C.

"With the heat comes lower relative humidity values and increased activity on these fires," he told a news conference Thursday.

Humidity is one of the biggest factors in wildfire behaviour and at this time of the year, crews are looking for what they call "recovery," Manwaring said.

"So, as the sun goes down in the evening and nighttime comes, the relative humidity begins to climb on the land base, and wildfire activity drops," he said.

Fire personnel usually take advantage of cooler temperatures at night to put in guards and take advantage of the decreased blaze behaviour, he said. But this year, they haven't had much of a dip in temperatures or an increase in humidity to help them, especially in the south-central part of the province, he noted.

"We're seeing continued fire behaviour overnight and it really limits our ability to make progress in the evening periods outside of the burning cycle."

BC Wildfire information officer Erika Berg said cooler temperatures are expected by Sunday, but wind is also forecast, along with a risk of dry lightning.

The service is preparing for more activity on some of the nearly 270 wildfires currently burning, along with the likelihood of new fire starts, she said.

Thirty fires are ranked as threatening or highly visible, including the 580-square-kilometre White Rock Lake wildfire between Kamloops and Vernon.

Heat, low humidity and wind gusts are working against firefighting cause in #BC. #Wildfires

Aggressive growth has already destroyed homes and businesses in Monte Lake, Westwold and Bouleau Lake and flames are now challenging crews working to protect properties on the flank of the blaze nearest the northwest shore of Okanagan Lake.

An evacuation order was issued for the District of Logan Lake on Thursday telling about 2,000 residents to leave the area immediately as the Tremont Creek wildfire moved in. Logan Lake is about 300 kilometres northeast of Vancouver.

B.C. has more than 50 evacuation orders in place and over 100 evacuation alerts posted, meaning that residents need to prepare to leave with little notice.

The province says more than 6,500 square kilometres has been burned since the start of the wildfire season on April 1.

Manwaring said they're starting to gain some control of the fires in the Prince George and Cariboo regions, but some of the bigger blazes may take some time to contain.

"But to be honest, some of these larger fires in south-central Interior, we're going to be fighting these right up until the snow falls."