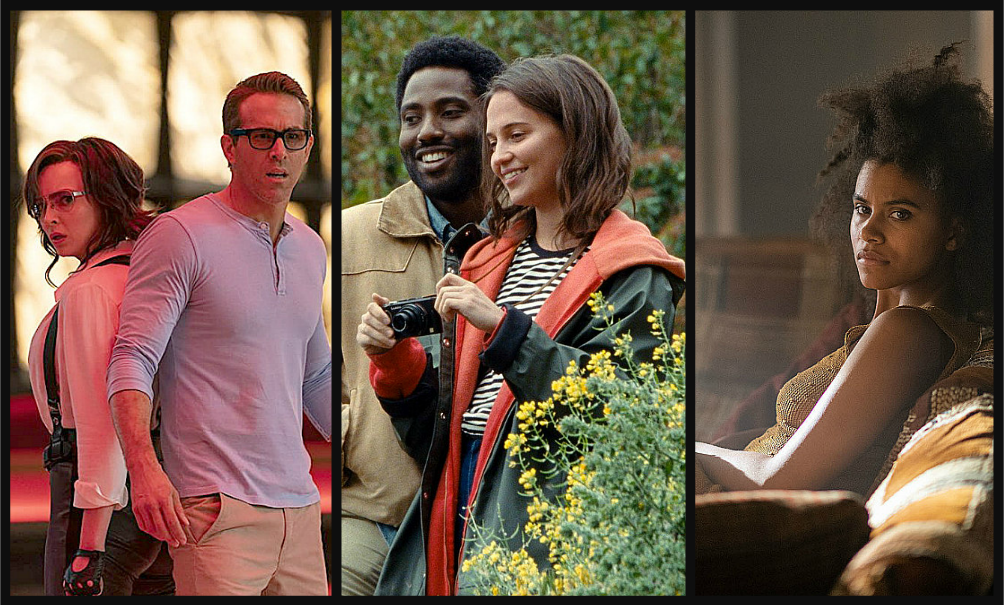 Also: Terror on a subway and a producer's scam in Hollywood.
Previous story

Vancouver product and favourite Ryan Reynolds stars in the week's big movie, but, ironically, another local connection doesn't. Aretha Franklin (no, she's not local, but one of the producers of Respect, the new movie about her, is). Bron Creative, based in Burnaby, has a lot of money in it, but the studio, MGM, didn't let critics out here preview it. They've offered clips and pictures, though, and Jennifer Hudson looks good as Aretha. Can she match Cynthia Erivo in her recent eight-part series, or Aretha herself in the concert film Amazing Grace? We'll see.

Meanwhile, we have these ...

FREE GUY: It took me a long time to get involved with this one. It is so geared to people who play online games, and, of course, is absolutely about them. To me, it felt artificial, which of course, is part of its milieu. Ryan Reynolds plays a bank teller named Guy who endures repeated robbery attempts by loud thugs with guns. He talks about “sunglasses people,” those who can do and get away with anything, and one day when he puts on a pair, everything changes. The city looks cartoonish; the people act differently, and he can leap as high as a skyscraper. He becomes an online sensation dubbed “The Blue Shirt Guy” when he helps people like a superhero.

There are people at computers watching all this, and we learn the world we see is inside a game they administer. People all over the world are playing it (think Fortnite and others), and Guy is a star. He's also an NPC (non-player character), which means he doesn't belong there, and soon figures out that it's all unreal. The story has to go through contortions to get us there. That's part of the non-connecting problem. Guy falls for and pursues a woman he finds there (played both inside the game and as a game creator by Jodie Comer). Eventually, this turns into a romantic comedy, though another storyline is far more involving. The game's owner (played with greedy menace by Taika Waititi, better known as a director) wants it shut down, the blue shirt guy eliminated, and a sequel created to earn more money. The film somewhat deals with those issues in the industry, but succeeds better as a dazzling visual effects show. It's fun, but thin. Vancouver's Reynolds stars; Montreal's Shawn Levy directed, and Boston hosted. (At theatres all over, including Scotiabank and 5th Avenue.) 3 out of 5

BECKETT: Here's a very involving version of a favourite movie story type: Vacationers who get involved in events in foreign countries they don't understand, are hard-pressed to survive, and are on the run almost all the way through. John David Washington is that guy here, named Beckett. He's in Greece, has a car accident one night on a country road in which his girlfriend (Alicia Vikander) dies, but is witness to something that will get him in trouble. The local police won't help; they try to kill him. The American embassy is non-committal, but a German woman in a protest movement (Vicky Krieps) is very interested in his story.

They both end up at a giant political rally in Athens, though by that time Washington has been shot, stabbed and beaten, patched up and aided by people he meets. Not the U.S. embassy, though. His contact there has ulterior motives, probably involving a government financial controversy, a growing left-wing threat and a heavily-contested election in which a candidate's son has been kidnapped. Italy's Ferdinando Cito Filomarino directs his own story and cranks up the tension perfectly. I had only one problem: Something improbable kicks off the story. The rest thrills very well. (Netflix.) 3½ out of 5

NINE DAYS: This one asks deeply philosophical questions (What is life? What do we do to make the most of it? Do we deserve to be here?), and still works as a movie. It's mesmerizing, situated in a sort of limbo, not on the way to death, but birth. The mechanics aren't too clear, but we have a professorial man (Winston Duke) interviewing candidates to fill a vacancy. A piano prodigy who he has been promoting committed suicide. He blames himself for missing the warning signs and is emotionally committed to finding a replacement. He and an aide watch their candidates on VHS tapes on TV monitors. How all this works is never explained.

New candidates Bill Skarsgård, Zazie Beetz, David Rysdahl, Tony Hale and Arianna Ortiz arrive and are put through a nine-day evaluation. They have to answer wrenching questions like: Would you kill your son to prevent a guard in a concentration camp from doing it? Duke yells like a guard when he asks. To another question, they have to say why a competing candidate doesn't deserve to be alive. Only one will be chosen to come alive. The contest is mysterious and at times eerie, constructed with moody atmosphere by writer-director Edson Oda. He's from Brazil and learned his ways making short films and music videos. This one is a thoughtful fantasy. (International Village.) 4 out of 5

MATERNA: If you've ever been on a bus and witnessed an apparently disturbed person getting on and threatening, you'll identify with his small but powerful film by David Gutnik. It starts on the New York subway, where a man yells that it's taking him too long to get there, he has a meeting; and then, he doesn't have a job. And what are you looking at? Four women watch all this very uncomfortably.

It's a scene we'll keep going back to as the film shows us the lives of those four women. Three have problems with their mothers. The fourth is going to visit her brother after an argument at a family dinner (also a mother problem, but more oblique). Each of their stories is a fine and moving vignette. One is nagged by her mother to get in a better line of work. One is reminded that her acting ambitions aren't working out. The most compelling is a woman's memories of visiting family in Kyrgyzstan and learning the hidden truth of how her father died. There are hash words with her mother, and her grandmother. Together, those stories show what's really going on in that subway car and set up a shocking conclusion. The film manipulates, but it works. It won two awards at the Tribeca Film Festival, one for acting, one for cinematography. (Out now on demand or digital.) 3½ out of 5

THE COMEBACK TRAIL: This film aspires to be a tough and funny critique of Hollywood. It gets in a few shots, but is pretty mild most of the time. It's a remake; the original may have seemed more potent 40 years ago. We've become used to stronger stuff since then, so enjoy the lighter hits if you're into it. Here's a weird little bit of trivia. The film has 32 executive producers. Maybe there were too many cooks.

The plot resembles The Producers, the film about a Broadway show designed to fail. Here the head (Robert De Niro) of a small film company (Miracle Studios with Killer Nuns, its latest flop) owes money to the mob. Its leader (Morgan Freeman, in a rare bad guy role) gives him 72 hours to pay up. “After that, I choke you to death.” A bright idea emerges: Bring back an old cowboy star, make him do a stunt that'll kill him, and collect the insurance. Buster Crabbe played him back in 1982; this time it's Tommy Lee Jones. He needs help getting on a horse, but once up there, he's revitalized and enjoys himself. Worse: He can't be killed. Some jokes work, mainly those about the pretensions of second-rate people in the industry. The others are pretty obvious; easy shots. There's a nice visit to a legendary location, though: Lone Pine, Calif., where many westerns were filmed. (Streaming Prime VOD and EST.) 2½ out of 5