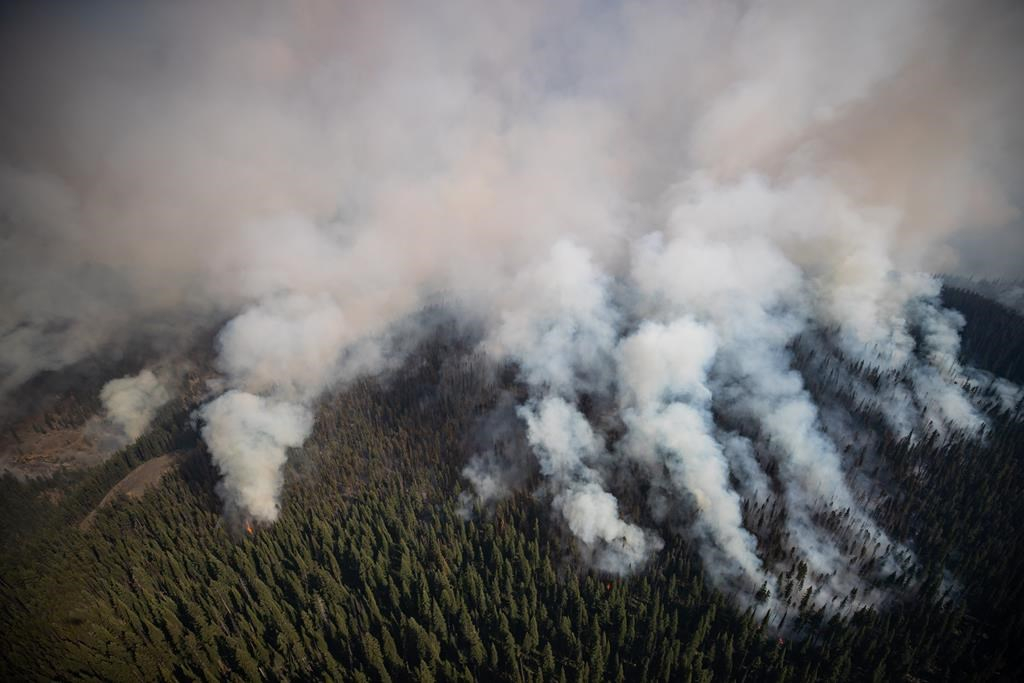 Winds forecast to fan wildfires over the weekend in British Columbia are a "direct threat to life and property," a BC Wildfire Service official says.

The provincial government is asking tourists to leave, or avoid, the communities of Armstrong, Spallumcheen, the Okanagan Indian Band and parts of the Regional District of North Okanagan in the southern Interior.

"While we're acting out of an abundance of caution, the situation is very serious and could very well get worse quickly," he said in a media briefing Friday.

Farnworth acknowledged the rise in wildfires in the province can be linked to climate change and will be something the government needs to plan for.

Cliff Chapman, director of provincial operations for the wildfire service, said forecasters expect to see winds up to 30 kilometres per hour on Saturday and double that on Sunday, fanning the flames of some of British Columbia's largest fires.

Chapman said if the winds arrive, the wildfire service expects to see aggressive fire behaviour in forests that are tinder dry from recent heat waves, with the potential for embers to push out ahead of the blaze creating significant growth.

More than 1,488 wildfires have been started since April 1, burning more than 6,000 square kilometres.

The community of Logan Lake, southwest of Kamloops, was ordered to evacuate Thursday night, sending thousands fleeing from their homes due to the 380-square-kilometre Tremont Creek wildfire.

Logan Lake Mayor Robin Smith said municipal fire crews have come from as far away as Elkford, Mackenzie and Burnaby to help put up sprinklers to protect area homes.

A forecast for winds of up to 60 km/h on B.C. wildfires is a 'direct threat to life'. #BC #Wildfires

"I do want to just congratulate the community in evacuating in a safe and orderly manner," she said.

"We did manage to get everybody out fairly quickly, so that was encouraging for us."

Vancouver Coastal Health and Providence Health Care said in a statement that they are working with the Interior Health authority to house seniors from an Armstrong, B.C., long-term care home who have been displaced by the wildfire.

Residents of some communities have been critical of the actions or inactions of the service after homes and businesses were lost last week as the White Rock Lake wildfire was fanned by high winds.

Farnworth said those who are asked to leave their properties need to do so, or risk endangering the lives of firefighters and first responders.

"Evacuation orders are put in place to protect lives," he said. "When people ignore that, then what often happens ... is firefighters can be diverted from fighting fires to rescue them."

Forests Minister Katrine Conroy reinforced that plea, adding that she understands residents may be hesitant, but they need to leave their homes immediately when given the order.

Environment Canada said a heat wave gripping much of southern and coastal B.C. should ease by Sunday and could be replaced by showers in some areas. But there's concern the shift could also bring lightning, creating the potential for more wildfires.

Public health officials in the Vancouver Coastal Health and Fraser Health authorities said they are concerned about the rise in temperatures expected over the coming days.

"This is considered an emergency situation," said Dr. Michael Schwandt, a medical health officer with Vancouver Coastal Health. "It can be a life-or-death situation for many people."

He added that his health authority has received feedback from the public on how it managed the "heat dome" event in late June that contributed to the deaths of hundreds of people.

The number of cooling centres has been increased, as has the work being done on outreach.

"We can always improve and constantly improve. This is climate change adaptation and will be a topic for years to come," Schwandt said.

Dr. Ariella Zbar, a medical health officer with Fraser Health, said there are also concerns about the harm posed by wildfire smoke.

She urged children, seniors and those with pre-existing health conditions to limit the amount of time they spend outdoors to reduce the risk posed by smoke.

The district said outflow winds are bringing smoke from wildfires burning in B.C. and Washington state into the region.