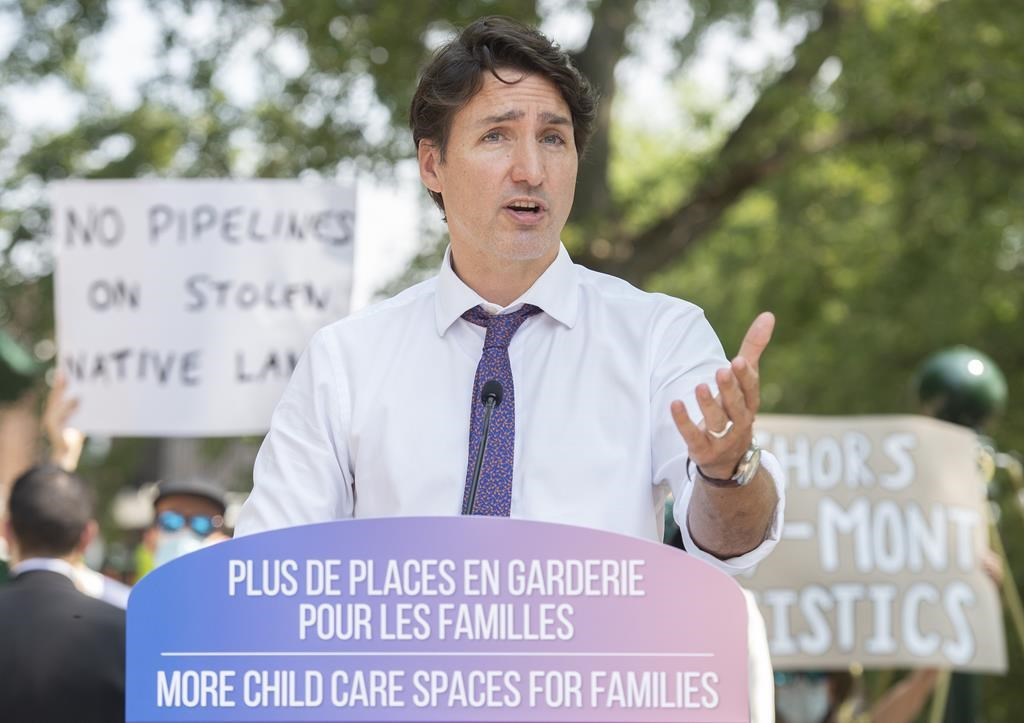 Evidence that a federal election is on the horizon continued to mount on Saturday as the Liberal party unveiled a series of campaign-style advertisements a day before the widely anticipated vote is expected to be called.

The party's ad blitz features Prime Minister Justin Trudeau, who sources have previously indicated will visit Gov. Gen. Mary Simon on Sunday with a request to dissolve Parliament and trigger an election that is expected to culminate in a Sept. 20 voting day.

The English-language ad, titled "Relentless," features shots of Trudeau engaging with Canadians before and during the global outbreak as well as a voice-over exhorting Canadians to keep "moving forward."

The French-language ad, titled "Solidarity," shows the Liberal leader talking about the resilience of Canadians during the pandemic and his government's work to support them.

"Since the beginning (of the pandemic), we helped workers and businesses keep their heads above water," Trudeau said in the French-language ad.

"We made sure we had vaccine doses, and we helped the provinces distribute those doses faster."

The adds will begin airing on TV over the next week as part of a broader digital engagement strategy, the party said in a statement.

New Democrat Deputy Leader Alexandre Boulerice lost no time in criticizing the contents of the Liberal ad campaign, saying life in Canada under Trudeau's government has become more expensive while the income of working Canadians has not increased.

"Justin Trudeau says nice things but has no intention of doing what's needed to truly help people," he said in a statement.

The Conservatives have not yet unveiled their full election ad campaign, but have already drawn fire from within their own ranks for a clip released on Friday.

The ad, which depicts Trudeau's face pasted on top of an image of a bratty character from classic children's film "Willy Wonka and the Chocolate Factory," was roundly condemned by sitting Conservative MPs as juvenile and ill-suited to a high-stakes event such as a federal election.

"I trust the decision maker who decided to post this tasteless and appalling video will be brought up to speed."

The party did not immediately respond to request for comment on the ad.

Conservative Leader Erin O'Toole has previously indicated he doesn't want to campaign during a fourth wave of the COVID-19 pandemic, but that he's ready if Trudeau decides to call an election.

"We are going to have a totally different approach from Mr. Trudeau on the economy, on jobs, on emergency programs," he said.

NDP Leader Jagmeet Singh issued a blueprint for the party's election platform on Thursday, promising universal pharmacare and dental care, a $20 minimum wage and student debt cancellation among other pledges.

Titled "Ready for Better," the 115-page document takes aim at high earners and big business while stressing social welfare in an echo of the NDP platform from two years ago.

“Tax the ultrarich to invest in people. That’s our plan. And really no other party is willing to say those words," Singh told reporters in St. John's, N.L., on Thursday.