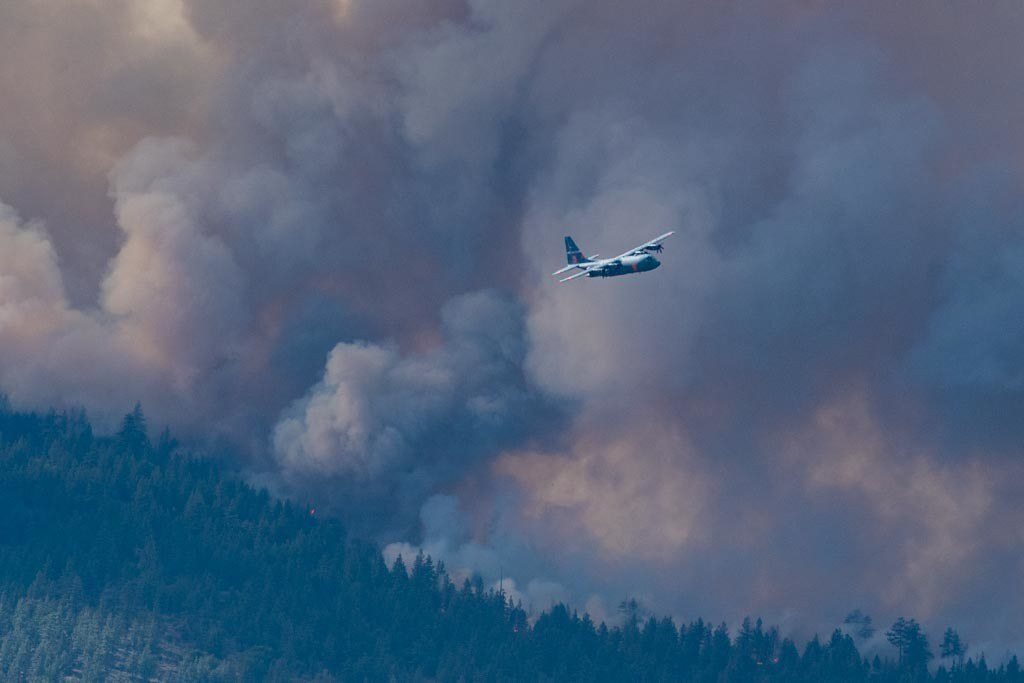 Air National Guard C-130, MAFFS 9 out of Reno, Nev., flying over the plumes of smoke after dropping retardant on the Beckwourth Complex Fire on July 9, 2021, near Frenchman Lake in northern California. Photo by The National Guard / Flickr (CC BY 2.0)
Previous story
Next story

U.S. President Joe Biden’s cabinet has so far had a mixed administrative track record on climate change: It has issued ambitious, unprecedented executive orders and prioritized legislative spending to take on the crisis, but it’s also waffled on pipelines, approved countless drilling permits, and eased coal regulations. Now, the administration has taken one of its most damaging and immediately cataclysmic moves to date.

Last week, the U.S. Department of Agriculture’s Forest Service announced that it would pursue a strategy of all-out fire suppression in response to the wildfires engulfing California this summer — including and especially the deadly Dixie Fire, already the largest of its kind in the state’s history. The initiative orders federal fire employees to simply put out every conflagration in the United States as rapidly as possible. As a result, the Forest Service is mandating that firefighters ditch other methods for containment and prevention in the short term — including, perhaps most notably, controlled burns.

To be clear, and fair: The order is temporary, and the agency’s chief, according to the San Francisco Chronicle, has claimed that “given the dozens of wildfires raging across the West this summer … the agency’s limited resources need to focus solely on fire suppression.” The Forest Service has been beset by general administrative controversy and budget slashes for fire prevention over the years, and that, combined with this summer’s unprecedented fires, put it in a terrible position. But even a short pause in controlled burns will only make things harder for the already-strained Forest Service in future years, as more fatal wildfires inevitably proliferate.

Controlled blazes have been an Indigenous tradition for fire prevention and management for generations. When done right, they protect local environments in myriad ways: They strategically clear rampant brush and vegetation that provide more fuel for fires to spread, and they help certain trees and plants thrive by clearing new space for native growth, recycling soil nutrients, and spreading seeds from species and pinecones that have adapted to fire in especially prone areas. They give less room for wildfires to spread and allow nature to thrive — and they will be increasingly necessary for human habitats, especially those out West whose areas are warming and drying more by the day, thanks to climate change.

Such a concept can be difficult to accept and parse, however, when the uncontrolled flames reach your backyard. Much of the impetus for the Forest Service’s decision to halt controlled fires stemmed from popular backlash by Californians traumatized by the increasingly frequent and widespread infernos all around them. After all, not every controlled flame stays that way — in exceedingly rare but worrisome cases, some “good fires” can get out of hand and threaten local mammal and plant life as well as human real estate. Many Californians, already fearful of the fires at their door, understandably may not wish for the federal agency responsible for quenching those fires to start yet more fires that could threaten their homes.

Even Gov. Gavin Newsom is expressing reluctance about the efficacy of prescribed burns, with a spokesperson telling NPR that while Newsom “supports the science of ‘good fires’ … there are no ‘good fires’ in atrocious conditions.” In other words: In the midst of countless huge fires, an ostensibly safe use of one that could still spiral out of control is too much of a risk.

The #DixieFire is now the largest single fire in CA history.

Greenville in Plumas County has been completely destroyed by this fire - not dissimilar to what we saw in Paradise.

There are 8,500 firefighter personnel out here - thank you for your heroic & extraordinary work. pic.twitter.com/pavsSV69V2

— Office of the Governor of California (@CAgovernor) August 8, 2021

But, as always, what we may have here is a failure to communicate. At least, Arizona State University emeritus professor and longtime wildfire expert Stephen Pyne thinks so. “It’s a failure of the Forest Service to explain what they’re doing and why,” he told me in an interview. “We’re pretty good at controlled burns, but we need guidelines, and we need the public to understand these guidelines.” (Disclosure: ASU is a partner with Slate and New America in Future Tense.)

Even a short pause in controlled burns will only make things harder for the already-strained Forest Service in future years, as more fatal wildfires inevitably proliferate. #ClimateChange #Wildfires

The struggle to effectively communicate scientific processes is not limited to forest fires, of course. But when it comes to how important controlled burns are for protecting the environment and habitats for life, figuring it out is especially imperative. “As a strategy and gesture, the controlled burns ban is misguided,” Pyne also said. “It’s as if, with COVID, we were putting all our resources to distributing ventilators, but stopping mask mandates and vaccinations.”

The thing is, the Forest Service has been here before. In the early 20th century, as deadly blazes spread wildly and the federal government tightened its grip over Native lands, the agency adopted a policy of putting out all fires everywhere — including on the acres that Indigenous Americans were stewarding with occasional burns.

But by the 1960s, federal departments tasked with land oversight noticed not only that fire-dependent sequoia trees were in decline, but that the acreage affected by wildfires was increasing after the Forest Service started keeping regular track of areas left scorched at the beginning of the decade. As a result, the agency restarted controlled burn efforts, even though some researchers argue that the government still hasn’t set the right amount of prescribed fires needed for effective wildlife management — an amount that’s only increasing year over year as wildfires grow in size and density and prevalence.

To hear it from Pyne, there’s literally no reason not to keep using government-set fires, even with the risk of some of losing control. “Some kind of fire use is least expensive and most ecologically benevolent way” to prevent future, environmentally damaging conflagrations, as he told me. “Yes, some controlled fires will escape, but those escapes are just two per cent to three per cent — there’s no possible way to prevent all of them.”

And more commonly recognized firefighting techniques are inadequate for our current challenges: “Air attack with water tankers is only effective in early stages of fires. … but in wildlands, fires we put out are problems put off. You can’t prevent all of these fires in more natural settings. And managed fires have a small amount of failures, but sending tankers is a bigger failure. It’s not more caretakers and engines and planes — it’s about creating a better environment.”

How to make frightened civilians and policymakers understand this? Pyne thinks that government officials should be talking to people in especially fire-prone areas and taking them to demonstrations of control burns in certain areas of land to help educate them on prescribed fires, what they do, and why. But this is not an easy task, and an increasingly jittery populace vulnerable to wildfires — thanks in large part, to the Forest Service’s own historic neglect — may not have the time, patience, or willingness for this.

Plus, time is already running out to help Americans understand the complexities of this plight — and it’ll run out even more quickly if the Biden administration keeps halting controlled burns.