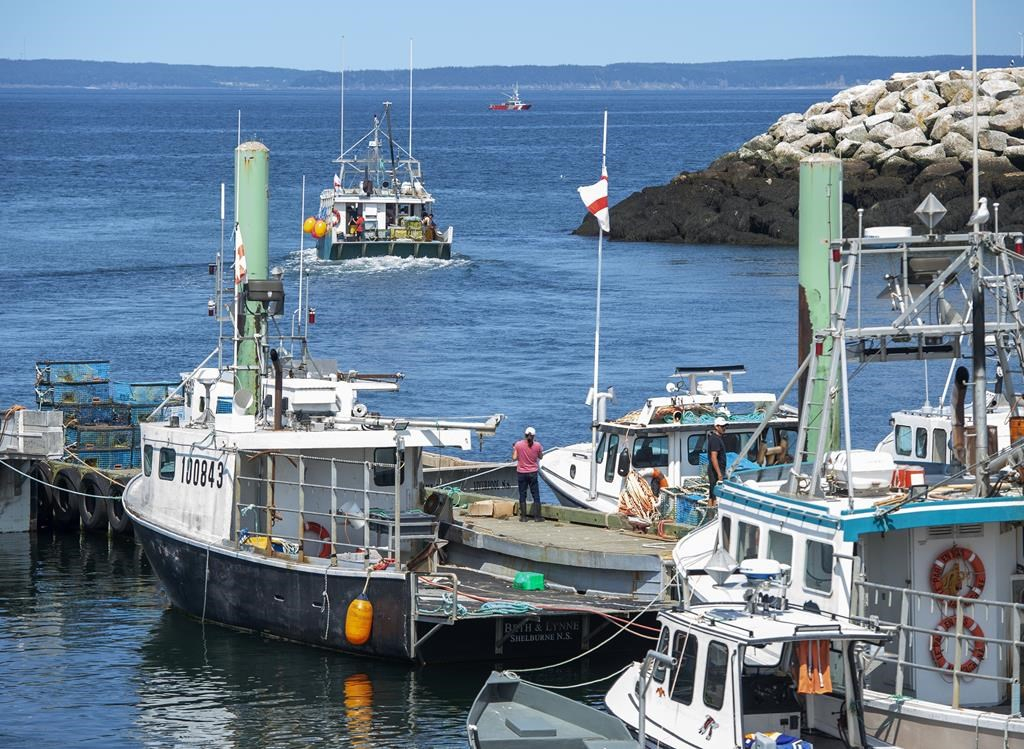 Fishing boats from the Sipekne'katik First Nation prepare for the start of its self-regulated treaty lobster fishery in Saulnierville, N.S., on Monday, Aug. 16, 2021. Photo by Andrew Vaughan / The Canadian Press
Previous story
Next story

SAULNIERVILLE, N.S. — The chief of Sipekne'katik First Nation was taken in for questioning by federal Fisheries Department officers on Monday, moments after he announced the expansion of his band's self-regulated lobster fishery in St. Marys Bay.

Chief Mike Sack says he was pulled over and arrested by fisheries officers shortly after he held a news conference at the Saulnierville Wharf, in southwestern Nova Scotia. He says he was held at the detachment in Meteghan, N.S., for about 45 minutes and questioned about the fishery before he was released.

“It's kind of a pity,” he said in a phone interview after he left the detachment, adding that the band had been in conversations with federal Fisheries Minister Bernadette Jordan last week about Sipekne'katik's fisheries. “It's not very neighbourly.”

Debbie Buott-Matheson, a spokesperson for the Fisheries Department, said in an email Monday, “fishery officers arrested an individual at the Saulnierville Wharf for alleged violations of the Fisheries Act. As this matter is now under investigation, no further comment will be provided.

“Anyone found to be fishing without proper authorization may be subject to enforcement action,” she added. “Improperly or untagged lobster traps will be hauled and seized.”

Before being taken in for questioning, Sack had launched his First Nation's lobster fishery — months ahead of the start to the federally regulated season, adding that he expected Fisheries Department officers to pull some of his band's traps out of the water because they aren't licensed by Ottawa.

Sack said his band, 65 kilometres north of Halifax, issued 13 fishers with so-called “treaty fishery” licences for boats operating in the province's southwest. He said he expected up to 20 fishers to participate with 50 traps each.

“There's nothing we can do,” he told reporters gathered at the wharf. “If they take our traps, we'll get more traps, and we'll fight them (the federal government) in court for the last ones taken.”

“It's unfortunate they come in, push their weight around and do what they want and aren't held accountable. For me, it's systemic racism.”

Federal regulation dictates that the area in question, LFA 34, has a season that runs from the last Monday in November until the end of May. Sack said the plan is for the band's fishers to stop harvesting on Dec. 15. The community says it will operate under the guidelines of its own fisheries-management plan, which Sack has said is based on sound conservation principles.

Jordan has said the First Nation's unauthorized fishery is concerning and her department will enforce the Fisheries Act. Sack called that statement “unfair.”

Last September, the band launched a self-regulated lobster fishery outside the federally regulated season, which led to violence and the burning of a lobster pound that stored Indigenous catch.

A 1999 Supreme Court decision allows Indigenous communities to fish for a moderate livelihood, though the court later clarified that Ottawa could regulate the treaty right for conservation and other limited purposes.

The Sipekne'katik band says it is no longer using the term “moderate livelihood fishery,” preferring “treaty fishery” instead.

“We're treaty people, and we have a treaty right to fish, so that's what we're calling it,” Sack told reporters.

The First Nation had recently operated its food, social and ceremonial lobster fishery, which is regulated by Jordan's department, but the fishery licence does not permit the sale of the catch.

Sack said during the news conference he's pleased there is more police presence in the area, adding “hopefully it keeps everyone safe.”

He says existing law and court rulings make clear that Ottawa has the power to enforce regulations to prevent out-of-season fishing by Indigenous groups.

“From our members' perspective, the enforcement that's taking place is a token of what needs to take place,” he said Monday in a telephone interview. “It is a pittance compared to the size of the commercial fishing effort that's happening illegally outside of the commercial seasons.”

Sproul said his group advocates for a peaceful resolution to the contentious issue and urges fishers to avoid any violence or illegal actions.

But the mood in the small communities surrounding St. Marys Bay is one of deepening frustration about the expansion of the non-regulated fishery, he said.

“Our first reaction is shock that events have been allowed to snowball as they are … while it's important the minister has made it clear that it's illegal to fish commercially outside of commercial seasons, it needs to be coupled with enforcement,” he said.

Are fisheries officers supposed to be able to actually arrest people? Like, are they actual cops in some sense? My aunt worked for fisheries for a lot of years, I never got the impression that arresting people was something they went around doing.

About 30 or more years ago,

About 30 or more years ago, DFO amended the Fisheries Act to enable fisheries officers to be armed. This was its response to a mass upsurge of resistance by inshore fishermen to monopolization and privatization of quotas. It really tore the mask off DFO's claim ad nauseam that its sole role was “conservation.” DFO also has been participating in a largely covert joint committee with the RCMP and Coast Guard in the Yarmouth area, whose role in fomenting the so-called racial conflict is very murky. Offshore, fisheries officers often travel of warships.