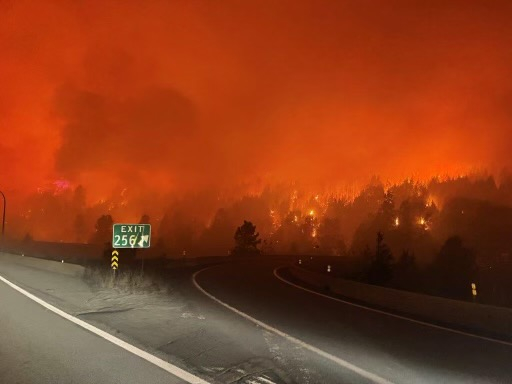 Wildfires have plagued B.C. all summer shrouding many communities in smoke. This fire closed the Coquihalla Highway 5 on August 15, 2021. Photo by: BC Ministry of Transportation and Infrastructure
Previous story

Smoke from the West Coast’s wildfires last year didn’t only tinge skies an apocalyptic shade of orange; it increased the number of COVID-19 cases and deaths.

According to research unveiled on Friday, the heavy wildfire smoke that blanketed Washington, Oregon, and California in 2020 significantly exacerbated the pandemic, causing 19,742 additional cases of COVID-19 and 748 additional deaths across the three states.

Although previous research has documented the connection between wildfire smoke and COVID-19, this is the first time that scientists have calculated the specific toll from the pandemic that is attributable to last year’s wildfires.

“We weren’t terribly surprised by the results as scientists,” said Kevin Josey, a postdoctoral fellow at the Harvard T.H. Chan School of Public Health who coauthored the new research. “But as humans, we are dismayed about the impacts.”

The study, which was published in the journal Science Advances, chalked those impacts up to fine particulate matter — called PM 2.5, because the particles are 2.5 micrometres or smaller in diameter — in wildfire smoke. Those tiny pieces of ash can comprise everything that a fire has burned in its wake, including heavy metals like iron, zinc, and nickel. When inhaled, these particles can lodge deep into the lungs, making people more susceptible to respiratory disease. PM 2.5 can even make its way into the bloodstream, increasing the risk of negative cardiovascular and neurological outcomes.

Previous research has suggested that this system-wide stress caused by inhaling small particulate pollution can make it easier for a mild case of COVID-19 to become a severe one, potentially causing more adverse symptoms in cases that would otherwise have been asymptomatic. Other studies have found evidence that PM 2.5 may weaken our antiviral immune response systems, allowing infections like the novel coronavirus to take greater hold in certain individuals.

As part of their new study, Josey and his coauthors looked at 92 counties in Washington, Oregon, and California, a selection that covered roughly 95 per cent of the states’ populations. They used satellite images and publicly available air quality records from March 15 to December 16 to calculate each county’s wildfire-related PM 2.5 exposure. Then, using county by county epidemiological data, the researchers calculated the per cent increase in COVID-19 cases and deaths associated with a daily increase of 10 cubic micrograms of PM 2.5.

For context, according to standards set by the Environmental Protection Agency, a 24-hour average PM 2.5 concentration of 35 cubic micrograms or less is considered safe. During the 2020 wildfire season, however, some counties exposed to wildfire smoke recorded PM 2.5 levels of 250 to 500 cubic micrograms or higher, sometimes for weeks at a time.

“These results provide strong evidence,” the study concluded, that in many counties, “the high levels of PM 2.5 that occurred during the 2020 wildfires exacerbated the health burden of COVID-19.”

Smoke from the West Coast’s wildfires last year didn’t only tinge skies an apocalyptic shade of orange; it increased the number of COVID-19 cases and deaths. #Wildfires #COVID

The study comes at a critical time, as the coronavirus delta variant sweeps through the United States and devastating wildfires in California and Oregon spread smoke across the country. According to Josey, the results create a further incentive for vaccination against COVID-19.

“If you’re protected from the disease itself, there’s no way for wildfire smoke or PM 2.5 to exacerbate the issue,” he said.

There’s also a big-picture takeaway, Josey added, about the need to address wildfire risks in the long term. Wildfires burn an estimated seven million acres of U.S. land every year — a staggering number that is only increasing due to climate change. As a result, millions of Americans are predicted to be at risk of “smoke waves” — periods of at least two days with unhealthy PM 2.5 concentrations from wildfires — by mid-century.

What on earth is a ‘cubic

What on earth is a ‘cubic microgram’? A microgram is an amount of mass of matter.

The original paper uses micrograms per cubic metre, and this is the unit that the author should have used. Perhaps a correction is in order.