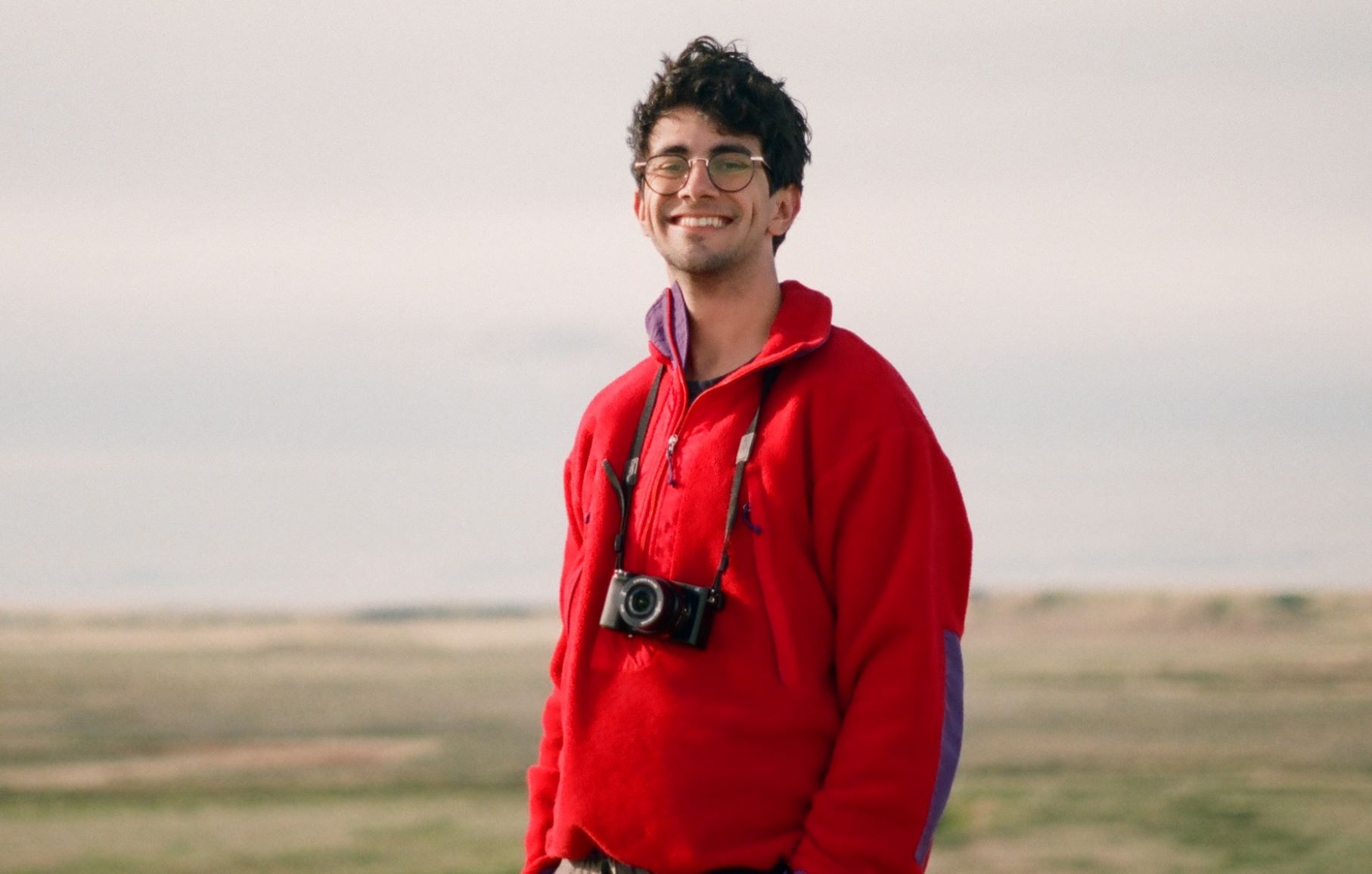 Fergus Linley-Mota is a recent SFU grad who hosted a dialogue with climate leaders on the role of cities in finding climate solutions. Photo submitted by Fergus Linley-Mota
Previous story
Next story

Even before this summer's catastrophic fires, floods and heat waves, young people have been calling on decision-makers to up their commitments made to combat climate action.

Among them is Fergus Linley-Mota, a 23-year-old recent Simon Fraser University graduate, who turned a self-directed university course into a global dialogue with major climate leaders earlier this May. The dialogue, held in tandem with SFU’s Morris J. Wosk Centre for Dialogue, brought together elected officials, civil servants, and civil society leaders to discuss the role of Canadian cities at this year’s upcoming COP26 UN climate conference. The importance of the COP26 conference is reflected in the recent IPCC report, described as a "code red for humanity" by the secretary general of the UN.

I sat down with Fergus to discuss how On the Road to Glasgow: Canadian Cities & COP26 started as a class project and turned into a global dialogue with lasting impact.

How will the involvement of Canadian cities make a difference in meeting the goals of COP26, and how does it differ from the current involvement of countries as stakeholders?

Put simply, cities are at the centre of the climate crisis in a much more direct, up-close-and-personal way than even countries. Cities account for over 70 per cent of the world's CO2 emissions and consume more than two-thirds of global energy. They also hold some of the keys to combating climate change: they are on the front line of transportation and land use planning and are the level of government that engages most closely with citizens. They are also centres of creative green innovations.

Canadian cities that are exemplifying taking this lead on climate include Halifax and Vancouver, which both have declared climate emergencies. Halifax has targeted action points to move the city to net-zero by 2050 through pledging concrete policies. Similarly, Vancouver has a climate emergency action plan that focuses on cutting carbon pollution from major sources. Cities are at the forefront of this battle, and it is so important they be given the support, recognition, and resources necessary to continue leading on climate.

At the core of this COP26 conference is the fact that global greenhouse gas emissions must be halved over the next decade, and reduced to net-zero by 2050, in order to limit global warming to 1.5 C. As part of the 2015 Paris Agreement, countries agreed to submit emissions reductions targets — called Nationally Determined Contributions, or NDCs — and update them every five years. Those updates are due this year. Canada’s federal government recently released new target pledges — a 40 to 45 per cent reduction in GHGs by 2030.

While this updated target is certainly an improvement, it is objectively not enough to get us to our net-zero targets. However, by strengthening the profile and collective voice of Canadian cities, we can spotlight work they are doing to reduce emissions and perhaps attract further support for that work from both private and public sectors. We can then look to the involvement of Canadian cities to push Canada further and further along the road to net-zero emissions.

Increasingly, we are seeing extreme weather, such as the heat dome in British Columbia and the floods in parts of Western Europe, exemplifying the inevitable effects of climate change. How do you reflect on these events in relation to the urgency of having conversations like The Road to Glasgow as a young person?

I think this question is really important, because it really gets to the root of what this is about. When you take a moment to peel back the multilateral negotiations, GHG emissions targets, mitigation and adaptation solutions, and all the various other jargon-filled (albeit, very important!!) areas of focus wrapped up in the COP conference, the fact is our world and our futures are in danger.

Youth should be setting the agenda for Glasgow's #COP26 meeting, says #SFU grad Fergus Linley-Mota, who recently hosted a dialogue on #ClimateSolutions. #ClimateCrisis

I and others in my generation have lived most of our lives with the spectre of climate change, of climate disaster, always looming large. And that does something to you. My friends and I regularly talk (and often joke, because you kind of just have to) about the deep sense of dread that we have all felt at some point or another when pausing to really consider the state of the planet we have inherited.

But along with some jaded cynicism, this feeling also makes me feel a kind of urgency — a sense that it’s time for an “all-hands-on-deck” approach. Because frankly, it’s now or never. So yeah, I would say that Cities on the Road to Glasgow was, at a personal level, a way to act on that urgency. And more importantly, it was an impact-driven conversation that zeroed in on a specific, but deeply important, area where dialogue could help foster positive progress on climate.

As a young person with a very real and long-term stake in the outcome of global efforts to mitigate and adapt to climate change, this is exactly the kind of conversation that I want our leaders to be having — a conversation focused on: where is there room for progress on climate action; who needs to be involved; and how can we make it happen?

Dialogue helps bring together stakeholders and people with different lived experience to share perspectives and identify solutions. What is the role of dialogue in climate conversations more broadly?

Climate change is a global problem, so perhaps more than any other issue, tackling it requires the participation of incredibly diverse stakeholders. At our roundtable session alone, we hosted over 40 leaders from different regions, levels of government, and civil society sectors, and although they were all broadly united on the need to combat climate change, they brought diverse considerations and approaches and priorities.

Dialogue is the most effective engagement tool because it brings together diverse viewpoints and experiences for the purpose of building mutual understanding and identifying tangible solutions. The approach grounded in active listening and trust-building enables dialogue to spur action in a collaborative way that moves beyond superficial pledges.

Why is it important for youth to spearhead projects like this?

Young people feel the profound emotional and mental effects of the climate crisis in a uniquely difficult way because we will bear the brunt of its physical effects. I think young people often feel excluded from the table when it comes to decision-making. They are often consulted by leaders and policymakers in a way that feels tokenistic, and are rarely allowed to steer the ship.

Empowering more youth to lead projects like this one, and engaging them more broadly on climate change — in ways that allow them to genuinely inform/direct projects or policy, that make them feel truly listened to — could go a long way to changing this. And by extension, a more engaged and empowered generation of youth could go a long way towards dealing with this climate crisis.

If more organizations and institutions — private and public — listened to youth, we would be a lot further ahead on this work than we are now. Until that happens, the door will be closed on all of the creativity and innovation that youthful, alternative perspectives can bring. In the context of climate, where existing blueprints have fallen short for so long, the need to both listen to youth and use the results to inform action has quite literally never been greater.

What were the results of On the Road to Glasgow: Canadian Cities & COP26 and where do you see your future involvements in the climate crisis taking place?

We compiled a report that highlighted the main takeaways from Cities on the Road to Glasgow. If anyone’s curious, the report is publicly available on the UNDP’s City2City Network website.

In brief: the discussion highlighted the need for cities to be formally recognized in Canada's next NDC, and receive appropriate resources and support as part of that process. Among other things, cities also expressed a desire to be part of an official “Team Canada” presence at COP26, with access to co-ordination support and daily briefings from the conference itself.

Following the dialogue, the SFU Morris J. Wosk Centre for Dialogue was approached to hold further dialogue sessions leading up to COP26 in order to help organize and galvanize this “Team Canada” ahead of the conference, and to continue to centre cities in that effort. As part of this pre-COP action, we will be putting on a second, larger iteration of Cities on the Road to Glasgow in October.

Our hope is that continuing with this kind of activity will help to ensure that Canada is a strong player at this pivotal conference, and that, partly through spotlighting the strong work of our cities, we can continue as a country to provide leadership in this global fight and do our best to meet — and exceed — our emissions targets.

What advice do you have for other young people and recent graduates who want to become advocates and shape their future of work to move climate action forward?

One thing that I would want other people in my position to know is that this project did not materialize overnight, and I had no idea that it would take shape the way it did. When I was given the chance to create a school project independently, the first thing that my supervisor (Shauna Sylvester) did was connect me with a handful of interesting people working in fields that I had identified as personally interesting — political science, international affairs, climate change, etc. — and I just spent hours in conversation, listening to their perspectives on the greatest challenges that we face. Through this process, combined with a healthy amount of my own research, I began to be more and more drawn towards the topic of cities as international climate actors, and eventually I was able to lead — with a lot of help — a project designed to create a real impact in that area.

What is one thing you want decision-makers to know about the climate crisis and the importance of the involvement of future generations in it?

I’ll give you three:

Fergus Linley-Mota is a recent graduate and is currently working as the program co-ordinator for Cities & COP26 at Simon Fraser University’s Morris J. Wosk Centre for Dialogue.

Claire Patterson is a recent graduate and is currently working as the marketing and engagement assistant at the Morris J. Wosk Centre for Dialogue.

As Canada's cities race against climate change, the urgency of finding solutions intensifies