Is there a method to Erin O'Toole's meme madness? 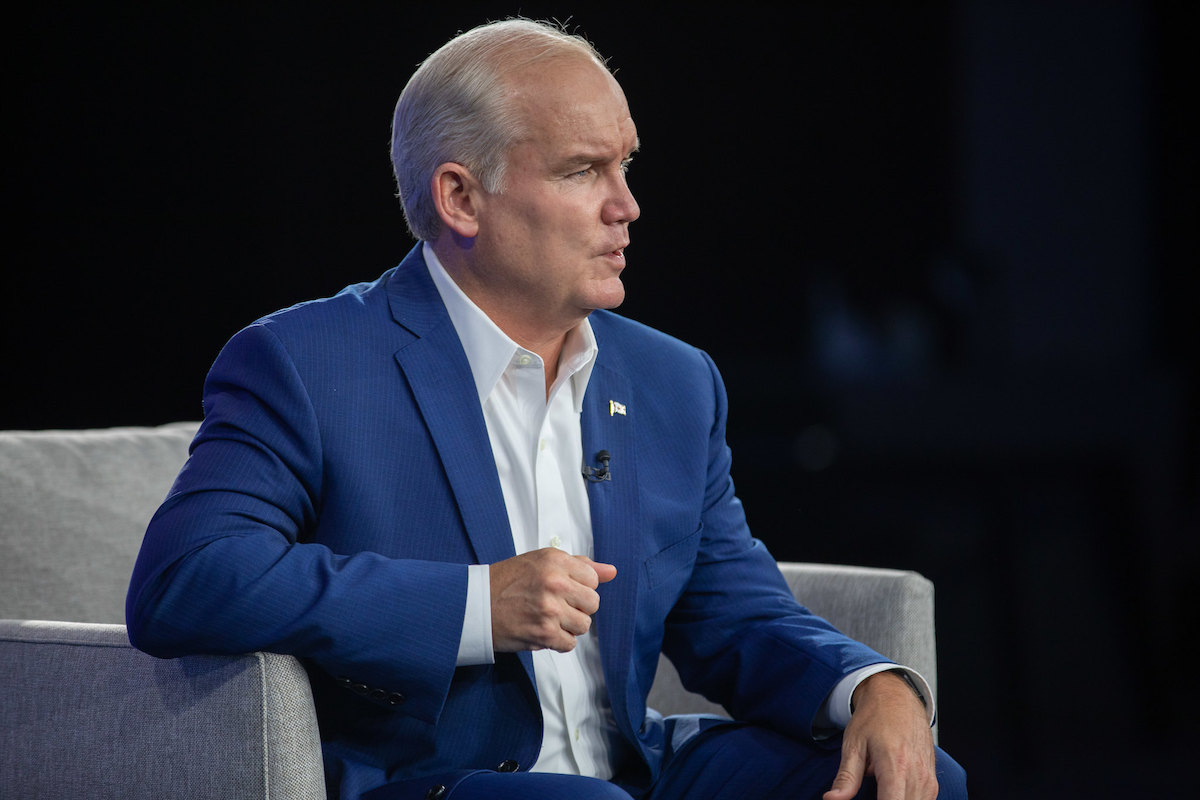 By now, you’ve probably seen the Conservative Party of Canada’s much-maligned Willy Wonka ad, as well as the blowback it’s created. What you might not know is that its juvenile tone and amateurish look, along with the popular reaction to it, was almost certainly by design — and that it’s part of a broader strategy being deployed by Erin O’Toole’s Conservatives. And while getting humiliated on Twitter might seem like a weird way to win an election, there may be a method to this madness.

The dark arts are no stranger to political campaigns in Canada, but this particular brand is relatively new. It’s also being imported from the United Kingdom and Australia by way of New Zealand, where a pair of young Kiwi strategists named Sean Topham and Ben Guerin helped both Boris Johnson and Scott Morrison turn the tables on their Labour opponents and win elections they were expected to lose. If they can steer the O’Toole campaign to victory, it would be the biggest feather in their digital cap yet.

As The Guardian reported in an October 2019 profile, “purposefully low-quality memes based around popular shows such as Game of Thrones were used in a bid to drive interactions — good or bad — at any cost, on the basis that this would boost the reach of future Facebook posts.” This sort of low-grade meme warfare, combined with the data analysis being provided by Stack Data Strategy (another Commonwealth import), is being deployed on the most important political front of our times: your aunt’s Facebook page.

The real question, of course, is whether this will work in Canada in 2021. The digital landscape has changed in recent years, and both governments and social media companies have focused more of their attention on ferreting out the disinformation that can spread online. They haven’t focused nearly enough resources there, given how conspiracy theories have spread digitally during COVID-19, but it stands to reason the techniques that worked in the past may not be as successful today.

O’Toole’s hired guns know a thing or two about those techniques, too. As The Guardian reported in 2019, Topham and Guerin were working as contractors at CTF Partners, a firm run by Sir Lynton Crosby (more on him in a moment) that used Facebook “to run a large-scale professional disinformation network on behalf of paying clients including major polluters, the Saudi Arabian government, anti-cycling campaigns and various foreign political campaigns.” Topham and Guerin, the reporting noted, “had oversight of dozens of these pages which sidestepped Facebook’s rules on transparent political campaigning, reaching tens of millions of people on behalf of paying clients while appearing to be grassroots independent news sources.”

But Canada isn’t the United Kingdom or Australia, and the messages and narratives that work over there don’t necessarily resonate here. Ironically, that was one of the lessons from the 2015 election, when Stephen Harper summoned the aforementioned Sir Lynton Crosby to help his flagging campaign — and ended up getting drubbed out of office. As the Toronto Star’s Stephanie Levitz and Alex Boutilier wrote back in May, “Johnson was able to win a minority in 2019 by targeting post-industrial towns with very similar demographics — but does a working class voter in Truro, N.S. share all that much in common with one in Surrey, B.C.?”

There’s also the fact the Murdoch family doesn’t have an iron grip on Canada’s media market the way it does in Australia and the United Kingdom. In those countries, the most powerful print and broadcast media organizations help socialize and validate the narratives that conservative meme warriors deploy on social media.

But in Canada, where Sun Media is little more than a bad memory, that’s far more difficult to do. And while conservatives here have clearly decided to use dubious online outlets like the Post Millennial and True North (which was given the first question of the campaign by O’Toole’s team) to fill that role, it’s not at all clear they have the reach or credibility to get it done.

Finally, a growing (if limited) body of evidence suggests the sorts of political memes being deployed by the Conservative Party of Canada only serve to reinforce people’s preconceptions — not change their minds. In a recent paper, titled “Meme Campaigning: The Effects of Political Campaign Memes on Canadian Voters,” recent master's graduate Amy Vachon-Chabot noted that “there was a very low percentage of voters who said they would ‘like’ or ‘share’ political memes on social media.”

All that said, it would be dangerous to write O’Toole off completely here. He won the CPC leadership by combining meme warfare with deep data analysis, and while his campaign has gotten off to a very rocky start, the memory of Donald Trump’s 2016 victory should still be in our collective memory. What looks like a bad campaign to some could still be resonant and motivating to others. If nothing else, this election will show whether the dark arts being deployed by the federal Conservatives actually work in Canada. And if they do, well, we may have an even bigger problem on our hands.

Also relevant here is who O

Also relevant here is who O'Toole hired as his digital campaign manager when running for leader---Jeff Ballingall of "Proud Boy" fame, co-owner of "Post Millennial." Remember reading about Stephen Harper's nasty entourage of con "boys in short pants?" These guys live to hack; Mark Zuckerberg is one of them; he's been quoted as saying he likes to "move fast and break things."
With all the "boyness" or more accurately, "bad boyness" among conservatives, and as a mother of boys, it's hard not to see this current iteration of conservatism as a protracted revolt against feminism. Witness what is called the "social conservatism" of their "base" but is actually just the good old entrenched patriarchy of religion that seems primarily driven by its desire to control women (note the avidity around abortion.)
As we watch the monstrous Taliban riding in the backs of their trucks, bristling and lethal, the problem with "rogue boys" gaining ANY societal power is starting to truly loom.

I don't think O'Toole won the

I don't think O'Toole won the Conservative leadership with memes particularly. He won it by seeming just bad enough for the crazies to be willing to vote for him (over Peter MacKay at least, who is far too obviously sane to ever get the crazy-Conservative vote), but just sane enough for some of the economic conservatives to vote for him. This was in part deliberate, clever positioning . . . the crazies are having a bit of buyer's remorse since then.
Unfortunately, there is no clever positioning that can, in my opinion, get a Conservative leader a majority in today's Canada. Economic Conservatism, laissez faire, small government, are currently less popular than usual. Crazy isn't very popular either. But if you're sane and not very economically conservative, why vote for a middle of the road Conservative when you could just vote for a Liberal? And if he goes too far Liberal-lite, the crazies will stay home or vote for people like Maxime Bernier or whoever hoists the crazy-Conservative flag.

Trudeau has more vulnerability to the left, where his pleasant left-ish, green-ish pablum discourse with nothing behind it is wearing thin for a lot of people who are really hoping for some actual action.

Endless gamesmanship aside (please), all you really need to know in this election is that if the anti-masker, anti-vaxxer, pro-conversion therapy, anti-abortion, anti-expertise, conspiracy theorist crap on the right isn't already enough to decide you about what party should govern the country, there's also the fact that the NOT PROGRESSIVE Conservative Party of Canada voted at their policy convention that climate change isn't actually real. So it's as simple as ABC, anything but conservatives.

In fairness "progressive conservative" is a contradiction in terms. I think Maclean's or some other very mainstream journos had the comment 20 years ago that "progressivism as a philosophy is so entrenched in Canada that one political party prefers to name itself with a contradiction in terms, to admitting that their basic philosophy is against it."

"Trudeau has more vulnerability to the left, where his pleasant left-ish, green-ish pablum discourse with nothing behind it is wearing thin for a lot of people who are really hoping for some actual action."

But we (there are two voters in our household) will still hold the local Liberal candidate in our back pocket as a last-minute mathematical strategy in the voting booth to keep the Conservatives out of power. A million strategic voters across the land dethroned Harper. A half million reduced the vacuous kid to minority rule in the next election. Our best hope is another minority, but with a stronger and more confident NDP partner backing them and influencing policy.

Math supersedes principle every time in the absence of proportionality in our electoral system.