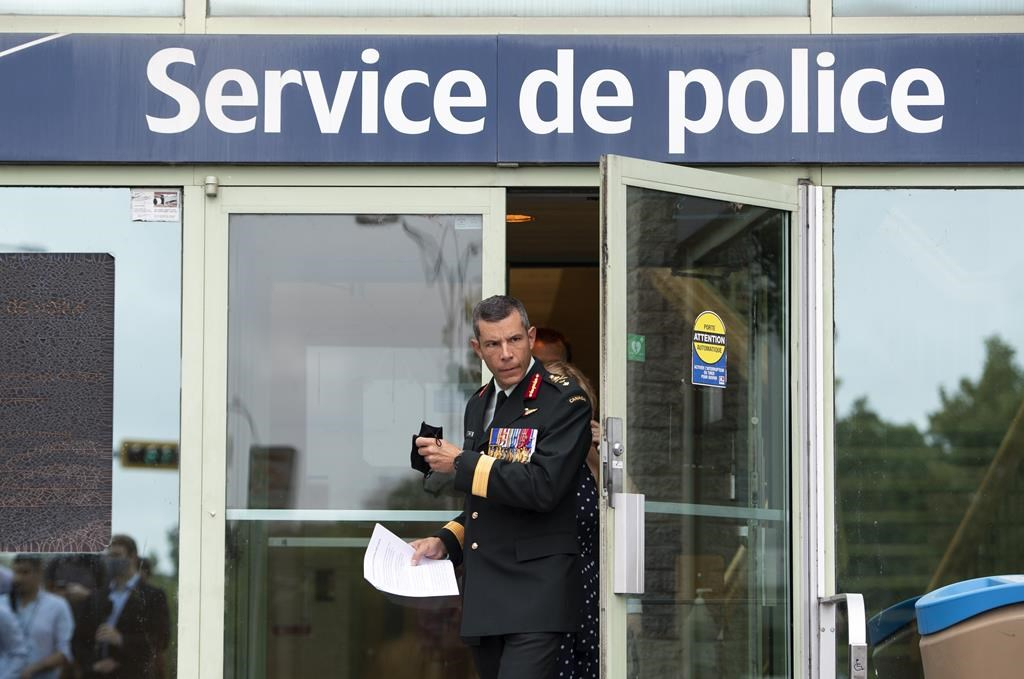 The military officer who led Canada's COVID-19 vaccine distribution campaign has been charged with one count of sexual assault.

Maj.-Gen. Dany Fortin presented himself to police in Gatineau, Que., Wednesday after a warrant for his arrest was issued Monday.

He later told reporters that he does not know the details of the allegation against him, despite repeated requests from his legal team.

"My legal team has repeatedly — repeatedly — contacted prosecutors to seek any information with no success. So I've been forced to read much about me in media, with no ability to defend my name."

Fortin's lawyers have said the only information provided to them is that the charge relates to an alleged incident from 1988.

The senior military officer, who has previously served in Afghanistan and Iraq, described the past three months as the most challenging period of his 36 years in uniform.

"This fight against an invisible foe has been the hardest of my career," he said. "I look forward to continuing to serve Canadians, to serve my country, as soon as this legal issue is resolved."

Fortin was abruptly removed from his post at the Public Health Agency of Canada on May 14 after leading the distribution of COVID-19 vaccines across the country.

The Canadian Forces National Investigation Service later referred an allegation of sexual misconduct against him to the Quebec prosecution service to determine whether charges should be laid.

Fortin has asked the Federal Court to review his removal, alleging in a sworn affidavit political interference by the Liberal government. He is asking for reinstatement to his position at PHAC, or a similar post.

Defence Department spokeswoman Jessica Lamirande said Wednesday that Fortin was given to a temporary position on Aug. 12.

"Maj.-Gen. Fortin was assigned temporarily to a supernumerary position as senior adviser to commander of Canadian Joint Operations Command in Ottawa," Lamirande said in an email.

"A determination on next steps will be made in due course. We will not provide further details at this time due to privacy considerations and that the matter is currently before the courts."

Fortin said he is paying his own legal costs for the criminal and Federal Court actions. His next court appearance is scheduled for Sept. 20, the same day that voters go to the polls.

Liberal Leader Justin Trudeau declined to comment on Fortin’s case during a campaign stop in Vancouver on Wednesday.

“But I will repeat how incredibly important it is that everyone who serves in the Canadian Armed Forces has an environment that is safe and supportive,” the prime minister said.

“We need to make sure that anyone who comes forward with allegations or with concerns is receiving the proper support, the proper resources. But at the same time that we work to transform the culture of our Canadian Armed Forces.”

One of Fortin's lawyers has raised questions about the timing of the decision to charge her client, which comes days after Liberal Leader Justin Trudeau launched an election.

The Liberals have been criticized for months for not doing more to address sexual misconduct in the Canadian military.

Fortin’s lawyers have argued in Federal Court that the decision to remove their client was unreasonable, lacked procedural fairness and involved improper political interference in the military chain of command by Trudeau, Health Minister Patty Hajdu, Defence Minister Harjit Sajjan and clerk of the Privy Council.

The government is required to respond to those allegations on Sept. 17, three days before election day.

“We’ll be looking at answering those questions and making sure this is not politically motivated and that it is above board. As Maj.-Gen. Fortin’s lawyers, we have a duty to ensure that there’s been no improper political interference in this case.”

In response, Sajjan's spokesman Daniel Minden on Wednesday said: "In Canada, decisions to lay criminal charges are made by independent prosecutors. We have no further comment as this matter is before the courts.”

Conservative Leader Erin O'Toole also declined to comment on the charge against Fortin because the issue is before the courts, but used the opportunity to once again criticize the Liberals' handling of sexual misconduct allegations in the military.

Fortin is the second senior military officer to be charged with a criminal offence in recent weeks after the CFNIS charged former defence chief Jonathan Vance with one count of obstruction of justice last month.

That followed an investigation into allegations Vance engaged in inappropriate sexual behaviour before and after he became chief of the defence staff in July 2015. He has denied any wrongdoing and not been charged in connection with those allegations.

The Liberal government is also in a standoff with Vance’s successor as defence chief, Admiral Art McDonald, who last week declared his intention to return to his position after a military police investigation into his conduct resulted in no charges.

The government responded by ordering McDonald to remain on administrative leave and promoting acting defence chief Gen. Wayne Eyre in a sign that it plans to keep the latter as commander of Canada’s military.

This report by The Canadian Press was first published Aug. 18, 2021.

— with files from Maan Alhmidi in Gatineau, Que.