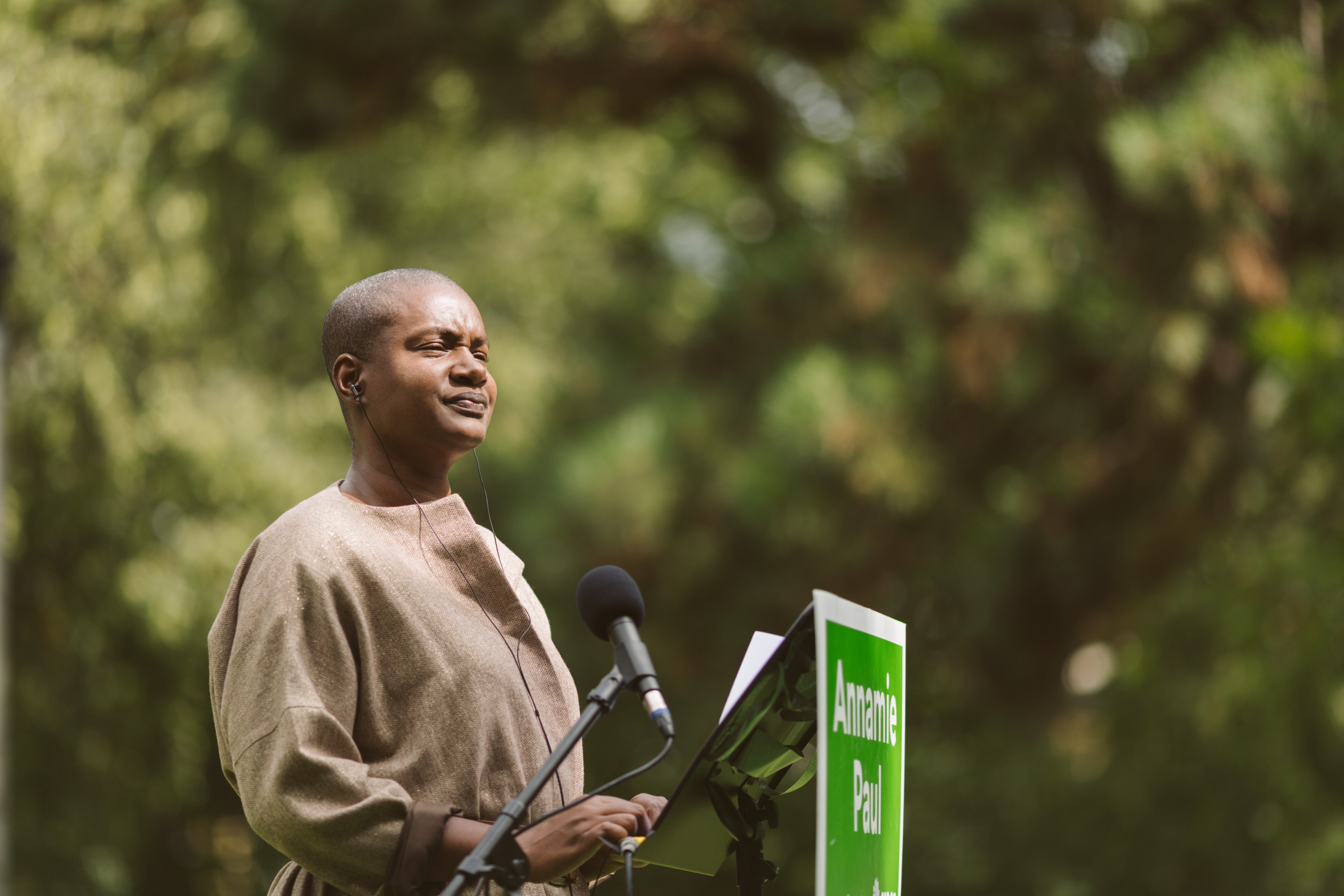 The plan Paul outlined Friday afternoon includes protecting the natural environment, increasing renewables and electrification, tackling industrial emissions, and investing in innovation, but she did not offer specific targets or measures on the plan to curb emissions quickly.

“We're focused this week on outlining the larger ideas, and we will be releasing more details about all of those elements, and more, later on,” Paul told Canada’s National Observer.

Paul added the party is “not doing a complete detour” from positions outlined in the past, like advocating for 60 per cent greenhouse gas emission reductions below 2005 levels by 2030, cancelling all new pipeline projects (including TMX), ending all oil exploration projects, and investing in building retrofits and electric vehicle charging infrastructure.

“We've never waited for an election to propose innovative ideas,” she said.

“So far, it seems like they're maybe not owning this moment in a way they could that would both help their party, and I think broadly be more of an effective conversation-mover on climate,” he said.

Fenton said that with the Conservative Party’s platform including a price on carbon, climate advocates should be using the moment to strike while the iron’s hot.

“We're no longer stuck in this climate debate about do we need a carbon tax or not … now we've got an opportunity to have a conversation about what are the 51 other things to close the gap on where we are on climate and where we need to be,” he said.

“Part of the Greens’ reason for existing as a party is to force that conversation to happen, and I didn't get that impression from the press conference today that they're taking that kind of responsibility as seriously as I would hope.”

If the Green Party wants to move the needle on climate change, it should "own the moment" with bold, specific ideas says @CamFenton of @350Canada. #cdnpoli #Elxn44 #Election2021

Fenton also said the Green Party has a unique opportunity to push the climate file forward because the NDP has “internal conflicts it’s constantly battling.”

The two major challenges, Fenton says, are that some of the party’s base comes from private sector unions who can be opposed to “keep it in the ground” climate messages, and the fossil fuel-friendly policies of two of the leading provincial NDP figures, B.C. Premier John Horgan and Alberta Opposition Leader Rachel Notley.

“Jagmeet Singh is always playing a bit of a dance with not being completely offside with leading provincial figures in the party,” Fenton said. “The Greens don't have that, so they have the opportunity to be out front and unapologetically push the window.

“But it does appear, and Annamie Paul has said this, (she) is trying to make the Green Party about more than just the environment and climate.”

Paul defends the decision, saying that in a pandemic, it wouldn’t be possible to only talk about climate change. Moreover, it’s important for Canadians to know the Green Party is responsive to other issues, she says.

Whatever the merits of the

Whatever the merits of the Greens, it seems a bit strange to me to think of anyone voting for a party that is in the process of imploding. Let them get their house in order, and then I might look at their platform.

It looks like the countdown to implosion has stopped. A new Federal Council is now in place. A key figure of the party's Fund has walked away. Even in the midst of the disastrous developments, Paul announced an impressive Shadow Cabinet and a further initiative to promote member-driven policy making. The Greens' proposals on all matters have been out for some time and Paul is sticking to that. Unfortunately, the only part most media have picked up about the Greens has been what was fed to them by the old gang. R.I.P, let's hope.

It seems that Cam Fenton

It seems that Cam Fenton (among others) does not understand how policy is developed within the Green Party of Canada (and Green parties in general). Unlike other parties, Green policies are not arbitrarily pulled out of the Leader's hat on the campaign trail based on polling and focus groups, and then announced and imposed top-down; they are developed by and from the grassroots. That's the way it has always been for the almost forty years of the GPC's existence.

The Green Party of Canada has an abundance of policies that have been developed and approved by the membership, on climate change and the environment in general, as well as on a wide range of industrial, agricultural, economic and social issues.

What the GPC does NOT have at the moment is an election platform that ties together a selection of those policies into a coherent whole which can be presented to voters. I'm sure that platform would have been developed by now but for the months-long feud over Ms. Paul's leadership, apparently primarily ignited and fuelled by outgoing members of the Party executive. I hope that Ms. Paul will now have a chance to do her job.