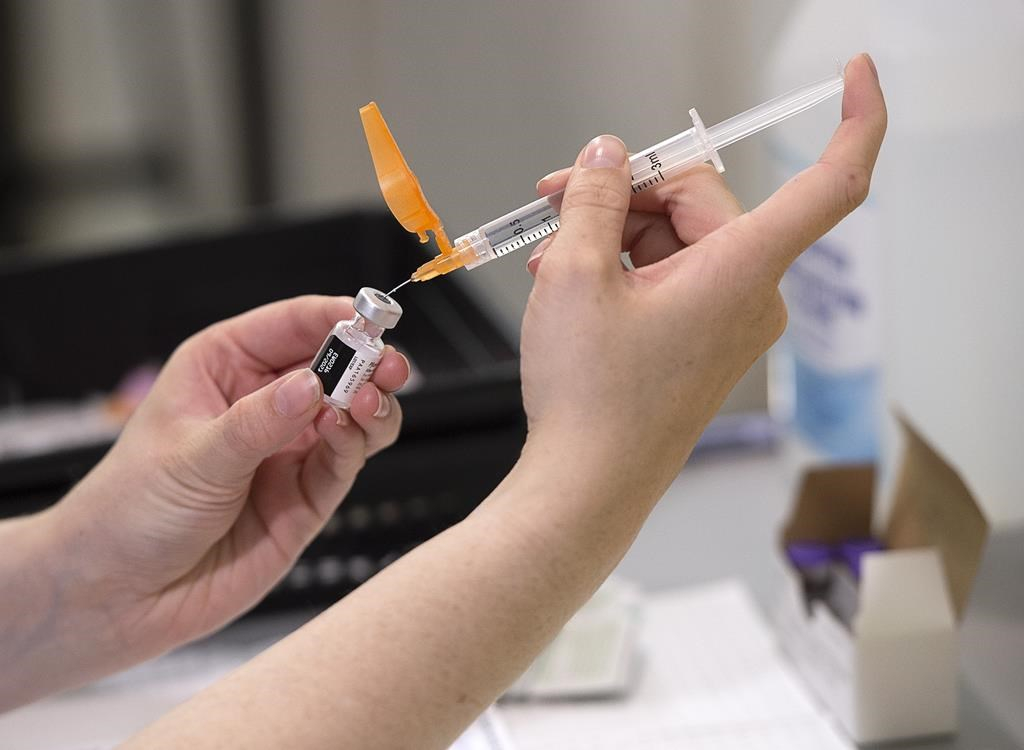 The Pfizer-BioNtech COVID-19 vaccine is prepared at a vaccination clinic in Dartmouth, N.S. on June 3, 2021. File photo by The Canadian Press/Andrew Vaughan
Previous story

A majority of Canadians support a system that would require proof of vaccination to access some non-essential services, a new poll suggests as the fourth wave of the COVID-19 pandemic takes hold.

Seventy-six per cent of respondents to the survey by Leger and the Association for Canadian Studies said they would strongly or somewhat support a vaccine passport like the one Quebec is implementing.

Quebecers are even more supportive of the measure, with 81 per cent saying they're in favour of the plan, which will apply in places like bars, concerts and festivals where there are lots of people in a confined space.

That's despite a weekend rally that drew thousands of protesters to the streets of downtown Montreal, calling for Premier Francois Legault to reverse his decision and hold a debate on the matter.

The questions around vaccine passports come as the poll suggests optimism over the pandemic is waning, said Andrew Enns, executive vice-president of Leger.

"I look at these numbers, and I get the feeling Canadians are starting to feel a little bit uncertain in terms of where the pandemic is heading," he said, pointing to tracking the Leger has done of people who believe the worst of the pandemic is over.

"That number has been dropping now for the better part of a month."

In the latest round of data, 44 per cent of people said they felt the worst of the pandemic had already past. That's down from a high of roughly 70 per cent in late June.

Enns attributed that to the spread of the Delta variant of COVID-19, which is fuelling the fourth wave of the pandemic.

Canada's top public health doctor has warned the newest wave is well underway, with nearly 20,800 active cases of the virus as of Thursday -- more than double what they were two weeks earlier.

Ninety per cent of COVID-19 diagnoses since the beginning of the vaccination campaign have been in people who were not fully vaccinated, according to data from the Public Health Agency of Canada.

Most Canadians in favour of vaccine passports for non-essential activities: poll #VaccinePassport #COVID19

Provincial data tracking shows nearly 83 per cent of Canadians have at least one dose of a COVID-19 vaccine, and almost 74 per cent are fully vaccinated.

The Leger survey also sheds some light on vaccination trends.

It found that 18 per cent of respondents who had received a dose of COVID-19 vaccine had taken doses from two different brands.

Of those, 58 per cent had one dose of the Oxford-AstraZeneca shot, and said they would be open to taking a third dose as a booster if scientific evidence suggests it will provide better protection.

Another seven per cent who had one dose of AstraZeneca said they would not take a third dose of vaccine.

The other 35 per cent of respondents who mixed doses had not taken AstraZeneca, so the question didn't apply to them.

Meanwhile, nine per cent of respondents to the Leger poll said they are unvaccinated and don't plan on taking the shot, while five per cent said they have not been vaccinated yet, but do ultimately plan on it.

The poll can't be assigned a margin of error because internet-based surveys are not considered random samples.

I disagree. Vaccine passports are not what a majority of canadians want. This is balloon news. Check out a local poll from castanet (Kelowna, BC) on this very same issue.