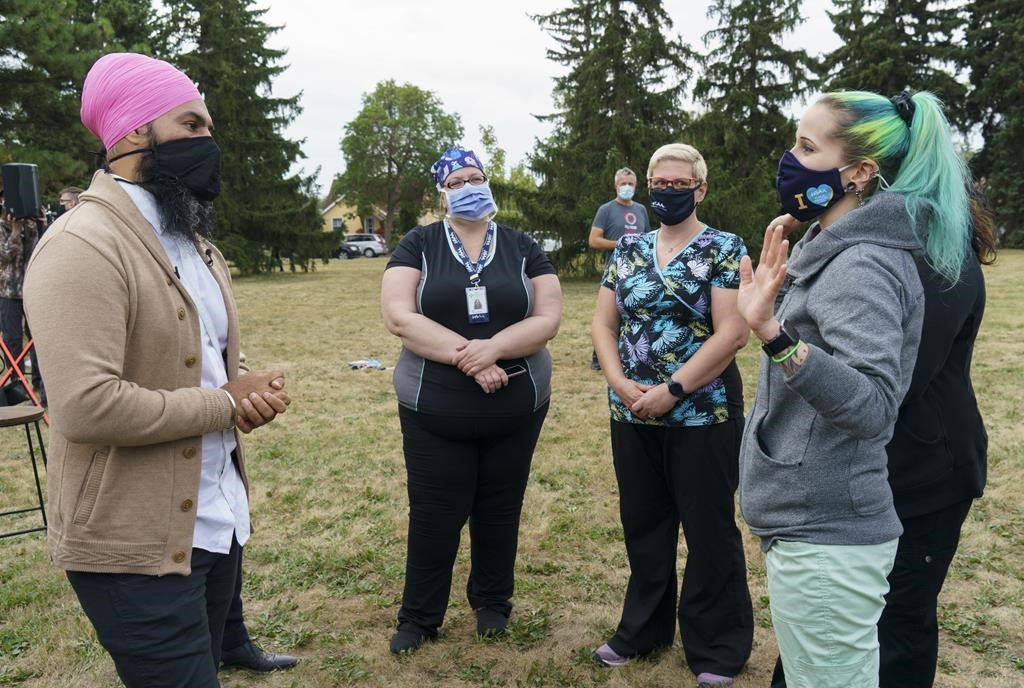 Singh made the campaign's first stop in an Indigenous community with a visit to the Cowessess First Nation in Saskatchewan, which announced in June a preliminary finding of 751 unmarked graves at the location of a former residential school.

“This genocide hits us hard,” Singh said after he visited the gravesites.

Late last month, Singh became the first federal leader to meet with Indigenous chiefs at the site of the former Kamloops Indian Residential School after the discovery of what are believed to be the remains of more than 200 children.

The leaders of the two largest parties were forced to address the future of reconciliation with First Nations as they campaigned in Winnipeg on Friday to make announcements on other subjects.

Liberal Leader Justin Trudeau reiterated his support for reconciliation as he kicked off the day with an announcement of new funding to support the safe return to work and school amid the COVID-19 pandemic.

He said Justice Minister David Lametti continues to work with Indigenous stakeholders “to look for consequences and to seek accountability in every possible way” for what has occurred at residential schools.

Trudeau stressed that work is being done by police and prosecutors who are independent of the political process.

Conservative Leader Erin O'Toole highlighted his own visit to Cowessess last month as he accused Trudeau of not acting decisively enough to pursue reconciliation.

Jagmeet Singh made the campaign's first stop in an Indigenous community with a visit to the Cowessess First Nation in Saskatchewan, which announced in June a preliminary finding of 751 unmarked graves at the site of a former residential school.

“With a Conservative government, we will have more than just words, we will have action,” said O'Toole, who was also in the Manitoba capital, where he was highlighting a promised hiring incentive in his party's platform.

“We will deliver what Mr. Trudeau promises but never delivers.”

Trudeau defended his government's record, saying, “What took generations, and in some cases, even centuries to break will take more than a few years to fix.”

He said more work needs to be done to ensure higher-quality education for Indigenous children, settling land claims, and moving forward on missing and murdered Indigenous women and girls.

“There have also been far too many continued tragedies and continued hardships. And that's what we continue to work on. It is not an easy journey towards reconciliation we are on, but is one that we are on strongly, firmly, resolutely,” said Trudeau.

Grand Chief Arlen Dumas of the Assembly of Manitoba Chiefs said it was a “good gesture,” but more resources would be needed to address the problem.

“We need to figure out how to expedite it,” said Dumas. “The issue of the discovery of these unmarked mass graves creates an opportunity for healing for all of us.”

Assembly of First Nations Regional Chief Cindy Woodhouse urged Canadians to learn more about the suffering of First Nations as they watch the federal election campaign and remain largely limited in what they can do during the COVID-19 pandemic.

Garrison Settee, the Manitoba Keewatinowi Okimakanak grand chief, said his message to voters is that the time has come for Indigenous people to catch up to the rest of Canada.

“It's time to bring our people to 2021,” said Settee. “This pandemic has exposed a lot of gaps in infrastructure and health facilities, and all kinds of systems that need to be revamped.”

Dumas said in an interview that he had a good, but brief, conversation with Trudeau about the First Nations-led response to COVID-19 in Manitoba and the continued work needed on water and housing issues on reserves.

The chiefs received an informal invite from the Liberals, but a spokesperson for the Assembly of Manitoba Chiefs said they did not receive one from the Conservatives. Dumas said he received a letter from O'Toole when he first became leader of the party, but there has been no further dialogue.

Dumas added he was particularly disappointed after a group of nine Conservative MPs wrote an open letter demanding two statues of British queens be quickly restored after they were toppled on Canada Day in Winnipeg in response to the unmarked graves being located at residential schools.

Dumas said it showed an unwillingness to listen to the concerns that led to the demonstration itself.

“The Conservatives continue to talk about us, but not talk with us.”

O'Toole said if he forms a government, it will work with Indigenous leaders to restore trust that he characterized as lacking.

“At the core of reconciliation is restoring trust between Indigenous people and the federal government. And when you make a promise with no plan to get there, you're eroding trust.”

— with files from Kelly Geraldine Malone