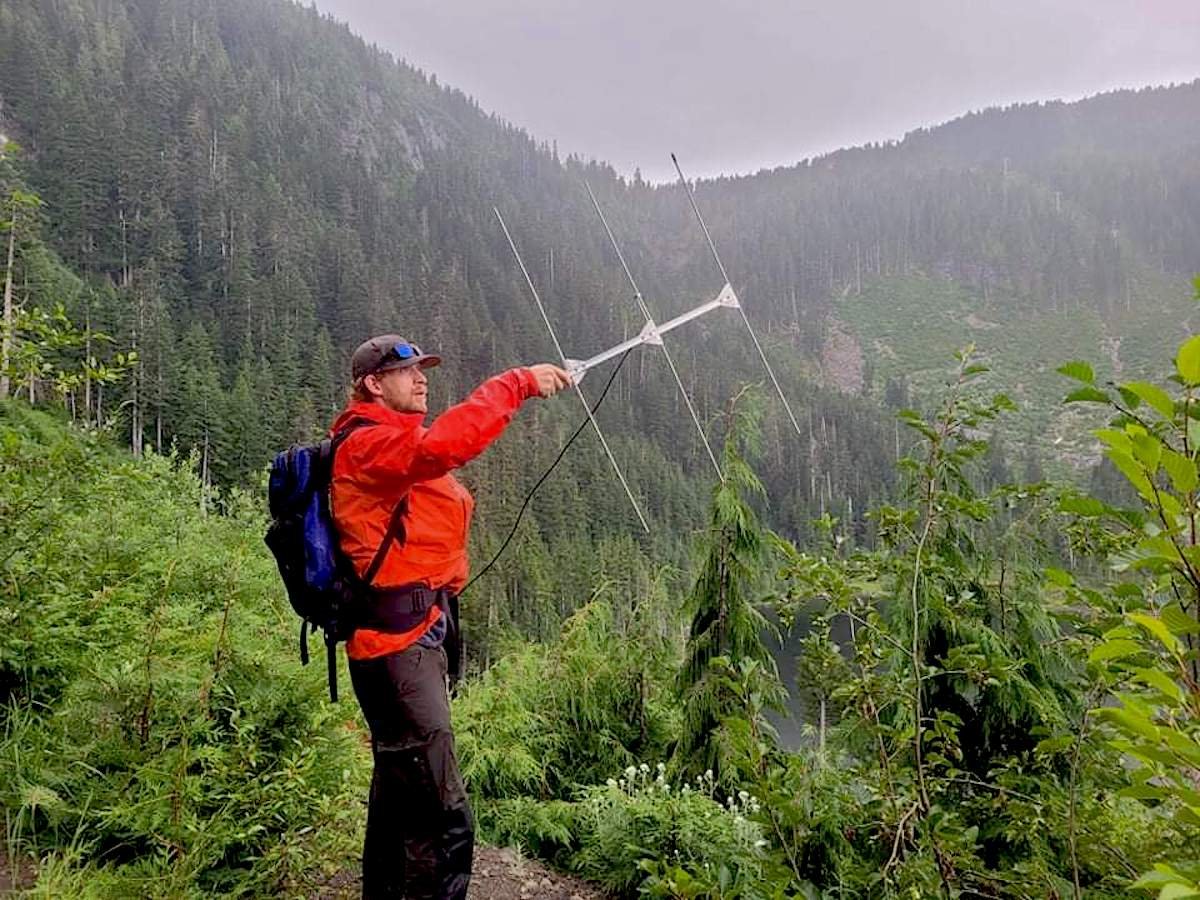 Kevin Gourlay and Chelsea Brager describe their job as “marmoteering.”

The two are part of a team of five field technicians who go to formidable lengths to find and monitor Canada’s most endangered, and possibly most endearing, rodent — the Vancouver Island marmot.

It’s a case of climb every mountain, ford every stream in the search for the shy, chocolatey-brown, cat-sized cousin of the squirrel — even if that involves hiking, biking, skiing, or scrambling along peaks while enduring cold, heat, or bugs.

“We’re kind of the boots on the ground for the recovery effort,” said Gourlay, who works with his peers for the Marmot Recovery Foundation to help monitor, release, rescue, and feed the highly endangered creatures.

Endemic to Canada and threatened with extinction, only 30 Vancouver Island marmots remained as recently as 2003 in a handful of locations — decimated by habitat loss spurred by climate change, and hungry wolves and cougars able to get to their colonies thanks to the roads built for industrial activity in the previously inaccessible alpine forests.

But a collaborative breeding and release program and conservation effort has boosted the wild population to approximately 200, and reintroduced marmots to areas where they had been completely wiped out. But their existence is still extremely tenuous, and every marmot counts.

But despite a cuddly demeanour, marmots live in remote, harsh conditions — usually higher than 1,000 metres among the peaks of Vancouver Island, Gourlay said.

“They’re an alpine species, he said. “So, basically, we have to get right up on top of the mountains to find them.”

Typically, that involves using a helicopter to access the most remote marmot colonies.

"It was an exhilarating rush," says Kevin Gourlay, a field technician with the Marmot Recovery Foundation, after discovering a new colony of the highly endangered species found only on Vancouver Island.

But the aircraft are scarce this summer, wrapped up in the battle against the wildfires tearing across the B.C. Interior.

So, Gourlay and Brager recently went on a backcountry journey — voluntarily, no less — that involved canoeing across a lake before hiking uphill for two days with 50 pounds of gear into the depths of Strathcona Park to check on a number of marmot colonies that hadn’t been surveyed for some time.

The effort resulted in a sweet reward.

On the last evening of their five-day excursion, Gourlay followed a hunch, explored a new area, and discovered a new marmot colony in a narrow gully.

“It was an exhilarating rush,” he said. “It was pretty comical with these little heads popping out of holes in the ground all over the place.”

Moments later, one whistled the alarm, and marmots scattered in every direction, making a full count impossible.

But the signs are positive that it’s a fairly established population with some adults, a yearling, and approximately seven or eight pups.

“They're absolutely adorable,” Gourlay said of the playful youngsters, which tend to be far more active than the adults that spend much of their time lounging on rocks the five months they are above ground after hibernation.

Finding a well-populated site in Strathcona Park is particularly significant because marmots were completely extirpated from the area and mortality rates in the region tend to be higher due to more extreme conditions, he said.

And the Strathcona Park find is in addition to two other colonies uncovered this summer, said Cheyney Jackson, the marmot foundation’s field co-ordinator.

Both were originally spotted by hikers, who relayed the information to the foundation. One was also in Strathcona Park, while the other was in the Nanaimo Lakes region, she said.

“It’s incredibly exciting for us,” said Jackson, who said the foundation went out to confirm the reports.

“With any endangered species, every positive sign is celebrated, because there are just so many challenges that you're working against.”

The overall marmot population has thankfully been stable over the past two years, but colonies are extremely vulnerable to predators and deaths during hibernation, she said.

But given there were no remaining colonies at all in Strathcona Park until the foundation did their first releases in 2007, it’s encouraging news, she added.

It’s too early to say what the population numbers will be for 2021 until all the surveys are done, but pup production seems to be strong this season, Jackson said.

She says it takes a particularly dedicated individual to be part of a crew that scours and slogs through the wilderness for the marmots’ sake.

“Not only to do it once but to do it, again and again, the next day for four consecutive months and keep smiling the whole time,” Jackson said.

“They are still curious when they hear that whistle … exploring and trying to figure out where it came from. That’s how these discoveries are made.”

Brager noted the work marries a passion for conservation biology with her love of the outdoors.

Regardless of any challenges, marmots, affectionately known as whistle pigs, are worth it, she said.

“It’s just an interesting animal to work with, and such a flagship species for conservation,” she said.

“They're so representative of the island itself, and the biodiversity that it hosts. It feels like you're really contributing to really good work.”

The mystery behind the hum of the hummingbird, unlocked

May I just say that this is

May I just say that this is the best (and most comical) example I've ever seen of someone trying to avoid blaming the real problem: clearcut logging (do I sense loggers in the family?): "Endemic to Canada and threatened with extinction, only 30 Vancouver Island marmots remained as recently as 2003 in a handful of locations — decimated by habitat loss spurred by climate change, and hungry wolves and cougars able to get to their colonies thanks to the roads built for industrial activity in the previously inaccessible alpine forests."