Liberals face questions about overspending and Afghanistan on the campaign trail 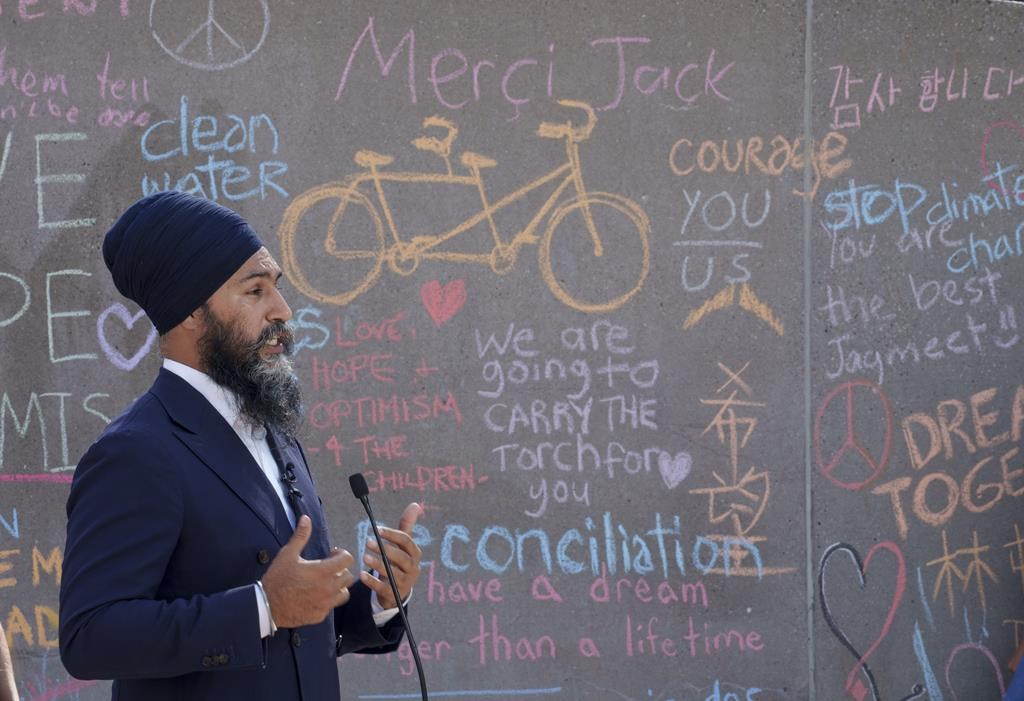 NDP Leader Jagmeet Singh responds to questions in front of a Jack Layton memorial wall in Toronto on Sunday, August 22, 2021. Photo by The Canadian Press/Paul Chiasson
Previous story
Next story

Accusations of wanton spending, misleading the public and prioritizing votes over the crisis in Afghanistan dominated the seventh full day of the federal election campaign.

NDP Leader Jagmeet Singh began Sunday in Toronto at an event honouring the tenth anniversary of Jack Layton's death. Layton led the NDP for eight years and the party soared to historic heights under his guidance, winning 103 seats in the 2011 election.

Singh paid tribute to Layton and his legacy and then took aim at Liberal Leader Justin Trudeau's response to the situation in Afghanistan. Choosing his words carefully, Singh said he wondered if the timing of Trudeau's election call has inhibited Canada's ability to help its allies in a country thrown into chaos since it fell to the Taliban this month.

"Maybe the fact that Justin Trudeau called an election might have impacted his ability to plan for the evacuation of our allies in Afghanistan," he said. "And I'm worried about that, I'm thinking that maybe more could have been done."

Singh said he would have sped up evacuations and made the paperwork process simpler for Canadian allies wanting out of Afghanistan.

"The process that Justin Trudeau had put in place required people filling out an online form," he said. "It was complicated, it was bureaucratic. When we've got an imminent humanitarian crisis, that is not the way to respond."

As of Sunday morning, three flights had left the country since the Taliban takeover, carrying fleeing Afghans who once worked with Canadian forces in the war-torn country. Defence Minister Harjit Sajjan said during a news conference that Canada will work to evacuate people from Afghanistan "for as long as it is safe to do so."

Meanwhile, the Conservatives took a swipe at Liberal spending with a news release highlighting the purchase of a $40,228 car for Bernadette Jordan, minister of fisheries, oceans and the coast guard.

The Conservative press release also pointed to about $218,000 spent on furniture for the ministerial office since Feb. 1, 2019. Jordan was sworn in as minister in November that year.

The Liberals said the Conservatives were misleading the public. Jordan didn't have a car when she became fisheries minister, so one was bought for her use, said Liberal spokesperson Brook Simpson.

"As the Conservatives are aware, all cabinet ministers and the leader of the official Opposition, regardless of the party in power, have access to a vehicle to carry out the work of their offices," Simpson wrote.

Further, the office expenses were incurred during a renovation that began prior to Jordan being sworn in as minister, Simpson said.

Pointing to a CBC News story from September 2020 that highlights $170,000 worth of taxpayer-funded renovations to Stornoway, the leader of the Opposition's official residence in Ottawa — and hence O'Toole's home since August 2020 — Simpson asked: "If the Conservative position is that renovation expenses should be repaid, will O’Toole pay back the $170,000 for his taxpayer-funded residence renovations?"

At an addiction recovery centre in New Westminster, B.C., O'Toole said he would approach Canada's opioid epidemic as an "urgent health crisis" rather than a criminal scourge.

The Tory campaign platform proposes investing $325 million over the next three years to create 1,000 residential drug treatment beds and build 50 recovery centres across the country.

"People with addiction should not be the focus of the criminal justice system," O'Toole said.

Trudeau was on the East Coast, trying to shore up support in a region the Liberals swept in 2015 but where they experienced setbacks two years ago.

Trudeau said Sunday he was "very optimistic" about his party's chances in Atlantic Canada, but he faced questions about why voters in the region should back the Liberals and exactly what the party is offering as a "big idea."

This report by The Canadian Press was first published Aug. 22, 2021.