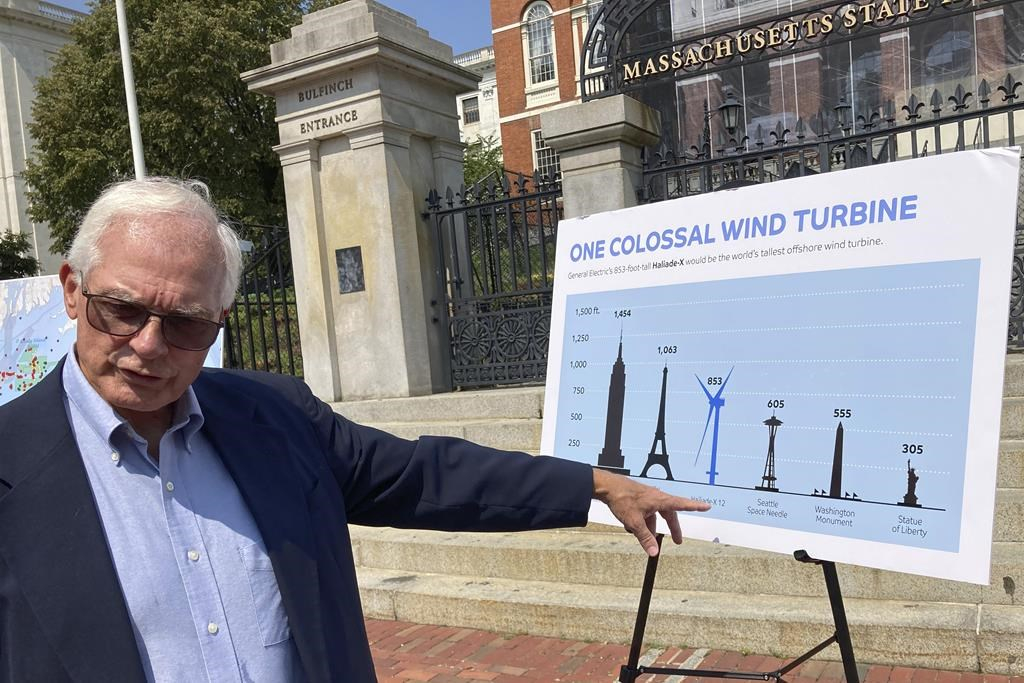 A group from the island of Nantucket filed a federal lawsuit Wednesday to block the construction of a huge offshore wind farm. File photo by Michael Dwyer / The Associated Press
Previous story

BOSTON (AP) — The construction of dozens of wind turbines off the coast of Nantucket threatens the survival of a dwindling number of endangered Northern Atlantic right whales that inhabit the waters, a group of residents on the affluent resort island in Massachusetts argue in a federal lawsuit filed Wednesday.

ACK Residents Against Turbines said Vineyard Wind’s proposed project of some 60 turbines 22 kilometres south of the island is in a crucial area for foraging and nursing for the species, which researchers estimate number less than 400.

Mary Chalke, a Nantucket resident and member of the opposition group, said the lawsuit isn’t just about Vineyard Wind, but other turbine projects also in the pipeline up and down the Eastern Seaboard.

“We all want renewable energy,” she said after the group filed the suit in Boston federal court. “This represents the transformation and industrialization of a pristine natural environment.”

The U.S. Bureau of Ocean Energy Management and the National Oceanic and Atmospheric Administration, which are named in the suit, declined to comment, citing the pending litigation. Vineyard Wind, a joint project of a Danish company and a U.S. subsidiary of the Spanish energy giant, Iberdrola, also declined to comment.

Vallorie Oliver, another Nantucket resident and group member, argues federal officials haven’t provided adequate research to back up their claims that the wind project will have minimal impact on the right whales and other marine life.

“We're simply asking for real science-based answers to the impact on our natural environment,” she said, speaking with other group members in front of the Massachusetts Statehouse.

Approved in May, the nearly US$3-billion, 800-megawatt project would be the first utility-scale wind power development in federal waters. It’s slated to become operational in 2023 and create enough electricity to power 400,000 homes.

The project and Ocean Wind, a proposed 1,100-megawatt offshore wind project off New Jersey, are keystones in the Biden administration’s push to grow offshore wind as a way to fight climate change and create jobs.

The projects could be joined by as many as five other large-scale projects totalling more than 2,000 turbines across 5,180 square kilometres of ocean, according to ACK Residents Against Turbines.

Approved in May, the nearly US$3-billion, 800-megawatt project would be the first utility-scale wind power development in American waters. #OffshoreWind #RightWhales #Lawsuit #WindFarms

The Nantucket group, whose name references the three-letter code for the island's airport, is the latest effort opposed to large-scale wind projects.

Fishermen who ply the lucrative waters from New Bedford, Mass., to Montauk, N.Y., have long worried about the potential impacts to their livelihood.

Bob Vanasse, who heads the fishing advocacy group Saving Seafood, said wind farms proposed in the region could impact scalloping, an industry that makes New Bedford the highest-valued port in the country.

“There are a number of groups in various fisheries who have raised concerns about the insufficiency of the planning and review effort,” he said Wednesday. “This group is far from alone in that.”

Supporters of Vineyard Wind have said the newer project is better sited than Cape Wind, which was proposed closer to shore.

He argued that Vineyard Wind’s project should be placed as far as 48 kilometres from shore.

“Fifteen miles was not OK in North Carolina or Long Island, then why is it OK for Nantucket?” Stevenson said. “It’s just wrong.”