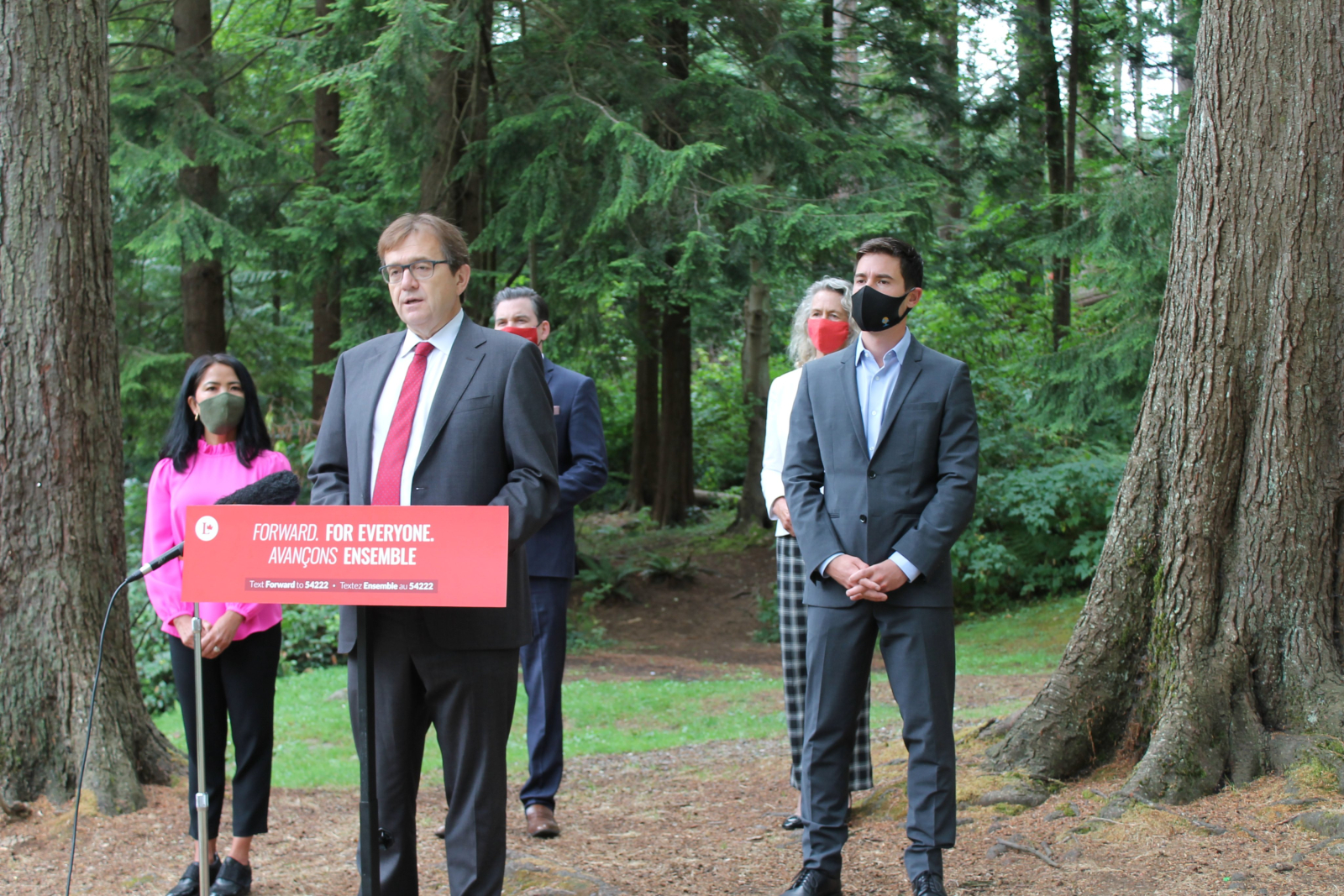 As activists opposed to old-growth logging were dragged and pepper-sprayed by the RCMP in Fairy Creek over the weekend, the Liberal Party promised to protect old-growth forests in British Columbia.

North Vancouver candidate Jonathan Wilkinson promised a re-elected Liberal government would put $50 million on the table to help protect old-growth forests, and took a shot at the NDP for not mentioning “old-growth” specifically in its climate plans, saying he was “disappointed” in NDP Leader Jagmeet Singh as a British Columbian. Wilkinson also said the Liberals would work toward an agreement with B.C. Premier John Horgan’s NDP government to expand protected areas.

“In many areas, the focus really is on stopping the decline of biodiversity, and that means looking to protect intact ecosystems to start with,” Wilkinson told Canada’s National Observer.

“While forestry management and the harvesting of timber in the province is the purview of the provincial government, our view is that there is a role for the federal government (in) working with the province and Indigenous communities,” Wilkinson said.

Wilkinson was reluctant to say the federal government was looking to insert itself into the province’s domain but did acknowledge Ottawa has jurisdiction over species at risk it could use.

“We're not trying to tell the province of British Columbia what it must do, but we are trying to say we're a willing partner to work with you on something that we know is important for British Columbians,” he said.

The Green Party’s Nanaimo-Ladysmith candidate Paul Manly said it was “about time” the Liberals listened to him and pointed to a motion he introduced in the House of Commons in February calling for the protection of old-growth forests.

“These land defenders aren't going to stop. They're not going to stop even with this brutality that we're seeing from the RCMP. They are determined to protect these forests, and these forests are key for climate change,” he added.

Manly said that when Canada signs international agreements, like the Convention on Biological Diversity, that is a commitment that should be upheld by the federal government. Instead, he pointed to an inconsistency.

As activists opposed to #OldGrowth logging were dragged and pepper-sprayed by the RCMP in #FairyCreek over the weekend, the #LiberalParty promised to protect old-growth forests in British Columbia. #Elxn44 #cdnpoli

But the jurisdictional landscape is changing in the wake of the Supreme Court’s decision earlier this year that ruled the federal government has a right to impose a carbon tax, essentially because responding to climate change is an issue of national concern.

“The federal government has a right to step in to protect biodiversity in the same way,” Manly said.

“How does (Ottawa) uphold our international agreements? Well they're going to have to take the provinces to task, and it may mean going to court over it to fight over jurisdiction,” he said. “But we are in a climate emergency ...This is the sixth mass extinction on the planet, so we need to do something about it.”

Climate group Stand.Earth international programs director Tzeporah Berman said in a statement she was encouraged by Wilkinson’s announcement, but it came after more than 700 people have been arrested by RCMP this year at the Ada’itsx (Fairy Creek) blockades.

“Old-growth forests are important to people all across Canada and are an essential part of any effective national climate plan. Yet even today, people are being arrested for trying to stop the clear-cut logging of some of the last of the province’s old-growth,” Berman said.

On Tuesday, the protests at Fairy Creek on Vancouver Island continued. Recently, the press has been denied access despite a court ruling calling the RCMP’s action unlawful.

On Monday, Singh committed $500 million to fund Indigenous-led land and water stewardship programs, including for old-growth forests. Other NDP candidates have signalled their support for old-growth forests as well, including Victoria candidate Laurel Collins and Cowichan-Malahat-Langford candidate Alistair MacGregor who have previously written to Wilkinson calling for federal support.

By Barry Saxifrage | News | May 7th 2021
Race Against Climate Change

Yup, as expected, they are

Yup, as expected, they are all coming out of the woodwork now that an election is here. The only party that has consistently showed up on the environment is the Green party. Here is an except of what to expect after an election.
."...As an example, at the recent NDP convention a motion to oppose new fossil fuel infrastructure was defeated after speakers told members not to cause problems for their BC and Alberta wings. Curiously opposing new fossil fuel infrastructure is in the election platform but they won't actually oppose new infrastructure like Woodfibre LNG, the proposed pipeline that will supply it or coastal gaslink as examples"

Can you cite your source,

Can you cite your source, please. I want very badly to read that, before I decide on my vote.
thnx

The Fairy Creek land defenders finally made the front page of the STAR today in their large focus piece!!! Haven't looked to see if The SUn of any iteration has written about the cause (that is a joke by the way)
Fair summary minus detailing the police brutality or the money spent on brutalizing citizens in the interest of corporations.
. Also heard the rcmp protected Trudeau from protesters outside his hotel in Vancouver, poor darling, can't stand to be told ,"do something more than hot air !!"
wow, does giving rcmp $20+ million to defend logging companies come under corporate subsidies or policing??? hmmmm
sure doesn't come under enforcing the government's much ballyhooed "rule of law" since the First Nations have asked rcmp to leave both Wet'suet'en and Fairy Creek nations and they haven't , nor have they respected the court ruling to allow access of journalists to their "protection" of citizens.
disgusting. thank you kids for knowing this is worth broken bones and sprains. I applaud the defenders and no doubt they really are terrified enough of their future to over ride being terrified of the rcmp.

Not to mention our Liberal

Not to mention our Liberal government and now BC’s provincial government are both going ahead with a pipeline that we pay millions into, site C, & building an LNG pipeline through First Nations land while fracking the best farmland in the north and using the RCMP to harass & bully those who say “stop”. GRRR Both these industries are about to be history, and I’m afraid so will our pristine BC coastline. The only party who sees the REAL picture are the greens. They don’t have much power now! Thank goodness we have two here in BC, & I have Elizabeth to vote for, otherwise I’d spoil my ballet. Remember, 2015, the last year of FPTP, HA!! proportional representation is GONE for good. YIKES! Cheerio from Salt Spring Island

All the stars in the heaven,

All the stars in the heaven, and all of us here on earth, should be thanking these protesters. And sending the movement financial contributions in support.

The NDP government in B.C. has proven itself traitor to what it said it stood for.

The bottom line here, is, as always, money triumphing over any sense of preservation of the natural world. Leave nothing for our kids, and grandkids, and further generations, except lots of little plastic gizmos that get chucked six months after purchase.

We have lost any sense of preserving for future generations. I don't know about the First Nations in B.C., but it looks at first glance like they've lost the Seven Generations ethic as well. That, to me, is the ultimate impact of colonialization.

Most of Canada has been yapping about this being the Green Election--the time when people's feet will move in the direction our mouths have been discussing, for decades.

Kudos, and enormous gratitude, to the people, young and old, at Fairy Creek. My generation failed abysmally, enticed by all the shiny toys of capitalism. I will go to my grave apologizing. I hope your generation(s) are more stalwart than we were.