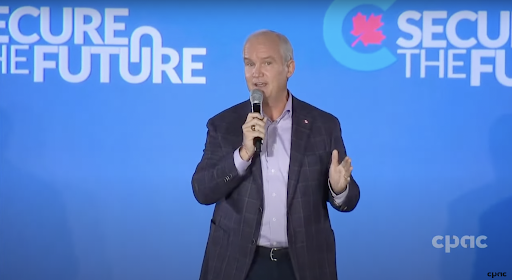 It didn’t take Conservative Leader Erin O’Toole very long in this election campaign to raise the spectre of his rivals thwarting an imagined Tory victory by conspiring to “govern Canada as a coalition.”

It came on Day 3 of the 36-day writ period. And we can likely expect much more of it in the coming weeks.

At a Conservative rally last Tuesday in the Toronto suburb of Richmond Hill, O’Toole said: “Friends, 12 years ago, the Liberals, the NDP and the Bloc Québécois signed a pact to govern Canada as a coalition. Today, with the addition of the Green Party, that’s precisely what we have. There isn’t a choice between the Liberals, the NDP, and the Greens. They’re all the same.”

(A quick reminder about O’Toole’s reference, which actually dates to 13 years ago: After a minority Conservative win in the 2008 federal election, and unanimous opposition rejection of the Tories’ fiscal plan that fall, the Liberals under Stéphane Dion and the NDP under Jack Layton made plans to bring down Stephen Harper’s government with parliamentary support from Gilles Duceppe’s Bloc Québécois. The plan fell apart after the Conservatives controversially prorogued Parliament, Michael Ignatieff replaced Dion to become interim Liberal leader, and Harper agreed to changes in the Conservative government’s fiscal plan.)

O’Toole is not entirely delusional. A narrow Conservative win in the Sept. 20 vote could well see some combination of the other parties pool their seat totals, construct a formal coalition or legislative accord, and win approval from Gov. Gen. Mary Simon to form a government with majority control of the House of Commons.

But it’s O’Toole’s inference — in keeping with previous Conservative messaging about coalitions in recent federal elections — that such an arrangement would be diabolical, disastrous, and anti-democratic that needs to be refuted. Coalitions, legislative accords, and other kinds of co-operative, multi-party governing arrangements are relatively common in Canadian political history, they’ve often been successful, and they’re entirely legitimate.

In fact, Confederation itself wouldn’t have happened without the “Great Coalition” formed in 1864 between Reform leader George Brown, Liberal-Conservative leader John A. Macdonald, and Parti Bleu leader George-Étienne Cartier.

“The Great Coalition was a turning point in Canadian history,” notes no less an authority than The Canadian Encyclopedia. “It proved remarkably successful in breaking the logjam of central Canadian politics and in helping to create a new country.”

The Liberal-NDP legislative accord struck in Ontario in 1985 is the other oft-cited example of a successful coalition-like government in Canada. British Columbia’s 2017 NDP-Green governing alliance is a more recent example.

And, of course, all minority provincial and federal governments — including those run by Harper, and the Liberal one in which Justin Trudeau maintained power, largely with NDP support, for nearly two years before this election — have necessarily relied on multi-party co-operation to advance a legislative agenda.

We should be used to history-blind Conservative fear-mongering on this front by now, writes @randyboswell for @NatObserver. #Elxn44 #Election2021

This is how, in certain circumstances, parliamentary democracy works in Canada. It may be a nightmare scenario for O’Toole and other contemporary Conservatives, but it’s a sweet dream to many Canadians who prefer collaborative governing arrangements over the sweeping power of a “false majority” — when a single party controls the House of Commons despite securing far less than 50 per cent of the popular vote in a federal election.

We should be used to history-blind Conservative fear-mongering on this front by now. Pot shots against coalitions have been part of the party’s arsenal since the early years of Harper’s prime ministership. During the 2019 election campaign, Tory leader Andrew Scheer followed Harper’s lead in falsely claiming it would be constitutionally illegitimate for a “Trudeau-NDP coalition” to attempt to govern Canada if the Conservatives won the most seats but fell short of a majority.

So we should all be able to recognize and dismiss the self-serving disinformation about Canada’s political system that’s routinely peddled by Conservative leaders every time we go to the polls.

And that includes O’Toole’s casual, insidious characterization last week of the country’s other federal parties as some kind of secret, leftist cabal — “... they’re all part of the problem ... they love spending your hard-earned money just as much as Justin Trudeau does ...” — that is always plotting to subvert democracy and rob the Conservative Party of its rightful claim to power.

Might some combination of the Liberals, NDP, Greens and/or Bloc co-operate to govern Canada in a post-election world? Yes, because they have many broadly overlapping policies — their members agree wholeheartedly, for example, that climate change is real and that face-masking and vaccination are how we beat COVID-19 — and because the Conservatives are positioned largely alone on the centre-right side of Canada’s political spectrum.

O’Toole’s attempt in his Richmond Hill speech to depict the Conservatives as the only party capable of saving Canada’s post-pandemic economy and guiding the nation’s future, and his lumping together of the Liberals and the other parties as a menace to responsible governing — “… the NDP and the Greens have helped Justin Trudeau cover up his scandals…” — was summed up by one National Post columnist as a warning from the Conservative leader “of the terrible threat of a Liberal/NDP/Bloc/Green coalition.”

But it’s only “terrible” and a “threat” from a Conservative perspective.

We can probably expect more overheated, partisan rhetoric as we move closer to Sept. 20, especially if the race between the Liberals and Conservatives tightens — as the latest polls, though still early in the campaign, suggest is happening — and it looks like no party will win the 170 seats necessary for a majority in the 338-seat House of Commons.

The Conservatives, perhaps with a popular vote nationally of about 35 per cent, would get the chance to govern. But even with Bloc support — hardly a natural alliance for the Tories — they would fall short of the 170 seats needed to control the House for a significant stretch of time.

However, a Liberal-NDP-Green legislative accord — perhaps built around some common goals on climate change, child care, pharmacare, long-term care, affordable housing, Indigenous reconciliation, vaccination mandates, extended pandemic relief, post-pandemic economic policies, and more — could constitute a viable agenda backed by a parliamentary majority of 171 seats and underpinned by a pooled popular vote, nationwide, of something close to 60 per cent.

Add Bloc Québécois support for many measures — not a huge stretch of the imagination — and the multi-party government’s working majority would be considerably stronger.

We’ve all been trained by Canada’s first-past-the-post electoral system to see politics as a winner-take-all game, and it remains one of Trudeau’s great failures that he didn’t blow up that system as promised in the 2015 election campaign.

In recent decades, though, it’s mostly been in the Conservatives’ interest to promote the winner-take-all way of thinking and to demonize their opponents for legitimate acts of co-operation or imagined collusion to deny democracy.

But during the 1990s, when Liberals under Jean Chrétien ruled supreme and Tory fortunes were divided between the rival Reform and Progressive Conservative parties, Harper himself was publicly promoting scenarios in which “a coalition or working alliance” of second-, third-, and fourth-place parties might eventually wrest control of Parliament from Chrétien’s Liberals.

“I think parties that want to form a government are eventually going to have to learn to work together,” Harper said in 1997, describing the kind of working alliance he would hypocritically, illogically, and opportunistically reject a decade later as a “reckless coalition of losers.”

(Harper, it should be remembered, also negotiated a tentative agreement with Duceppe and Layton in 2004 to form a possible Conservative-led coalition government in the event that Paul Martin’s Liberal minority fell early in its mandate. O’Toole may wish to add a reference to that bit of political history to his stump speech.)

We’re still a long way from Sept. 20. Perhaps Trudeau will win the majority he set out to achieve when calling this election, perhaps he’ll merely hold his current minority, or maybe O’Toole’s Conservatives will take the most seats.

But exactly how Canada’s next government will be formed — and which party or parties will control Parliament — won’t necessarily be resolved the minute the votes are counted. And Harper’s words (the ones that made sense, that is, back in the ’90s) might prove prescient.

Deception seems to be an A

Deception seems to be an A list, go-to option for the conservatives these days. Unfortunately, the plan seems to be to deceive their own people, too.

He's a kind of Kenney Lite,

He's a kind of Kenney Lite, pretending to be elsewhat. There are some issue positions that mark ballots in the US, but would be electoral suicide in Canada, abortion rights among them.
I'm trying, though, to remember an election I could vote in, in which which party leaders kept the promises that made people vote for them, and I'm hard-pressed to do so.
I, personally, would appreciate more truth-telling, less mud-slinging, and a cessation of lying claims about opponents. Not because it's not nice, but because democracy deteriorates even further when that lies block the view of truth.

Right on the mark, thank you.

Right on the mark, thank you. Justin Trudeau should be held to a minority, and then he should gain wisdom and w-o-r-k with the opposition parties to get things done. These past two years he only tolerated them, and did not shy from bully tactics, all the while longing to have his majority back so he could do whatever he wants unhindered. He may not have enough wisdom to pull this off, however.

In his first press conference coming out of Rideau Hall on August 15, he was asked by several reporters: If you don't get your majority, will you resign? That would be the best outcome of all. I wish he would be asked that more often.