Movies on race and horror, the world’s most valuable painting, and illusions about dad 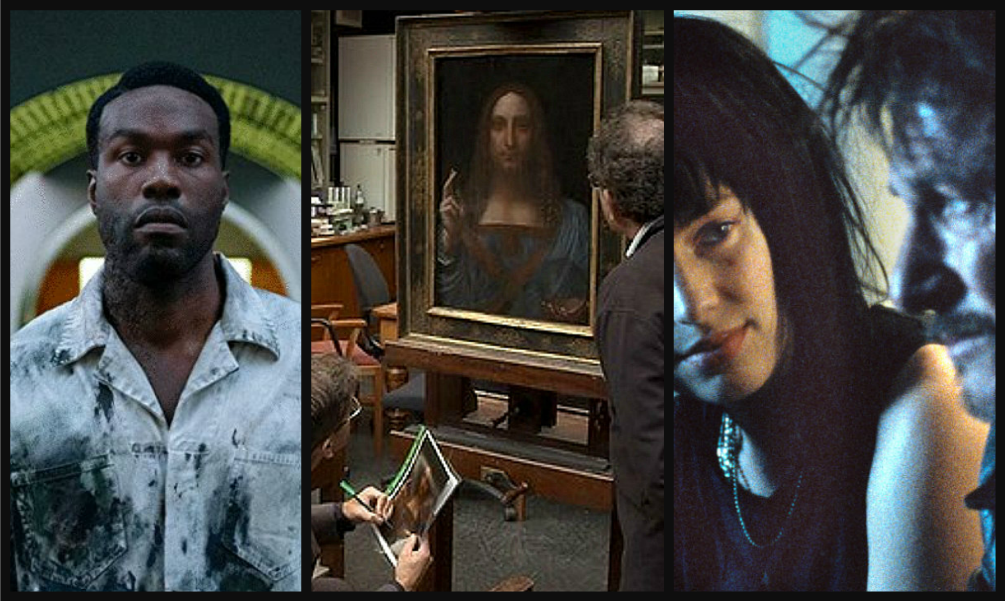 Also: a marriage crisis, old country traumas, and what you didn't know about trees.
Previous story

There's a short festival of Latin American films now on at the Cinematheque. You can go to www.vlaff.org see what's on. The festival includes two films looking back at notorious events, two about Indigenous people, two about fun-loving boys, and a classic. Viridiana is the Luis Bunuel film from 1961 that's considered his masterpiece. It won at Cannes, but was denounced by the Vatican.

One I wish was included is 499, a Mexican film that takes a novel look at colonialism. It now could be called 500, because that's how long ago Cortez defeated the Aztecs. The anniversary was marked in Mexico, but not celebrated, just a couple of weeks ago. The film is playing in one theatre in Toronto. I'll say more when it goes wider.

Meanwhile, we have these ...

The Hidden Life of Trees: 4

They Who Surround Us: 3

CANDYMAN: Quite often now, filmmakers use horror movies to explore tough problems in society. Think back to Get Out, which Jordan Peele created to explore race relations in the U.S. He's done it again, going deeper and more direct this time, to show how discrimination perpetuates. He co-wrote the script, which elaborates on a 30-year-old cult film that had that theme in the background but was a slasher film upfront. You still get blood and killings, sure, but they're artfully rendered by director Nia DaCosta, and come with lots to think about.

Yahya Abdul-Mateen II (he played Bobby Seale in The Trial of the Chicago 7) is an artist in Chicago, living where the notorious housing project Cabrini Green used to be. It's torn down, the area is now gentrified, with some people blaming the artists who moved in for cheap rent, and Black people blaming white people. He creates an art project out of it, bringing in the urban legend of Candyman, who died at the hands of white racists and wants revenge. Reviving the story revives him. You don't have to know the original to get this, though there are references back to it, and Vanessa Williams and Tony Todd repeat their roles. Just see this as a modern metaphor about race relations, police, and Black lives, a bit murky in its deeper explanations, but still provocative. (Scotiabank, Marine Gateway, and many suburban theatres.) 3½ out of 5

TILL DEATH: Just as large and eternal a dispute plays out in this horror film. Toxic marriage is the issue and is starkly presented as a contest between a controlling, self-obsessed man (Eoin Macken), a lawyer wouldn't you know, and a resilient woman, his wife (Megan Fox). So strong-willed is she that she's started an affair with his business partner. She pays for it, though, when he suggests they spend their anniversary at a house at the lake they used to enjoy visiting. Right now, it's a snowy winter, so you know something's not right.

It shows up right after some uncomfortable sex. He handcuffs her to himself and shoots himself in the head. Ludicrous, yes, but look what it leads to. She has to drag his body around through most of the rest of the film. Up to the attic. Down to the basement. Through the snow, out to a shed. She's looking for any tool that can cut the handcuffs off. He's hidden everything. He's also hired two guys to arrive and deal with her. Still handcuffed, she has to fight back. Fox carries this film with her grit and spunk, crawling through the snow again, and even underwater when the ice on the lake breaks. It's crazy, metaphorical if you want to stretch it, but also gripping under the sleek direction of S.K. Dale. (Stream from Amazon, Google Play, and others.) 2½ out of 5

FLAG DAY: Sean Penn directs himself, his daughter Dylan, and also a son in a small role in this true story about family revelations and a charismatic father with big faults. It's a bit like The Glass Castle, which also delved effectively into a real family's dysfunction. Here, the daughter idolizes the father, who talks big about joy and ambition. Mom says he's nothing but a liar; he denies that, claims he has prospects, and that guy who looks like a thug who comes around is a “business colleague.” It takes a while for the daughter to see through him, some of it while visiting him in prison.

Jennifer Vogel is her name. She's a journalist who told this story in a book called Flim-Flam Man. He was that mostly as a counterfeiter, and the bulk of the film is about her learning that and admitting her conceptions about him were all wrong. In other words, finding her identity apart from him. So the film shifts a lot, back in time, from incident to incident, but it remains restrained. It's not the blowout you might expect. There are fine economical sequences, like when he's buying her a Jaguar, but she sees the phone isn't even plugged in. The film culminates on a June day when Americans commemorate the official adoption of their flag. The film chooses to stage a major tragedy on that day and breaks the generally subtle tone with it. Still, good acting from father and daughter, as father and daughter, carries this one well. (Park Theatre.) 2½ out of 5

THE HIDDEN LIFE OF TREES: This is a must-see for a number of reasons. Trees help us in many ways, including resisting climate change. In B.C., we get daily reports about the protests at Fairy Creek, and we've heard about other logging protests for years. Also, there are amazing facts about trees this film reveals. They're already in the bestselling book the film is based on, but have a real impact visually. And vocally in the talk throughout by the author, Peter Wohlleben, the former forester from Germany.

He reveals that trees talk to each other and help each other out. They share water, alert about approaching insects, and emit chemicals that keep them away. They can live to a very old age; one he visits is said to be 10,000 years old. But more than point out these novelties, he advocates for real forests allowed to grow wild and is against clear-cutting. Replanting creates a plantation, not a forest, he says. Clear-cutting also takes out the small trees, which would become the giant trees if they were allowed to stand. The film takes him to Vancouver Island where he meets Chief Steven Dick and hears his plans to return to living off the land, and he meets David Suzuki who says environmentalists aren't against logging, just bad logging. Longtime debates are zippy and compact in this film. (Rio Theatre.) 4 out of 5

THE LOST LEONARDO: It's the world's most valuable painting, established as that when it sold for $450 million at auction. The story behind it is fascinating and this documentary in telling it reveals a great deal about the business of high-value art. There's even a second film coming soon on the same story, so compelling it is. The painting, officially known as Salvator Mundi, may have been painted by Leonardo da Vinci, or maybe just partially and finished by his studio assistants. It was unknown until it showed up at a small auction house in New Orleans (sold for $1,175) and then made the rounds.

Experts, restorers, and academics examined it. One, Dianne Modestini, removed some “overpaint” and fixed some damage, and goes into detail why she thinks it is genuine. A detail on the lip, for instance, is similar to one on the Mona Lisa. Shady collectors and dealers get involved and the value explodes repeatedly. The Crown Prince in Saudi Arabia now owns it. How he got it and his plans for it are a story, too. Director Andreas Koefoed keeps you riveted telling “the most improbable story in the art world.” And exposing a few secrets. (International Village.) 4 out of 5

THEY WHO SURROUND US: This is true Canadiana. A farmer in Alberta is assailed by traumatic memories from his former life in Ukraine. They're from 1943 when he and his mother were escaping from soldiers (Russians, it seems) who were chasing them. She tells him to run, and he never sees her again. There's also a baby, which mom sends floating away on a pond. Those scenes flash back to him, briefly or substantially, throughout the film.

They're particularly set off by a tragedy. His wife dies; there's a funeral and noises like a train horn bring the memories back. Some involve soldiers searching houses and firing shots. In Alberta, there are exact parallels for him over small matters, like when a cop sees him driving through a stop sign and then asks if he's been drinking. He imagines the shooting he saw as a boy happening again on his farm. It's a hard-edged depiction of trauma, the effect it has on his own son, others around him, and the rural community he lives in. It's a very personal story, it seems, for Troy Ruptash, who stars, wrote it, and directed it in Vegreville, where he was born and grew up, and has done a lot of acting on American TV shows. It's deliberately paced, but you sense that he knows these people and these stories. (International Village.) 3 out of 5