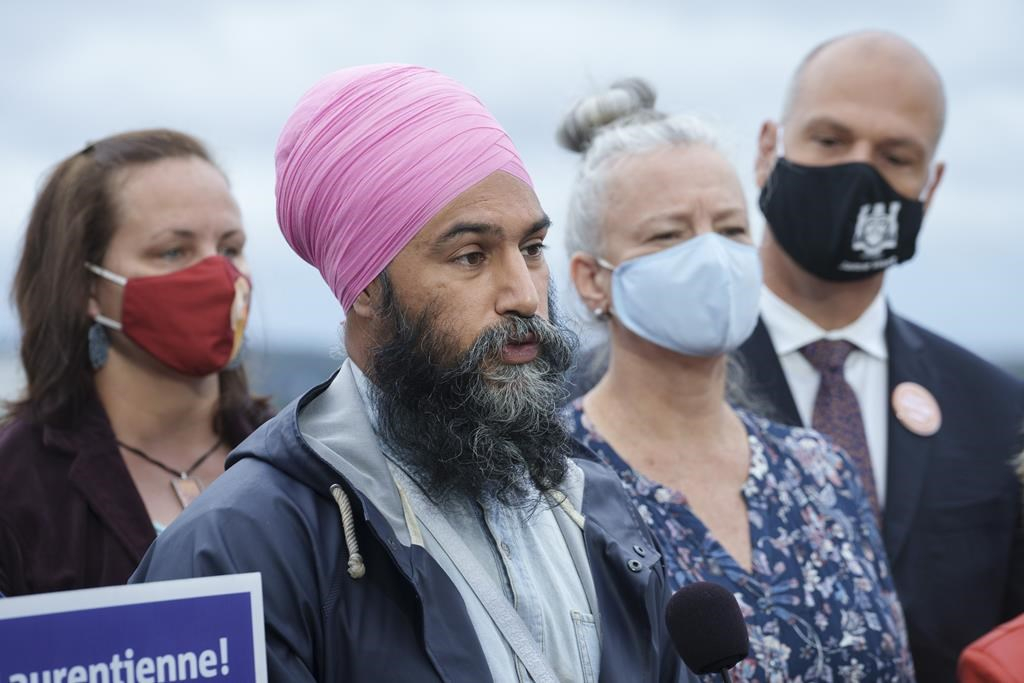 NDP Leader Jagmeet Singh responds to a question surrounded by students, professors and candidates at the University of Sudbury, in Sudbury, Ont., on Saturday, Aug. 28, 2021. File photo by The Canadian Press/Paul Chiasson
Previous story
Next story

An angry crowd of agitators surrounded Justin Trudeau's campaign buses and screamed profanity at the Liberal Leader during a campaign event in Cambridge, Ont., Sunday.

The event was delayed more than hour as the throng of people blocked the entrance to the local sheet metal business where Trudeau made the first big climate announcement of his re-election effort.

It also comes two days after a Trudeau rally in Bolton, Ont., was cancelled over security concerns from another angry crowd.

Trudeau says he understands that the pandemic has increased the fear and anxiety in many, but condemned any threats or use of violence, racism and bigotry.

He says people who deny science around vaccines and climate change are not the ones who are going to dictate how Canada moves forward, and the events of this campaign are deepening his resolve to push forward with his platform.

But he was at times difficult to hear over the crowd, which repeatedly chanted expletive-filled slogans aimed at the Liberal leader and carried signs at least one of which included a photo of Trudeau about to be executed by hanging.

"I do think we need to understand that people have had a tough year, that the world is changing rapidly, that there is fear, there is anxiety out there," Trudeau said.

"But let me be also very, very clear, I am absolutely resolute in my conviction to continue to move Canada forward. And that's the choice people get to make in this election."

One of the crowd members hurled a racist slur at a Black officer in Trudeau's security detail and a misogynist insult at a female officer. Others were heard shouting death threats.

Police physically carried one woman off the private property when she refused to move back.

Trudeau's campaign has been faltering thus far, with polls suggesting the significant lead the Liberals held earlier this year has evaporated. His campaign has been dogged by protesters at multiple stops, but the mob mentality and size of the crowds appear to have increased in recent days.

Some of the agitators have appeared at multiple events. One man showed up at a Trudeau event in Hamilton, Ont., and then the next day at one in Surrey, B.C. He told reporters he was "maybe" being paid to follow Trudeau around.

Conservative Leader Erin O'Toole and NDP Leader Jagmeet Singh have both condemned the angry crowds and called on people to be respectful. O'Toole also said four Conservative campaign volunteers who showed up in the crowd at the Bolton rally have been told they're no longer welcome to campaign with the Tories.

Their events were both far calmer than the Liberals' tour stop Sunday.

O'Toole was in Saint-Hyacinthe, Que., where he promised new measures to help support small businesses trying to rebuild after the COVID-19 pandemic. The promises include a 25 per cent tax cut for individuals who invest up to $100,000 of their own money in a small business, and interest-free loans of up to $200,000 for small and mid-sized businesses from the government.

Singh was also in Quebec taking questions with Ruth Ellen Brosseau, a former NDP MP who announced Friday she is seeking to take back her seat in Berthier — Maskinongé, northeast of Montreal.

Trudeau's climate promise included plans to regulate total emissions cuts in the oil and gas sector for the first time, with a view to getting to net-zero by 2050, and setting new regulations that will require half of all cars sold in Canada to be zero-emission by 2030, and 100 per cent by 2035.

This report by The Canadian Press was first published Aug. 29, 2021.

Afghanistan, pandemic are casting a shadow over the Liberal campaign

Trudeau has certainly raised the ire of the "angry crowd" but he is, in so many ways, the author of his own problem. Every time I read/hear him say "move (fill in the blank) forward" I cringe. I have harbored the same opinion for a long time that he is long on promising but very, very short on action other than throwing money at problems which seems to never be a good solution. The recent appearance at the Fairy Creek protest (old growth forest) in B.C. is a prime example. The Minister of the Environment finally shows up and immediately throws (promises) 50 million dollars to protect Old Growth Forests. How exactly does that help save Fairy Creek?