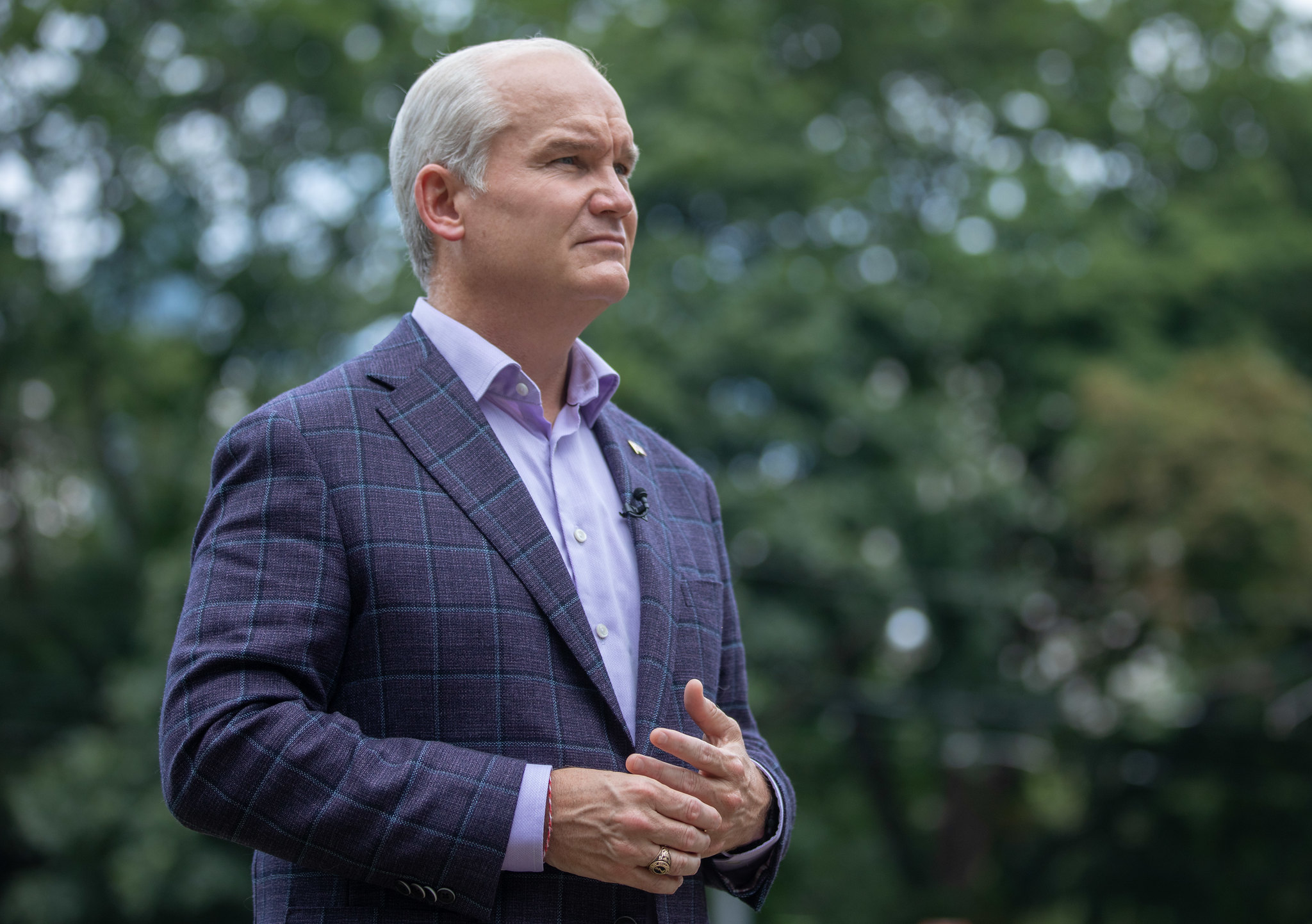 In 2011, Erin O’Toole’s climate plan might have passed muster. But in 2021, it’s a blueprint for going backwards, writes columnist Max Fawcett. Photo by Deb Ransom via Erin O'Toole / Flickr
Previous story
Next story

The now-defunct Northern Gateway pipeline project is both a monument to the failed Harper-era policy of petro-nationalism and a testament to the power of Indigenous communities and those fighting for their rights. It’s emblematic of a past when concerns about climate change were far less important to the government of Canada than the interests of Alberta’s oil and gas sector. And for some strange reason, Erin O’Toole wants to bring it back from the dead.

This would be a fatal blow to any hope Canada has of reaching its net-zero emissions targets by 2050. Under the scenario the International Energy Agency laid out earlier this year, “There are no new oil and gas fields approved for development in our pathway, and no new coal mines or mine extensions are required.”

There’s certainly no need, then, for a new pipeline capable of moving more than half a million barrels per day — especially when Canada already has more than enough capacity to move its existing production to markets. When pressed by the Globe and Mail to explain how he squares the circle between his support for a new oil pipeline and his promise to help Canada meet its emissions reduction targets, O’Toole declined to answer the question.

This contradiction is at the heart of the climate plan O’Toole is trying to sell to Canadians. Yes, it includes carbon pricing, but it tops out at $50 per tonne — far below the levels needed to actually drive meaningful emissions reductions. And while he has pledged to meet Canada’s commitments under the Paris Agreement, he only means the ones made in 2015, not 2021. Rather than reducing Canada’s greenhouse gas emissions by 40 to 45 per cent from 2005 levels, as the federal government already announced earlier this year, O’Toole plans to backpedal to the 30 per cent target from 2015.

Given that Canada’s current policies already have us tracking towards a 36 per cent reduction, according to the Parliamentary Budget Office, O’Toole’s plan represents a deliberate step backwards for Canada. As Polaris Strategy’s Dan Woynillowicz noted on Twitter, O’Toole’s options would be limited to violating the Paris Agreement — a legally binding treaty — or, like Donald Trump, beginning the process of withdrawing Canada from it.

In 2011, O’Toole’s climate plan might have passed muster. But in 2021, it’s a blueprint for going backwards at the very moment the rest of the world is pressing ahead on climate change. Yes, it’s better than what Andrew Scheer tried to fob off on Canadians in 2019, but that’s the textbook definition of damning with faint praise. And while it claims to believe in the importance of reducing emissions, its preferred and proposed methods for doing that raise some major red flags.

After all, while it accepts carbon pricing in theory, the actual practice it proposes is so absurd that it practically borders on a Monty Python sketch. Canadians will be credited for the carbon they burn, which doesn’t sound like a great way to get them to burn less of it. As the Globe and Mail’s Andrew Coyne wrote, “Rather than simply admit they were wrong, the Tories have twisted the idea into something unrecognizable, indeed one might have thought impossible: a carbon tax that does not reduce carbon consumption.”

It gets more absurd, though. The credits O’Toole’s Conservatives are proposing would go into a “personal low carbon savings account,” and would only be available for use on government-approved green products. This would create an enormous new layer of bureaucracy and government oversight, and it’s a curious idea coming from a party that likes to talk about the dangers of regulation and red tape. If O’Toole doesn’t end up as prime minister, Cirque du Soleil may want to consider employing him as a contortionist.

We are well past the point where we can delude ourselves into thinking we can have our cake and eat it, too, on climate change. Things like expanding the oil and gas industry and rewarding people for burning more carbon are fundamentally at odds with reducing greenhouse gas emissions and meeting our actual climate targets. If Conservatives actually want to be taken seriously on this issue, it’s long past time they stopped pretending otherwise.

As Coyne wrote, “The Conservatives don’t want a plan that works, still less one they might actually have to implement. They just want a plan they can wave around for a while, then discard.” If Canadian voters genuinely care about climate change, they’ll do themselves a favour and put O’Toole’s plan in the trash can — before he gets a chance to do it himself.

When I look at the four main

When I look at the four main parties climate plans in detail the only one that has always been consistent and is the only one that packs a wallop in reducing GHG emissions is the Greens. What is so ironic is that for some unexplainable reason their plan gets the lowest support in the election polls. Where are the thoughtful people taking these polls? Can't they see that accepting anything less effective than the Green plan is a death sentence for every other issue under consideration, My question is very simple. How can our species survive without an immediate and rapid reduction of GHG emissions?

Conservative's climate denying, pipeline planting actions are an insult to caring Canadian's intelligence. I will not vote for an early death. At this point, those actions would bring serious political division to the population. Addressing this critical issue is no longer a political issue anyway. Crimes against the planet should, and will be punishable by law, which does not absolve conservative right wing nonsense.
David R Derbowka (Davi Derbowka)