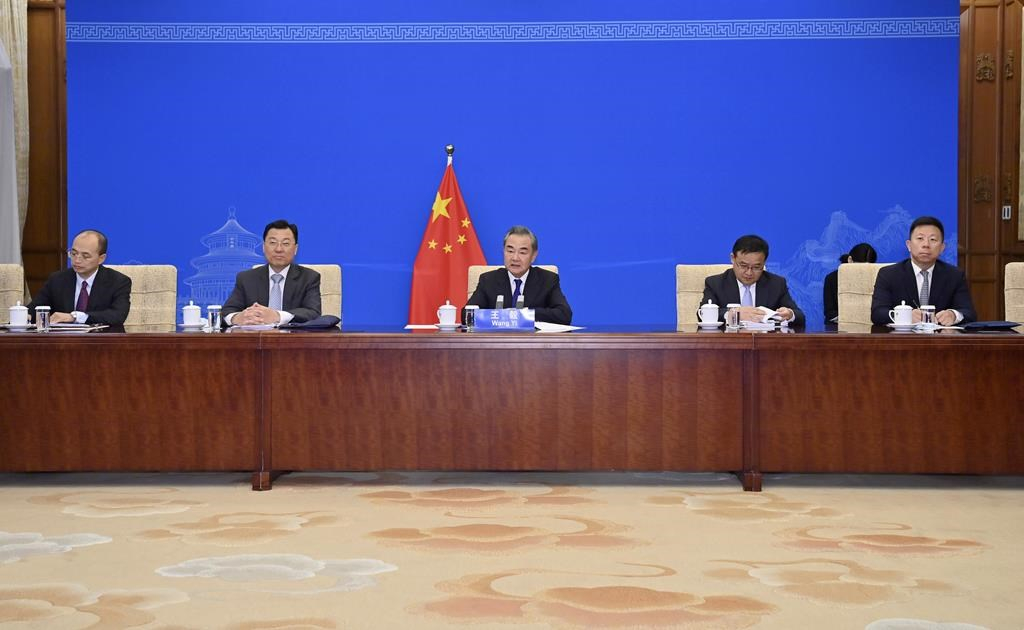 Wang told Kerry by video link that such cooperation cannot be separated from the broader relationship and called on the U.S. to take steps to improve ties, a Foreign Ministry statement said.

Kerry, who is in the Chinese city of Tianjin for climate talks with his Chinese counterparts, said the U.S. is committed to cooperating with the rest of the world on climate and encouraged China to take additional steps to reduce emissions, the U.S. State Department said.

Kerry, a former secretary of state, also said that China “plays a super-critical role” in the effort to combat climate change, according to a brief video clip from the meeting shown on CGTN, the international arm of state broadcaster CCTV.

China is the world's largest emitter of greenhouse gases, followed by the United States.

Relations between Washington and Beijing have been strained by disputes over trade, technology and human rights. But the sides have identified the climate crisis as an area for possible cooperation.

“China and the U.S. have differences on some issues. In the meantime, we share common interests in a range of areas such as climate change," Chinese Foreign Ministry spokesperson Wang Wenbin said at a daily briefing Wednesday.

“Both sides should maintain dialogue and communication on the basis of mutual respect and carry out mutually beneficial cooperation," Wang said.

The world’s biggest coal user, China obtains roughly 60% of its power from coal and is the world’s biggest source of greenhouse gases. It plans to build more coal-fired power plants but still plans to taper its use of the fossil fuel.

Beijing has pointed to historical U.S. emissions as a reason to resist action while making advances in solar power and other renewable energy sources. China has set a target of generating 20% of the country’s total energy consumption from renewables by 2025, becoming carbon-neutral by 2060 and reducing total emissions starting from 2030.

President Joe Biden has announced a goal to cut up to 52% of U.S. greenhouse gas emissions by 2030 — double the target set by President Barack Obama in the 2015 Paris climate accord. The 2030 goal vaults the U.S. into the top tier of countries on climate ambition.

Kerry has called for stronger efforts to to curb rising temperatures to no more than 1.5 degrees Celsius over pre-industrial levels. He urged China to join the U.S. in urgently cutting carbon emissions.

Kerry made a stop in Japan on Tuesday to discuss climate issues with Japanese officials before heading to China.

Global decarbonizing efforts will come under the spotlight at a U.N. conference to be held in Glasgow, Scotland, in late November, known as COP26.

China's goal is to have carbon emissions peak by 2030

G20 environment ministers meet to prepare for COP26 in Nov.