Ontario to demand proof of vaccination in high-risk settings as of Sept. 22

By Holly McKenzie-Sutter | News, Politics | September 2nd 2021
#1438 of 1611 articles from the Special Report: Coronavirus in Canada 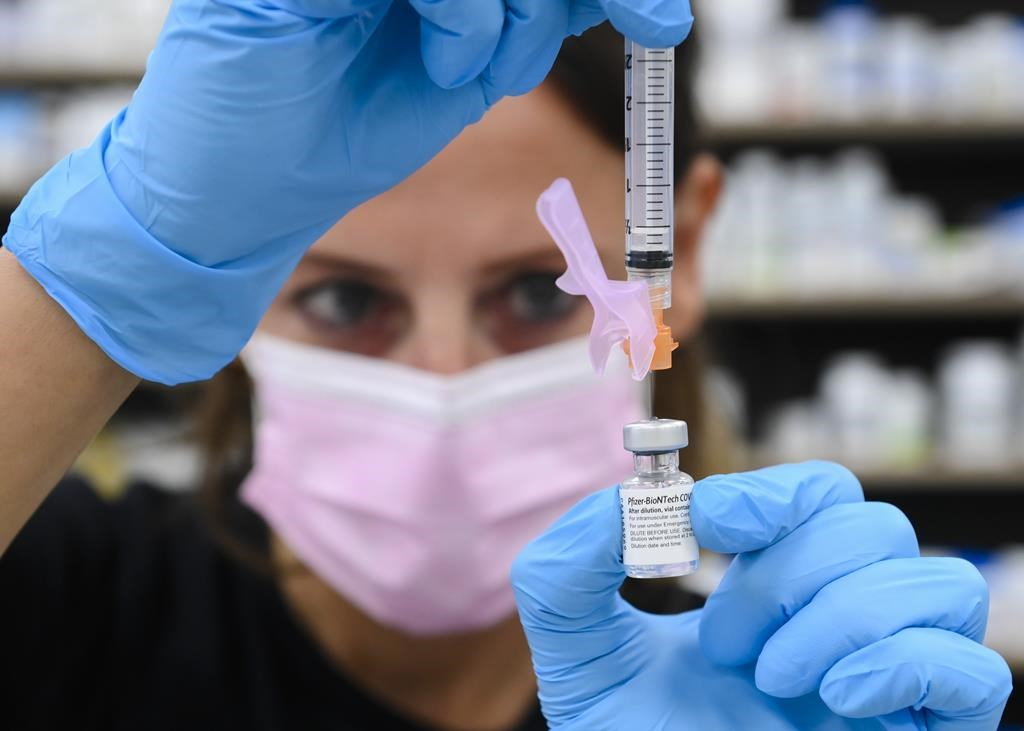 A pharmacist draws up a dose of the Pfizer-BioNTech COVID-19 vaccine, in Toronto, on Friday, June 18, 2021. File photo by The Canadian Press/Nathan Denette
Previous story
Next story

Giving in to mounting pressure from experts, businesses and political opponents, Premier Doug Ford announced a vaccine certificate system Wednesday that will see Ontarians showing proof of immunization to access public spaces such as restaurants, gyms and movie theatres.

But the new system – which takes effect Sept. 22 and won't be required for retail and services such as hair salons – came under criticism for not applying to venue staff and for taking too long to kick in.

Ford, who previously denounced vaccine certificates as creating a "split society," said he had changed his mind as the province experiences a fourth wave of infections.

"This is something that I did not want to do. This is a serious step that we're not taking lightly," the Progressive Conservative premier told reporters. "This is a temporary tool that we won’t use for a day longer than we have to."

Ford said the system was needed to protect the vulnerable and avoid another lockdown. He also said, however, that it was being brought in because the federal government had not yet introduced a national vaccine passport.

The federal Liberals, who are currently seeking re-election, have said the Canadian government is working on a vaccine passport for international travel.

The system won't apply to essential services like health care and grocery stores, or to children under 12 and those with select medical exemptions to COVID-19 vaccines.

Locations requiring proof of vaccination are largely those that involve close contact, crowds, and where people don't continuously wear masks.

There will be exceptions for weddings and funeral receptions until Oct. 12, but those attending will have to show a negative COVID-19 test result if they are unvaccinated.

The COVID-19 Science Advisory Table called for higher vaccination coverage, boosted by policies like vaccine mandates, and limits on in-person contacts to fight the fourth wave.

"To avoid a lockdown in the fall, vaccination needs to accelerate substantially above 85 per cent of eligible population … and we need to reduce contacts to about 70 per cent of pre-pandemic levels until vaccination is high enough," it wrote.

"It is critical that we continue to respond with assertive action to protect Ontarians," he said, adding that proof of vaccination might be required in more settings going forward.

The vaccination certificate requirement won't apply, however, to venue staff.

Moore said businesses can introduce their own staff vaccination policies and said they have other measures in place, like regular screening.

He also pointed to vaccination-or-testing policies already introduced in hospitals, schools and long-term care homes, noting that some workplaces have moved to mandate vaccines. He said the province might strengthen its policies later if necessary.

"We will move to mandatory if and when we are not achieving the goals that we have to protect patients, children and vulnerables in our community," he said.

The new system will be phased in.

At first, patrons will need to show a paper or digital receipt of vaccination issued by the province along with another form of government identification to gain access to spaces covered by the new rules.

On Oct. 22, the province aims to launch a QR code and verification app for businesses to streamline the process. Officials said the app is being developed with help from outside contractors, but wouldn't name those businesses.

Officials said some penalties such as fines would apply to individuals and businesses that don't comply with the new rules.

The province said it's working on alternatives for people who don't have smartphones or a health card, and also said it would work with Indigenous communities as it brings in the system.

NDP Leader Andrea Horwath said equitable access to the system shouldn't be an afterthought, and questioned the exemption of venue staff from the policy.

She also criticized the announcement as coming too late, without essential tools like the QR code ready to use, which she argued leaves businesses open to harassment when they have to enforce the rules.

"Mr. Ford is still leaving far too many businesses on their own to make tough decisions," Horwath said.

Liberal and Green party leaders also expressed concern about the timing of the policy's implementation.

Rocco Rossi, president of the Ontario Chamber of Commerce, said his group supports the vaccine certificate to help prevent another "devastating" lockdown for businesses and the economy. He also called for clear provincial guidance on employee vaccination policies.

The Canadian Federation of Independent Business said businesses have unanswered questions about the new policy including enforcement and training for businesses and protection against lawsuits. It also called for financial support to help businesses enforce the new rules.

More than 83 per cent of Ontario residents aged 12 and older had at least one dose of a COVID-19 vaccine as of Wednesday and more than 76 per cent had both doses.

This report by The Canadian Press was first published Sept. 1, 2021.

By The Canadian Press | News | August 23rd 2021
Coronavirus in Canada