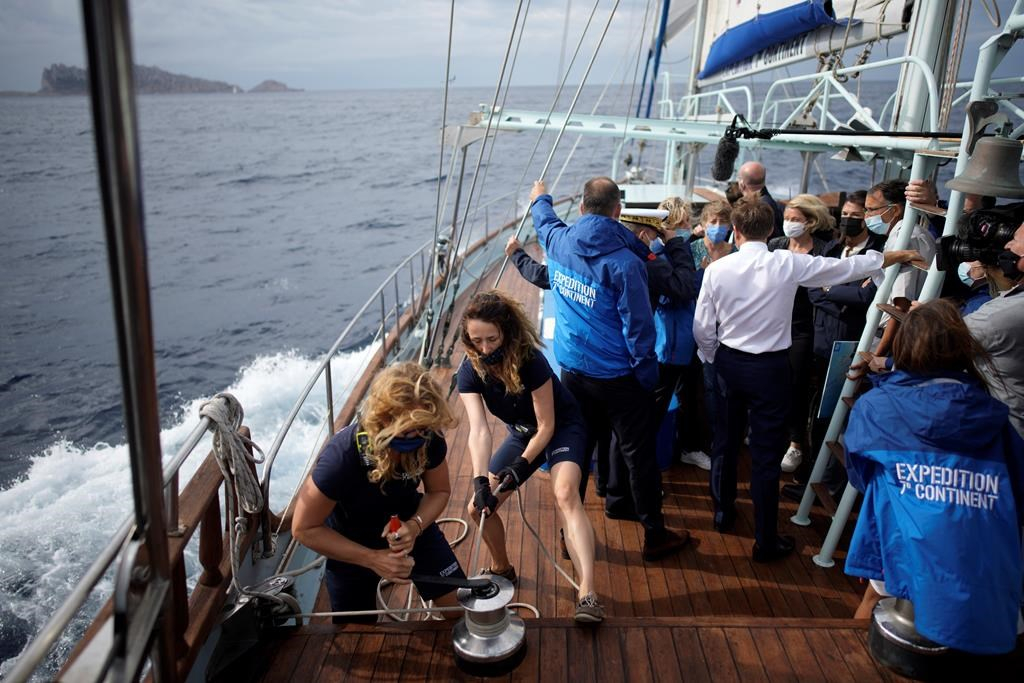 French President Emmanuel Macron is expected to urge world leaders and institutions to safeguard biodiversity as they work to curb climate change and support human welfare at a global summit starting Friday in southern France.

Macron will formally open the World Conservation Congress in the French southern city of Marseille, on the Mediterranean coast. Thousands of people are set to attend the event, both in person and virtually, amid the COVID-19 pandemic.

The conference, which is held every four years, focuses on urgent actions needed to protect wildlife. Several recent studies have reported that many of the planet's ecosystems are severely strained by global warming, over use and other threats.

Oceanic shark populations have dropped by 71% since 1970. More than half of all bird of prey species worldwide are declining in population - and 18 species are critically endangered. Warming temperatures and melting ice are projected to imperil 70% of Emperor penguin colonies by 2050, and 98% by 2100.

“Our common goal is to put nature at the top of international priorities, because our destinies are intrinsically related - planet, climate, nature and human communities,” Macron wrote in a statement ahead of the event.

On Friday morning, Macron and some other conference participants, including European Council President Charles Michel, took a boat to Calanques National Park, a marine reserve near Marseille known for its azure blue waters topped by high white cliffs.

The reserve is home to dolphins, fin whales, turtles, sea urchins and a variety of fish. Its coastal area also includes 1,600 plant species and 25 protected bird species. Measures to preserve the area were first taken in 1923 and reinforced in 2012.

Macron plans to use the visit to address the importance of better protecting the Mediterranean Sea, and oceans in general, from pollution and overfishing, his office said.

The French leader then is heading to the conference, which is hosted by the International Union for the Conservation of Nature. IUCN is made up of 1,400 private and government entities and non-governmental organizations.

A French top official, speaking anonymously in accordance with the presidency’s customary practices, said Macron would convey a message about the “environmental emergency” unfolding at the local, national and global levels.

“Our ecosystems and their protection are an essential solution to face the challenge of climate change...Lots of examples show that biodiversity helps with absorbing greenhouse gas," the official said. "On the contrary, we know that climate change is a major factor in biodiversity loss.”

Macron notably wants to follow the path started at the One Planet Summit in January, which has led 70 countries to commit to protecting at least 30% of the world’s land and oceans over the next decade to halt species extinctions and to combat climate change.

The conference, which runs until Sept. 11, will bring together hundreds of groups focused on international conservation issues to set strategies and priorities for safeguarding species and natural resources.

Topics of the conference include the potential expansion of the world’s network of protected areas, the links between climate change and biodiversity loss, and the ethics of using genetic enhancement to increase species chances for survival in a fast-changing world.

U.S. weather officials recently reported that July 2021 was the hottest month in 142 years of record-keeping. A U.N. report released in June examined ways in which climate change was exacerbating the loss of biodiversity.

Talks at the Marseille conference are also meant to inform the U.N.’s global climate summit, the COP26, scheduled in November in Glasgow, Scotland.