Is Justin Trudeau flubbing the West Coast vote by failing to push hard on climate change? 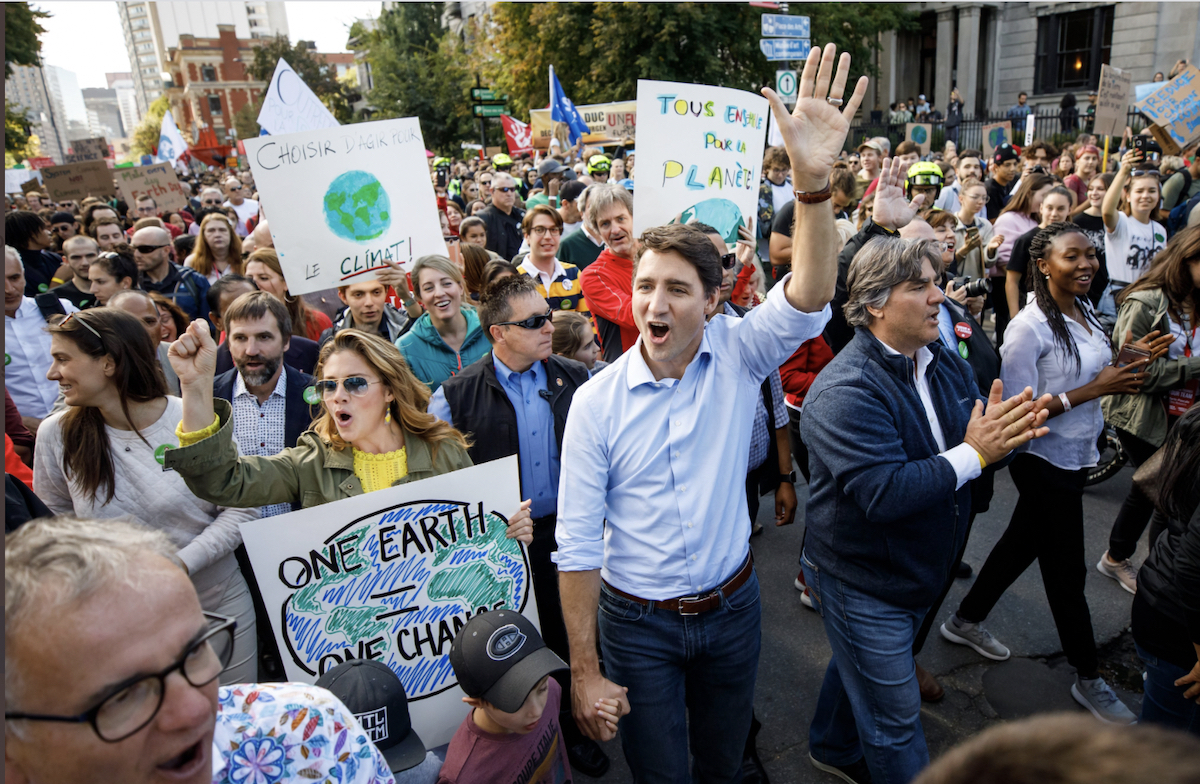 Liberal Leader Justin Trudeau, pictured above at a climate march in 2019, is looking to gain or maintain seats in B.C., where the climate crisis is top of mind for a quarter of the voters. File Twitter photo
Previous story
Next story

One reason Liberal Leader Justin Trudeau’s campaign may be flagging in his preferred stomping grounds in British Columbia, especially with young voters, is in part because he’s failing to push hard enough on climate change as a key election issue, one pundit suggests.

The Liberals continue to wobble as the Tories maintain the lead in the polls this week — with Erin O’Toole’s Conservatives at 32 per cent of the decided popular vote, while the Liberals have dropped two points to 31 per cent. Meanwhile, the NDP and Leader Jagmeet Singh inched up two points to 23 per cent, according to an Ipsos poll released Wednesday.

Climate change is a key issue this election, and not surprisingly, as hundreds died on the West Coast during a record-breaking heat wave at the end of June, and drought and wildfires continue to ravage the B.C. Interior.

Given its significance, it’s puzzling the Liberal leader hasn’t focused more on climate change while courting B.C. voters, particularly in the Lower Mainland where Trudeau traditionally has traction, said Hamish Telford, a political science professor at the University of the Fraser Valley.

Not to mention the issue’s import to millennial voters (those in the 25 to 40 crowd) whom the Liberals have to compete against the NDP for in urban ridings in the Lower Mainland, he said.

“What has been surprising to me in this election campaign is that Trudeau has not really pushed his advantage on this issue,” Telford said.

“If he were going to get a majority, it was almost certainly going to come from getting about 10 seats in Quebec and five seats in B.C., and climate change would be key to both of those provinces.”

Across the board nationally, regardless of age and gender, almost one in five Canadians (18 per cent) say climate change is the primary single issue on which they’ll vote for a party, according to recent Angus Reid polls.

That importance only mounts in B.C., where 24 per cent of those polled identify climate change as the top issue, a trend also seen among voters in Quebec (24 per cent), and in Ontario (18 per cent).

Where the parties stand in B.C.

In British Columbia, there’s pretty much a three-way tie between the top three parties, which are within five points of one another, with the NDP currently nursing a small lead.

“The big challenge with the youth vote is the youngest voters tend to be especially concerned about climate change, but are the least inclined to vote,” says Kathryn Harrison, a political science prof at the University of British Columbia. #elxn44

But B.C. is very regionalized when it comes to the vote on the ground, Telford notes, with much of the Interior and north of the province safe Conservative country, while Vancouver Island is largely an NDP stronghold with pockets of Green support.

As such, voter priorities vary from riding to riding, with resource development being favoured in the north and the Interior, while climate change, housing affordability, and child care are the top concerns in Metro Vancouver, particularly for younger voters.

But in some Lower Mainland ridings, it can be a three-way race, and the NDP is running a strong campaign, which might pull voters away from Liberals, giving an advantage to Conservatives in tight ridings, he said.

Trudeau, who generally presents as fairly green, should be pointing to his record and commitments around climate and that he needs a mandate to see them through, Telford said, especially in light of the recent dire report by the Intergovernmental Panel on Climate Change (IPCC) and the subsequent importance of the UN climate summit, COP-26, this fall.

“He could have said, ‘Look, we've just dealt with a pandemic, and now we have a climate change emergency that we need to deal with,’” Telford said

“He may still do that in the closing days of the campaign, but it seems to me that he's missing a huge opportunity to press (his) advantage on that issue.”

One stumbling block the Liberals have overcome when pitching climate plans in B.C. is the legacy of bad feelings from those opposed to the expansion of the Trans Mountain pipeline (TMX), said Kathryn Harrison, a political science professor at the University of British Columbia.

“The Liberals have a challenge among climate-concerned voters in British Columbia because many of those voters feel very strongly opposed to the Trans Mountain pipeline,” Harrison said.

However, TMX is less of an issue in this election than in 2019, when the Liberals retained seats in ridings where the project was expected to be a particularly contentious issue, Harrison said.

Timing of Liberals’ climate plan release could be strategic

The Liberals released their climate plan on Sunday, promising cuts to the oil and gas sector’s emissions with five-year reduction targets starting in 2025 and to pick up the pace of Canada’s transition to zero-emissions vehicles.

“I was surprised that the Liberals didn't come out with their climate plan earlier than they did, sort of two weeks into the campaign,” she said.

“That may have disadvantaged candidates in British Columbia, who haven't been able to say what's in there in the first couple of weeks on the campaign trail.”

However, the climate plan, and the full platform released Wednesday, have come out almost three weeks in advance of the vote and before the televised leaders’ debates, an arena where Trudeau has excelled in the past, Harrison said.

“I think they gave their candidates something to work with,” she said.

“It's increasingly clear that the Liberal Party's climate platform is much stronger than the Conservatives’.”

Both the Liberals and the NDP have taken significant steps forward on climate change, but Trudeau has offered more specifics on issues, such as carbon pricing, she said.

Waiting to release the climate plan may have been a strategic move on the Liberals' part, Harrison said, noting it provides the party the opportunity to beat or match the NDP’s commitments, like the five-year target set for the fossil fuel industry.

However, in B.C. — where the election plays out with some narrow margins on a riding-by-riding basis — pushing climate policy at the expense of other top issues, such as affordability, housing, child care, and health, might be risky.

“In ridings where the Liberals are competing with a Conservative candidate, the voters in between those two parties are less likely to be the ones where climate is the strongest motivating issue,” Harrison said.

And while Trudeau might well capture millennial and some younger Gen Z support by honing in on climate change, those demographics can be fickle about turning out at the ballot box, Harrison said.

“The big challenge with the youth vote is that the youngest voters tend to be especially concerned about climate change, but are the least inclined to vote.”

I’m not sure the timing of

I’m not sure the timing of the release is so important. The fully costed platform, including climate policy, is out now with several weeks to go before the election. And the positive reviews from climate experts like Andrew Weaver and Marc Jaccard will go far with voters who feel that climate is the defining issue of this election.

TMX is a defining issue for

But don’t worry, it is exported so it doesn’t count and all the profits will “fund the transition “.

In light of this obvious hypocrisy, I have trouble believing anything Mr. Trudeau and the Liberals have to say about their climate plan.