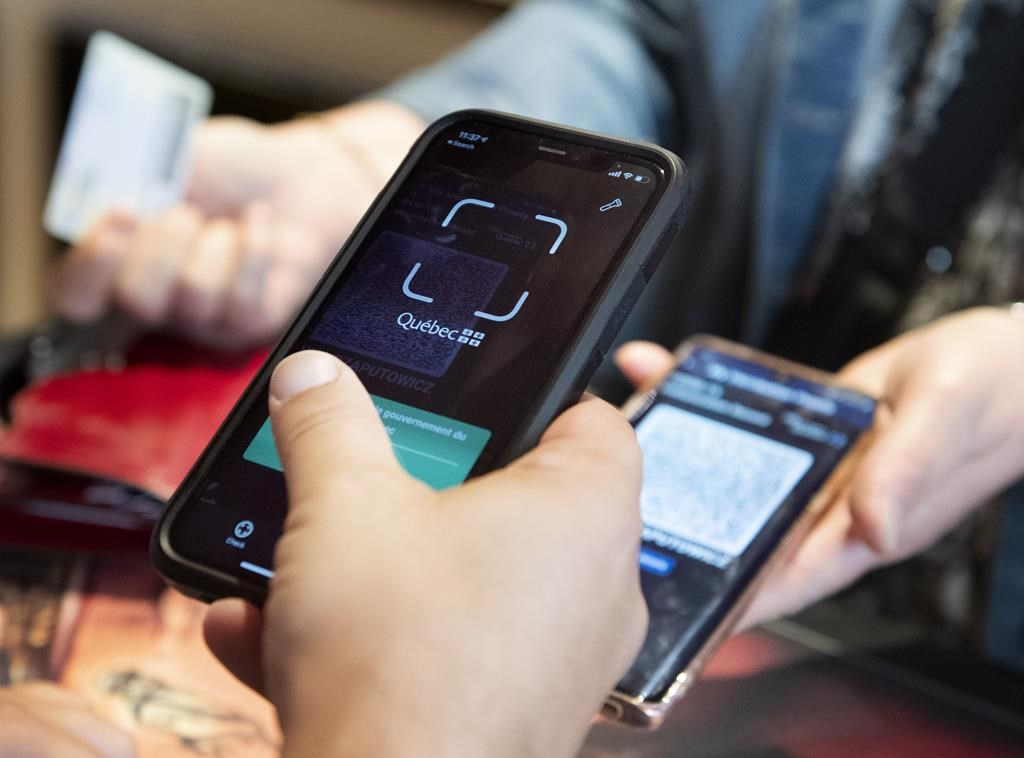 Jimmy Staveris, manager of Dunn's Famous restaurant scans the COVID-19 QR code of a client in Montreal, on Wednesday, Sept. 1, 2021, as the Quebec government's COVID-19 vaccine passport comes into effect. Photo by The Canadian Press/Graham Hughes
Previous story
Next story

A new poll suggests eight out of 10 Canadians backed the notion of a COVID-19 vaccine passport in the days leading up to this week's rollout of a certificate system in Quebec and news that Ontario would soon follow suit.

The poll also suggests Canadians were largely split on whether the reopening of in-person learning at elementary and secondary schools changed any concerns they had about the Delta variant.

The latest Leger poll found 56 per cent of Canadian respondents said they "strongly support" provincial vaccine passports for indoor places including bars, restaurants, gyms, concert halls and festivals when asked last week, while another 25 per cent said they "somewhat support" the measure.

The online poll collected responses from 1,544 Canadians over the age of 18.

The polling industry's professional body, the Canadian Research Insights Council, says online surveys cannot be assigned a margin of error because they do not randomly sample the population.

Respondents from Atlantic Canada and British Columbia were most in favour of a vaccine passport at 85 and 84 per cent total support, respectively. Those from Manitoba and Saskatchewan were most opposed, with 26 per cent saying they either strongly or somewhat opposed the measure, while 20 per cent of Alberta participants strongly opposed.

Support was highest among respondents aged 55 and older at 86 per cent, and lowest among those 35 to 54 years old at 75 per cent.

The poll, which also surveyed 1,004 Americans, found 59 per cent support for a vaccine passport among U.S. participants, and 41 per cent opposition.

Meanwhile, 44 per cent of Canadian respondents said plans to reopen schools made them more worried about catching the Delta variant, while seven per cent felt less worried. Another 47 per cent said reopening schools did not change their feelings on catching the COVID-19 variant.

Sixty per cent of respondents said classes should shift to virtual platforms if there was a significant increase in COVID-19 infections within their communities, and 40 per cent said in-person classes should continue as planned.

Half of Canadians surveyed said masks should be worn at all times on high school premises, and 12 per cent said they should only be worn by students who don't have proof of vaccination.

Fifty-five per cent of Canadians asked were satisfied with their province's COVID-19 measures, compared to 52 per cent of U.S. respondents who said they were pleased with measures introduced by their state.

More than three-quarters of Canadian respondents — 78 per cent — said governments shouldn't lift all COVID-19 restrictions "right now," compared to 16 per cent who favoured removing all pandemic measures at the time of the survey.