New movies from Marvel, from an Oscar nominee, and a modernized Cinderella 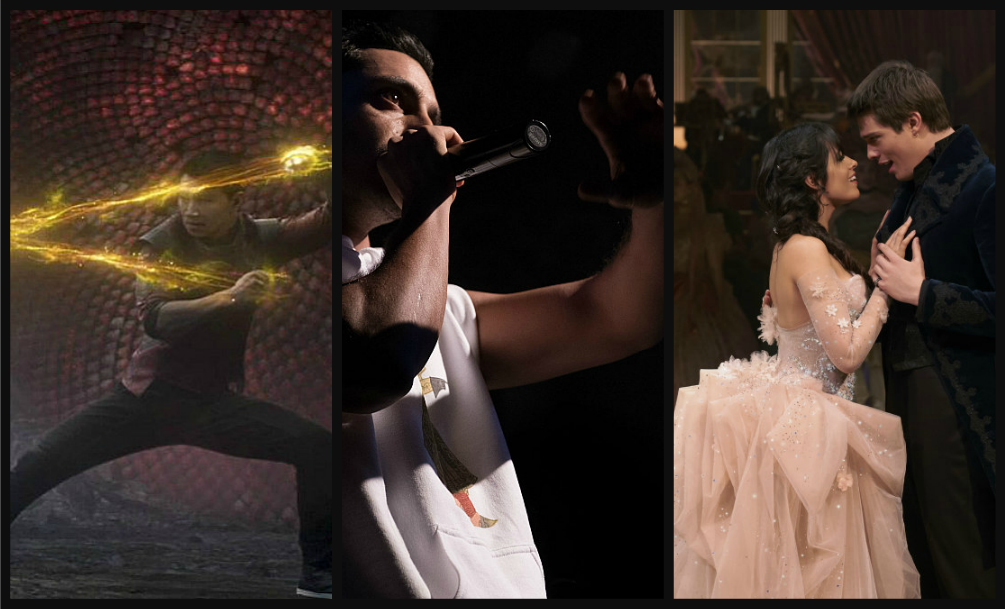 There's one giant movie this week, Marvel's 25th, and a few with smaller profiles.

Meanwhile, the Vancity Theatre is opening four new titles, all in just this week. On Broadway has luminaries like Hugh Jackman, Andrew Lloyd Webber, and Helen Mirren talking about the Great White Way. The Perfect Candidate is about a woman trying politics in Saudi Arabia. The Meaning of Hitler asks how could a modern country have elected a guy like that, a common conversation topic these past few years. And Iorram (Boat Song) is a lyrical portrait in Gaelic of a Scottish fishing village.

I didn't have a way to preview them, but check here for more information.

And these are the films playing elsewhere that I have seen.

Shang-Chi and the Legend of the Ten Rings: 3½ stars

SHANG-CHI AND THE LEGEND OF THE TEN RINGS: Marvel Studios moves onwards by elevating a minor character from the comics into a grand spectacle about family and tradition in China. You can see why. Diversity, for sure. But also, China is a huge market for the movie industry, although there are worries that permission to show the film there has been slow coming. And for us, there's that big connection: Star Simu Liu is Canadian and well-known from the CBC series Kim's Convenience. He's now a big action star, not super charismatic, but likable onscreen and handy with the fists and kicks.

The story is about family, tradition, finding your own way, and learning the truth about your father. And it's also a special effects extravaganza, especially the last half hour when we get big battles, and not just one, but two, dragons. Before that, there are three tremendous action pieces: a prolonged fight on a bus, a sequel with that bus crashing through San Francisco streets and over parked cars, and later a pursuit and fight down the scaffolding of a highrise building. Why? Well, the story gets complex and hard to follow.

Shang-Chi was trained as a killer by his crime boss father (played by renowned Hong Kong star Tony Chiu-Wai Leung), who is immortal because of those rings. Son leaves, dad sends thugs after him, son goes home to confront dad. Awkwafina plays a friend who comes along and brings her sense of humour. Michelle Yeoh plays his aunt; Meng'er Zhang plays his sister and Ben Kingsley is an actor from Liverpool. He doesn't fit in but adds humour and some major guidance so that the film can shift to a magical land called Tal-Lo, where dad thinks his dead wife is and can be revived. It's a grand fantasy with a lot of the usual Marvel elements, but with a fresh tone, though overly complicated. (Scotiabank, 5th Avenue, Dunbar, Marine Gateway, and many suburban theatres.) 3½ out of 5

MOGUL MOWGLI: This film is also about family tradition and finding your own path in life. Riz Ahmed, who was so good in Sound of Metal, is in top form again in a story that is oddly similar. He plays a young rapper (which he is in real life) who is lost from his heritage, both actually and symbolically. His family is Pakistani, lives in a suburb of London, and he has gone to the U.S. to further his career. He's offered a spot on a big star's tour and returns to England for what would be his big breakthrough. Dad scoffs, though. “Do people even remember the opening act?” he says. Somebody else chides him for turning his back on his heritage by going by the name Zed, not his real one, Zaheer.

The pressure makes him sick, and he's diagnosed with an auto-immune disease. His body doesn't recognize him anymore. (How symbolic is that?) There's an experimental treatment available, but it has side-effects. It can make him sterile, which would really end his family life. That fits the theme of the film, but a subplot of getting his sperm frozen is not needed. More relevant are the scenes he dreams while sick. They're about India and the partition his father lived through. He's avoided the subject, but a character in his dream keeps repeating the words Toba Tek Singh. That's the name of a town that became symbolic of the horror of that partition, especially thanks to a recent novel. It's also symbolic of the father-son rift that has to be overcome. Ahmed wrote the film along with a friend, Bassam Tariq, who directed it. The issues and emotions feel real because they are, and the final scene is genuinely uplifting. (International Village, Langley, and Victoria.) 3½ out of 5

CINDERELLA: It's only been six years since the last live-action version of the classic fairy tale, but this one couldn't be more different. That one didn't tamper with it very much; this one does. Cinderella is no longer passive; she wants a career as a dress designer and store owner. Over in the castle, the prince doesn't want to be king and live by constricting rules. He has a sister who is better qualified and motivated. She wants to improve people's lives and fight poverty and inequality. She can't, though, because the rules bar women from occupying this throne.

The modernizing touches don't stop there. The fairy godmother is a gay man, and Black at that (singer Billy Porter). Cinderella is played by another singer, the very popular Camila Cabello, whose background is Mexican and Cuban. The songs they and most of the cast sing and often dance to are a mix of new and known (Janet Jackson, Ed Sheeran, Madonna, Gloria Estefan). The film has energy, optimism, and quite a bit of humour — often about the image of the king, played by Pierce Brosnan (and even about his singing abilities). There's a warm chemistry between Cinderella and the prince (Nicholas Galitzine), and I couldn't help thinking about Harry and Meghan because their views on royalty are so similar. This is written and directed by Kay Cannon, who did the same for the Pitch Perfect movies and before that wrote for TV's Third Rock. Fairy-tale purists may be shocked (as when a town crier raps lines like “Gather round. Heed my cool”), but modern girls will probably like it. (Amazon Prime) 3 out of 5

POWDER KEG: This Danish film should have been much more tense dealing as it does with terrorism, racial disturbance and cultural insult. It dramatizes and shows the buildup to a terror attack in Copenhagen in 2015 which followed the intense and angry reaction to an attack at the offices of Charlie Hebdo. The political and satirical magazine in Paris had published a cartoon that originated in Denmark and was accused by Muslims of defaming Allah. The material is there but the film takes a long time getting it in order and that dulls its impact.

We watch four men at length. They have no connection to each other and until their paths cross late in the film, we have to figure out ourselves how they fit into the story. One is easy to place. Omar is an angry Muslim. He's been in prison, watches video that says “the caliphate is the future” because it will create paradise. Dan is Jewish, has a middle-eastern -sounding last name which limits his job prospects and takes work as a security guard at a synagogue. Finn is a filmmaker being pressured by his producers to deliver fast. Rico, played by Game of Thrones actor Nikolaj Coster-Waldau, has family problems. He's a weary cop worn down by having lost his wife to another guy and learning that his two daughters like him too. We go back and forth among them learning all their frustrations.

Omar, played totally believably by Albert Arthur Amiryan, has a big gun, attacks a meeting where the cartoonist is to speak and meets even more frustration. It could be a strong drama, but plays like a plain documentary. (Available starting Tuesday at Bell, Rogers, Telus, Apple, Google Play and other on demand sites) 2 ½ out of 5