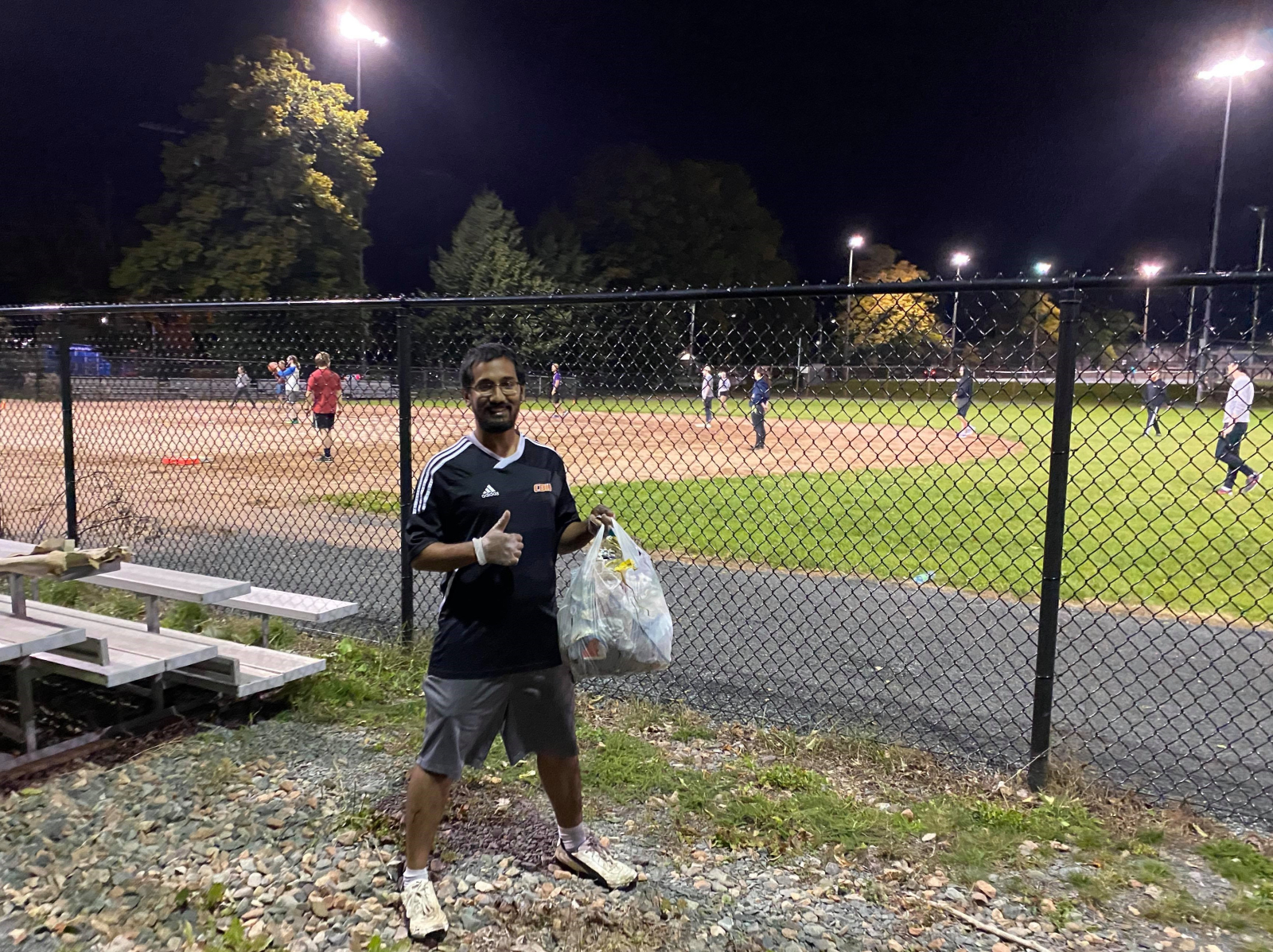 Shitangshu Roy doing a cleanup of the Canada Games Diamond in between innings at a kickball game run by Halifax PLAYS, a sports non-profit he co-founded in 2012. Photo submitted by Shitangshu Roy
Previous story

As part of a series highlighting the work of young people in addressing the climate crisis, writer Patricia Lane interviews Shitangshu Roy, a computer expert who believes apps can help combat climate change.

Shitangshu Roy wants to hack a solution to end catastrophic climate injustice. In April, this 29-year-old Haligonian started One Act at a Time to Heal the Earth (O.A.T.H.E.), which paired mentors with 130 youth from across the world to design climate change solutions. The young problem-solvers came from 15 countries and spent 48 hours working on their projects. The winners included a group of 10-year-olds from Florida who developed a concept for an app to remind users that polluting is a bad idea, Indonesian youth who built an app allowing community scientists to monitor the locations of mangroves and a multinational team that used blockchain to track fish catch and consumption. There was even a Canadian team that built vending machines able to pay users for a plastic waste deposit.

Tell us how the project got started.

Three years ago, I learned the leatherback turtle is at risk of extinction from plastic bags. For 116 million years, it has adapted so well to life in the oceans; it is one of the only creatures able to eat jellyfish. Tragically, it often mistakes floating plastic bags for prey and chokes or is slowly poisoned to death from ingested plastic.

At first, I felt both outraged and powerless. But then I heard about Afroz Shah, an environmental lawyer in India who spent a weekend cleaning up the beach near his childhood home and inspired thousands to do the same. This resulted in the removal of 5.3 million kilograms of waste from the shores of Mumbai in three years.

I resolved to pick up one piece of litter every day, and with O.A.T.H.E., turned this into a global project. But even if everyone in every city in the world picked up trash, it would not be enough to meet the depth and scale of climate and ecosystem breakdown. I wanted to know how I could help scale up the commitment that we must all make.

In April 2020, I attended Ocean Bridge, an environmental leadership program helping youth learn about environmental stewardship and ocean conservation. With their help, I mustered the courage to explore turning O.A.T.H.E. into a non-profit. In May, I further developed it at the Hack the Earth hackathon. Hackathons are online events that bring youth together for short periods of time to develop novel solutions to current problems.

Need a climate solution? There could be an app that can help. #ClimateSolutions #ClimateCrisis

What is it about your background that makes you so committed to this?

I live in Halifax, but my family thinks of Bangladesh as home, too. Both my homes are sinking as we speak. In the last monsoon, fully one-third of my Bengali home was underwater. In the next 30 years, Halifax will see sea-level rise of one metre or more. Bangladesh is going to generate 18 million refugees by the time I am 60. How will we house them when our own homes are burning down or flooding out?

My dad passed when I was only 14, and my mom taught me we make our own luck.

I played soccer at school. When a tournament was scheduled, I did not even imagine going because I was not a very good player, and we certainly did not have the money. One day, the coach called me into his office. I thought I was going to be asked to step off the team, and that made sense to me because if I could not participate, the other players could not rely on me. Imagine my surprise when instead the coach told me that all the teachers had got together and raised the money for me to go! I was absolutely dumbfounded. What a lesson in the power of community.

I have paid that forward by starting Halifax PLAYS, which 10 years later allows 4,500 Haligonians, many of whom are immigrants, to play 19 sports in over 150 programs. For many, this is an opportunity to socialize and make friends. I am especially glad that the very first volunteer actually met his partner through Halifax PLAYS, and they just had a baby!

There are so many big problems in the world and so many ways to make a difference, but how can I make the biggest impact?

So many young people have fantastic ideas, but they lack the resources to implement them. I wish we could emulate countries like France that support basic living expenses for people with good ideas.

People of all ages and all walks of life are making the right kind of changes.

Find a team. You will have more fun and get more done!

Climate justice is a set of grave emergencies. You are needed. Every action matters.

How helping save the oceans cured one young woman's climate grief