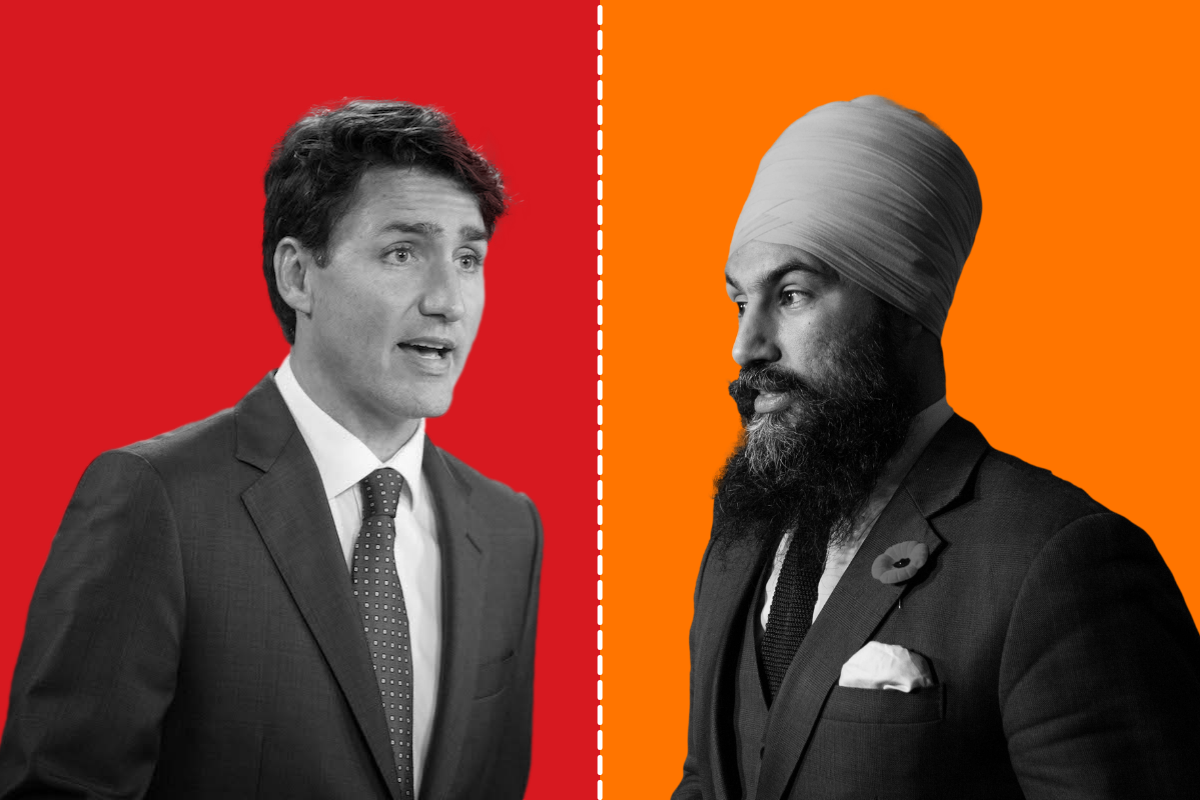 The turnout of voters aged 18 to 34 could help to determine who forms the next government. Photos by Alex Tétreault, illustration by Canada's National Observer
Previous story
Next story

With a federal election set for Sept. 20 and parties vying for voters’ support, a big cohort of voters may prove to be the most influential — those in the 18- to 34-year-old crowd.

With many right-wing supporters staying loyal to the Conservatives, the battle for left-wing younger voters could be a key factor this election, especially if they come out in force compared to previous elections.

By press time, neither the NDP, Liberals nor Conservatives responded to Canada's National Observer's request for an interview about the parties’ strategy to attract younger voters.

Rachel Sultana, 21, a fourth-year psychology student at the University of Waterloo, voted in the 2019 election and plans to vote this time around.

Although Sultana’s views align with the NDP, she worries about splitting the vote and ending up with a Conservative majority government.

“Even though Canada has multiple parties, it's still very much a two-party system,” says Sultana. “I'd much rather have a Liberal government than a Conservative government, especially with a lot of things that (Conservative Leader) Erin O’Toole has said. He's not someone I want in power.”

In previous elections, strategic voting has been used to prevent a certain party from winning. In the case of NDP supporters, it has meant some voting Liberal to stop the Conservatives from winning.

“As much as some people disagree or don't think it, every vote does truly matter. I think that by getting more young people voting, it will make us seem more … like an actual threat,” she says.

“I follow him on TikTok. I watched his “Among Us'' stream he did with Alexandria Ocasio-Cortez,” says Sultana. “It's a really good way to reach younger audiences, especially that younger demographic ... they’re trying to get out … to vote because I don't know how many people my age necessarily have a subscription to a physical newspaper, or even will go out to physical events.

The federal NDP is reaching young voters on TikTok, writes @CamillaBains. The question is, will they cast a ballot? #Elxn44 #cdnpoli

“But if you're doing something that they’re already participating in every day, I think that's a really good way to get engaged with younger voters.”

Sultana says many young people may avoid voting because they think it won’t make a difference.

“There are specific things that affect us when an election is called, and if someone else came into power. For example, the NDP has a campaign promise for dental care and universal basic income. I know that a lot of people my age aren't covered by insurance. Another thing is student loans. The NDP wants to reduce student debt — I'm not even done my fourth year, and I have $30,000 in student loans.”

The Liberal Party’s platform also targets students, promising to waive the interest for full-time and part-time students on the federal portion of Canada Student Loans and Canada Apprentice Loans until March 2023.

“I'm in a state of trying to make more conscious decisions and do better. I just disagreed with my last choice of voting. I lean a little bit more on the progressive side of things — personally, in social matters, and economic matters as well. I just kind of like where the NDP is going a little more than (the Liberals). Definitely, the Conservative Party’s off the books for me.”

Reyes says some of the issues he’s passionate about are climate change, Indigenous reconciliation, and combatting racism — all of which he says the NDP is addressing.

“We see how Indigenous peoples are still treated to this day,” says Reyes. “All kinds of communities are still being marginalized today and (there are) people trying to act like it just still doesn't go on.”

Another issue Reyes is passionate about is wealth inequality, saying, “I'm tired of seeing billionaires exist while we have people going homeless in a pandemic.”

Polling expert David Coletto, CEO of Abacus Data, says although they may be important, there’s no hard evidence that young Canadians will show up to vote in greater numbers than they did in the last two federal elections.

David Coletto on the possible impacts of young voters on the 2021 federal election.

The NDP has been using social media not only to campaign but also to encourage Canadian youth to get out to the polling stations.

While the Liberal and Conservative parties have largely been using Facebook in their campaigns, the NDP has been using other online platforms to reach the younger cohort of voters, including TikTok.

According to a National Observer analysis of Elections Canada’s Party Quarterly Financial Returns, the Liberals raised more than $6.8 million during the first six months of this year compared to the NDP’s $3.2 million.

Lack of money compared to its two main rivals may help to explain why the NDP is more active on social media platforms such as TikTok where they do not have to pay to reach their audience.

The NDP has been smart in its tactics to reach young voters. Although they may appear to be engaged in politics on social media, their real impact will be felt if they turn up to the polls to vote.

“Nowadays, with youth having access to social media, they just have so much more information,” says Sultana. “I do think that a lot of youth are a lot more politically interested (than) maybe 10 or 20 years ago.”

With files from David McKie and Nora Legrand

Jagmeet Singh on NDP's position on banning Proud Boys. Will it resonate?

I dont trust mainstream polling to capture under 40 voting intention. I dont answer the landline and I am 68. who the hell are the polling firms getting to answer? who answers unknown calls on their cells? all MSM is corporate owned. of couse they have CONS in the lead in the "balanced" polls
really.
hope the pissed off youngster do get to the polls and vote. we are f'd if they dont
anybody see nefarious reasons why no polls on campuses?
mail in so fucking hard to do ?
I assumed mail-in ballots would be stacked in post offices and libraries like tax return forms. and handed out at post secondary frosh weeks with every welcome package. sillly me!