A 'shining example of Canadian compassion' 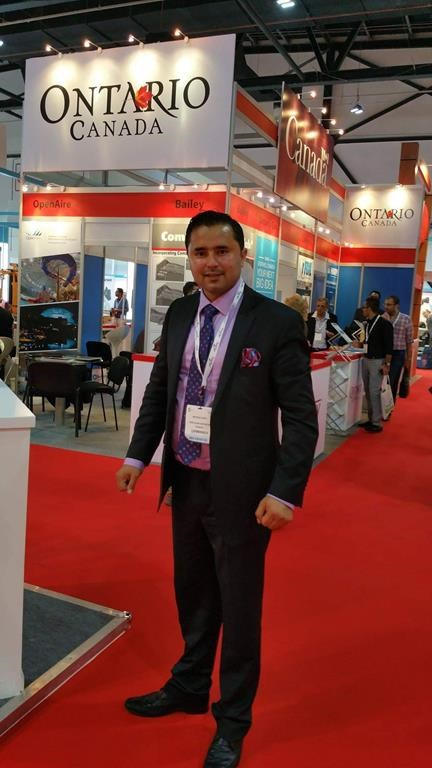 Wais Habibzai, an Afghan-Canadian property developer seen at Big 5 Dubai Expo at the Canada pavilion in an undated handout photo, has spent $50,000 providing Afghans who have fled the Taliban with essentials. Handout photo by Marques Declou
Previous story

A Toronto property developer who has worked tirelessly to help hundreds of people fleeing the Taliban settle in Canada — spending $50,000 to buy them essential supplies — has been praised as a “shining example of Canadian compassion” by the immigration minister.

Wais Habibzai, who fled to Canada from Afghanistan in 1992 after his house was destroyed by a rocket, has launched a personal aid effort to provide clothes and other necessities for refugees who escaped Kabul.

Around 1,000 refugees are being provided with food and accommodation by the government as they prepare to resettle in Canada, Habibzai said. But he said the refugees, isolating in several Toronto hotels, lack many essentials, including clean underclothes, phones, and baby bottles.

Many of the refugees arrived with only the clothes on their backs and Habibzai has been buying them outfits from Walmart.

The Afghan-Canadian businessman has turned conference rooms in refugee hotels into repositories for clothing and necessities, recruiting dozens of people to volunteer as translators and help fund the aid effort.

He has made daily trips to local stores to buy underwear, shoes, jeans and shirts, bottles and baby formula and personal hygiene products. He has also bought chocolate, candy and toys for children, as well as prayer mats, and hijabs for some older women.

Habibzai, 40, said he is delighted to see young refugees, who arrived in traditional Afghan attire, walking around Toronto hotels “as true Canadians” in jeans and T-shirts emblazoned with the Canadian flag.

“Some came with (traditional clothes). The next day they were wearing the shoes I gave them: the T-shirts, jeans. I went to Walmart and bought them some T-shirts with the Canada flag. They loved it. They were walking about as true Canadians,” he said.

Marco Mendicino, minister for immigration, refugees and citizenship, said welcoming the Afghans “wouldn’t be possible without the generosity of Wais and so many others like him.”

“As Afghan refugees sought shelter from persecution and war, Canada stepped up. And as refugees now begin new lives in Canada, Canadians are stepping up. Few embody that spirit better than Wais Habibzai. Wais is a shining example of Canadian compassion,” he said.

“And as a refugee himself he’s the living embodiment of Canada’s ‘intergenerational cycle of immigration’ where each generation of newcomers welcomes the next.”

The Immigration Department says it has helped 3,700 evacuees, including Canadian citizens and permanent residents, flee Afghanistan, which recently fell to the Taliban. But it has faced criticism for not helping enough escape. Its special immigration program has been plagued by bureaucratic and technical problems.

Habibzai has been visiting refugee hotels each day to find out what those who managed to reach Canada need. He has recruited Afghan family and friends to translate and has been raising thousands of dollars to top up the $50,000 he has spent himself.

“I said: ‘Give me a list of what you need. I will go buy it: diapers, milk, you name it. One man said: ‘I have only one pair of underwear’. They were always asking for necessities like this,” he explained.

He said refugees who had left family behind were desperate to know they were safe, but often had no way of making contact.

Habibzai bought them phones and SIM cards, as well as chargers that fit Canadian sockets, so they could stay in touch with relatives and friends sheltering from the Taliban.

He has also offered to house several desperate families in his vacant properties rent-free for a year. But he says many new arrivals have money and are well-educated.

The Toronto businessman, whose father was the manager of an Afghan national TV station and former diplomat, was forced to flee Afghanistan after the mujahedeen — religious fighters who fought the Russian occupation, evolving into the Taliban — destroyed his home with a rocket launcher.

He came to Canada in 1992, at age 14, and said his experience as a new immigrant motivated him to help the fleeing Afghans. He wants to “give back” to the country that took him in, because he remembers how “tough” it was for him arriving in Canada “with nothing.”

“My dad had to leave the job, and since our home got destroyed by the rocket launcher,” he said. “It was very difficult for my father to get a rental apartment (in Canada) because he had no credit, no job, and his English was broken. It was tough. My father was a strong man. He wanted to work, whatever it takes, no matter what, even though he was a diplomat for years."

Eventually, his father took a job as manager of a convenience store. Habibzai eventually founded his own property company, buying his first house at 18 and selling it to fund his university fees. He now builds homes in Toronto and runs a real-estate company, as well as technology companies in Afghanistan.

“Today I am building homes and, thanks to Canada, I got my education here. My brother played soccer professionally for Team Canada,” he said. “It is all because of this beautiful country. And I want to give back.”

The businessman has also been giving the new arrivals tips on Canadian life, including how to download apps and order in pizza.

“Two things I tell them about this country are, 'Study and work and don’t think about nothing else,’” he said.

“I tell them, ‘Listen, I am nobody. I am just this young Afghan Canadian businessman. I came here, like you, with $20 in my pocket or not even that, with nothing. But Canada is the land of opportunity: you can be somebody.’”

This report by The Canadian Press was first published Sept. 12, 2021.