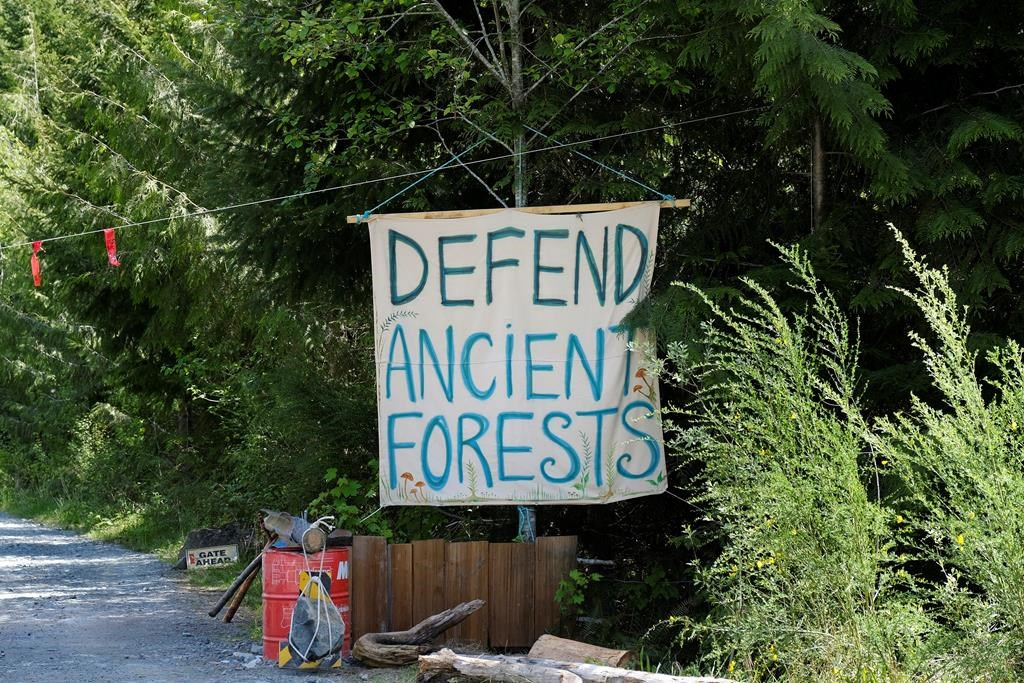 A sign is shown at the entrance to Eden blockade in the Fairy Creek area near Port Renfrew, B.C., on Tuesday, May, 11, 2021. File photo by The Canadian Press/Jen Osborne
Previous story
Next story

A British Columbia forestry company appeared in court Tuesday to apply for a one-year extension of an injunction against ongoing protests over logging of old-growth trees in a remote area of southern Vancouver Island.

A lawyer for Teal Cedar Products Ltd. told a B.C. Supreme Court judge that the protests against logging are becoming more sophisticated, organized and dangerous and “anarchy” will result if the extension is not granted until September 2022.

"It falls on this court to restore law and order on southern Vancouver Island," said Dean Dalke. "If there is no injunction in place, the blockades will be there."

Almost 1,000 people have been arrested in the Fairy Creek area, north of Port Renfrew, since May when the RCMP started to enforce an earlier B.C. Supreme Court injunction against blockades erected in several areas near logging sites.

Dalke said the blockades are impeding the company’s legal rights to harvest timber and alleged that the actions of the protesters pose dangers to employees and the RCMP.

He said the numbers of protesters in the area ranges from 100 to 500 people as a bus service brings supporters to the area on weekends.

Dalke said the protest is organized through the use of social media, adding that a helicopter drops supplies to people camped deep in the forest.

He said the protesters have placed spikes in roads, chained themselves to gates, sometimes dug themselves into trenches or attached themselves to trees in efforts to thwart police who are enforcing the injunction.

"These are clearly designed to frustrate RCMP enforcement," said Dalke. "This is what the RCMP has been faced with since May 18, and it's been getting worse."

The Teal Cedar injunction is one of several civil court applications being heard this week in Nanaimo.

The RCMP has applied to the court to extend search and access powers in the injunction area, and several citizens representing the protesters, known as the Rainforest Flying Squad, are asking the court to find that the Mounties' enforcement actions have been unlawful.

This report by The Canadian Press was first published Sept. 14, 2021.