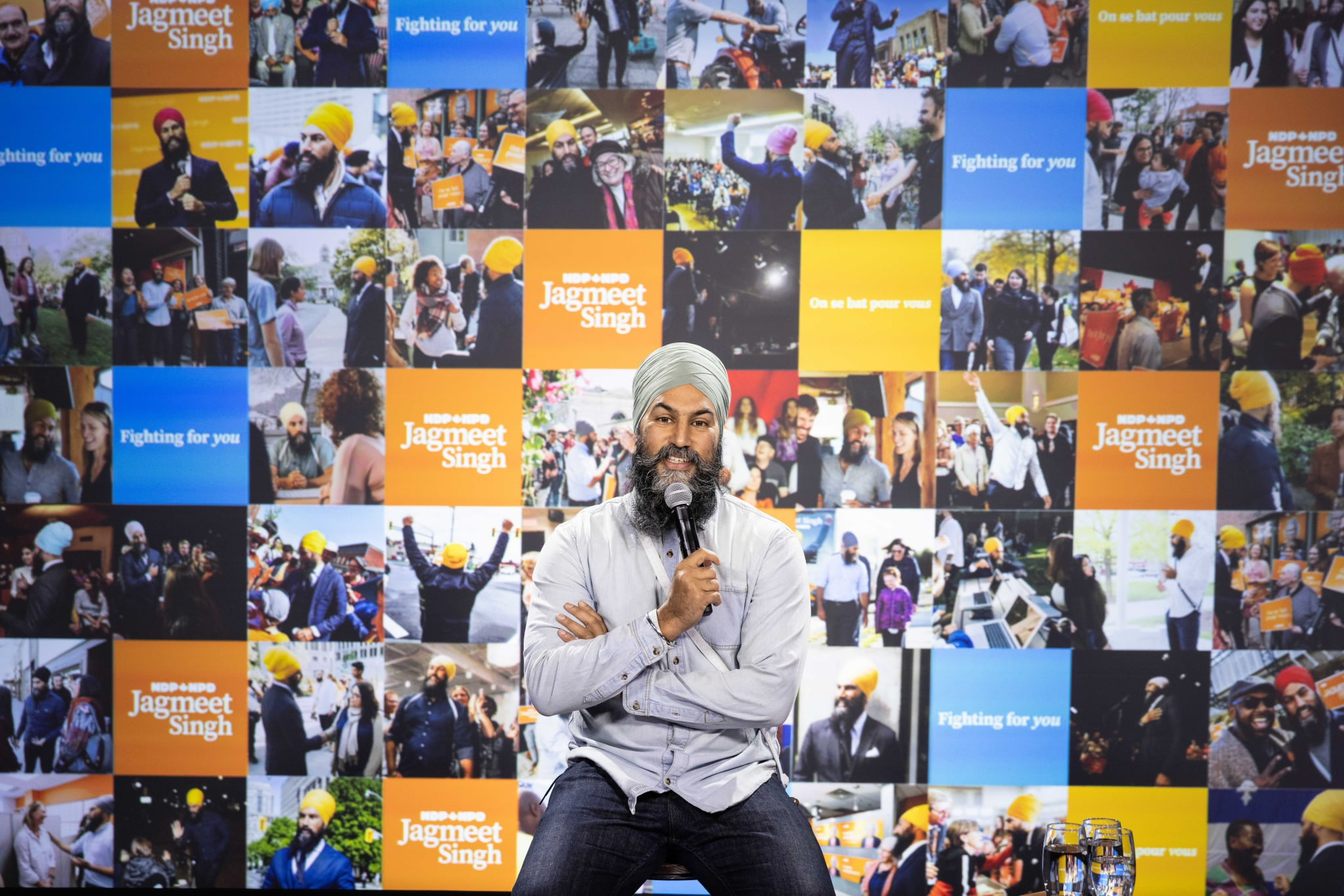 As the federal election campaign nears its end, NDP Leader Jagmeet Singh is fighting off criticism from progressive environmentalists by trying to shift the focus back to Justin Trudeau’s climate record. Photo via Singh / Facebook
Previous story
Next story

As the federal election campaign nears its end, NDP Leader Jagmeet Singh is fighting off criticism from progressive environmentalists by trying to shift the focus back to Justin Trudeau’s climate record.

In the past week, the NDP has appeared vulnerable on the climate file. A demonstration Thursday by Climate Justice Toronto called on Singh to protect old-growth from logging at Fairy Creek. The party also recently took flak for not having a clear stand on the Trans Mountain expansion project, at the same time the Liberals have been highlighting endorsements from climate experts like Mark Jaccard and former B.C. Green Party leader Andrew Weaver.

But in the days since Trudeau was in B.C. to welcome the endorsement from Weaver, the Liberals’ support has fallen in that province to the NDP’s benefit.

With voters heading to the polls Monday, Singh is attempting to capitalize on the moment by stressing that when it comes to climate, the incumbent Liberals have been an “abject failure.”

Singh summarized Trudeau’s climate record as the worst of any G7 country, saying the Liberals promised to end fossil fuel subsidies but increased them instead, and exempted the largest polluters from the carbon tax.

Canada has a G20 commitment to phase out inefficient fossil fuel subsidies, referring to subsidies that incentivize oil and gas exploration. The Liberals have promised to end those by 2023 instead of a previous commitment of 2025. But since 2018, the International Institute for Sustainable Development (IISD) found governments in Canada have spent at least $23 billion on three megaproject pipelines. The IISD also found that 2020 saw a 200 per cent increase in fossil fuel subsidies to the oil and gas sector.

“We believe we need to fight the climate crisis with everything we have,” Singh said on Friday.

“Our kids deserve it, the future deserves it, and we need to do it right now.”

“I believe very deeply in protecting and conserving the environment, (but) I also believe very strongly in respecting Indigenous rights and Indigenous land rights,” he said.

NDP Leader Jagmeet Singh is calling Justin Trudeau's plans an "abject failure" when it comes to climate action, as the parties enter the final days of campaigning. #elxn44 #cdnpoli

“I don't believe at all that it's the position of settlers to tell Indigenous communities what to do with their land,” he added.

Instead, Ottawa should provide resources to Indigenous communities to help with conservation, Singh said.

“Our plan would be to release $500 million in funding to truly support Indigenous communities in conservation and stewardship,” he said.

“They know what to do, they have the knowledge, they have the experience, they need support, and for a long time, they've been stripped of economic resources.

“We would support them in a real way,” he said.

As videos of police pepper-spraying and dragging protesters at Fairy Creek went viral earlier in the campaign, the Liberal Party promised $50 million to protect old-growth. North Vancouver Liberal candidate Jonathan Wilkinson said at the time that a re-elected Liberal government wouldn’t try to assert its jurisdiction over the province, but that it would work with it.

“The NDP (seems) to care about climate change, but independent experts gave their climate plan an F,” he said.

On Friday, Singh highlighted an endorsement of his climate plan from Protect Our Winters, which gave the party the highest ranking of the three leading parties. The NDP got an A-, Liberals got a B, and the Conservatives a D. Of the other parties, the Greens tied the NDP, the Bloc Québécois got a B-, and the People’s Party of Canada was given an F.

This week, the global Climate Action Tracker analyzed countries’ updated 2030 greenhouse gas emission reduction targets and called Canada’s “highly insufficient.” That means that without increased action, Canada is on track for 4 C warming — far higher than the Paris Agreement goal of as close to 1.5 C as possible.

Election 2021: Who are the candidates in my riding?

Election 2021: Find out how your riding has voted in past elections

"Jagmeet Singh is fighting off criticism from progressive environmentalists by trying to shift the focus back to Justin Trudeau’s climate record."
"Progressive environmentalists" (aka Liberal supporters and shameless sell-outs) should worry less about the NDP's words and more about the Liberals' actual record. Appalling. The Liberals plan to expand fossil fuel production and fail on climate.
*
"endorsements from climate experts like Mark Jaccard"
Only three years ago, Mark Jaccard (not a climate scientist) opposed TMX and called Trudeau's climate response Orwellian. Now the Liberals top his list for "climate sincerity", and TMX no longer figures in his analysis. Whiplash.
Jaccard 2018: "National studies by independent researchers (including my university-based group) consistently show that Mr. Trudeau's 2015 Paris promise of a 30% reduction by 2030 is UNACHIEVABLE with oil sands expansion."
"Trudeau’s Orwellian logic: We reduce emissions by increasing them" (Globe and Mail, 20-Feb-18)
*
Neither the IPCC nor the IEA endorses fossil fuel expansion — the basis of the Liberals' and Corporate Canada's anti-climate plan. The Liberals' plan takes us in the wrong direction. Building fossil-fuel infrastructure locks us into a fossil-fuel future.
Pipelines and oilsands projects take decades to recoup their capital investment. Not something you can scale down or switch off. Once you sink billions into oilsands expansion, you are committed. The more fossil-fuel infrastructure we build, the more difficult the shift and the greater the delay. There is no turning back from Trudeau's expansionist agenda. Only a messy collapse. A thriving fossil fuel industry is antithetical to climate action.
Fossil fuel subsidies? With carbon capture and storage (CCS) and SMRs on the horizon — plus $260+ billion in unfunded oil & gas liabilities in AB alone — it is a safe bet that federal subsidies will go up, not down.
A vote for the Liberals is a vote for Suncor, CNRL, and Cenovus. A vote against your grandchildren.

Always nice to see when the

Always nice to see when the NDP talk about the environment and climate change, unfortunately it's only during an election. Otherwise it ends up in the NDP policy wilderness . . . I have to say the same goes for Indigenous issues. The NDP politicizes everything. They still haven't made it into the 21st century.