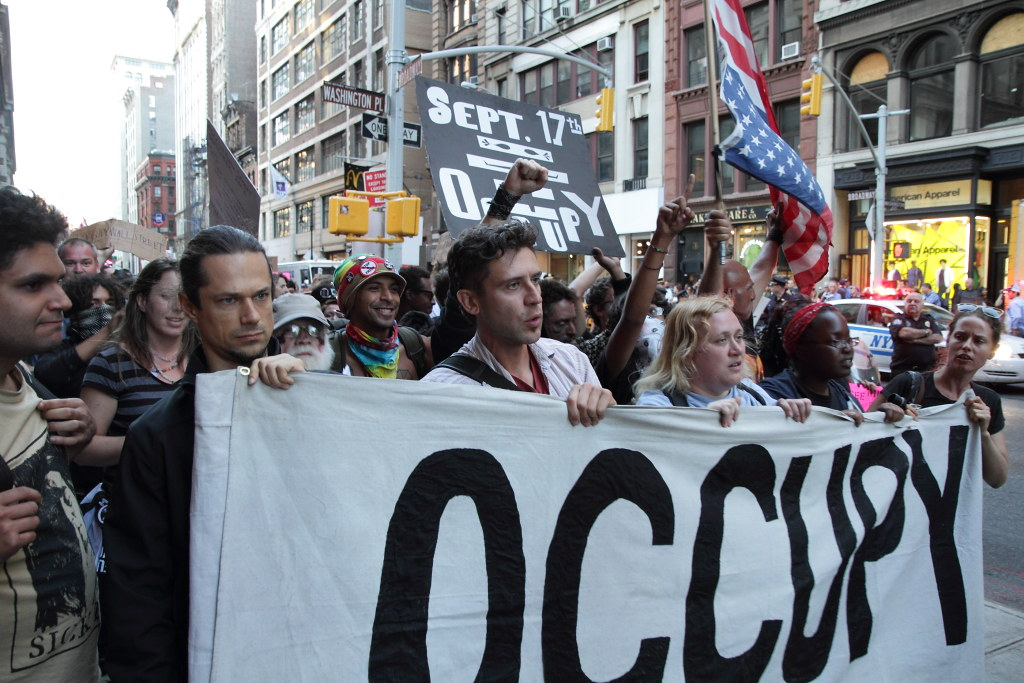 Today, Sept. 17, marks the 10th anniversary of Occupy Wall Street (I know, I was surprised, too). On this day in 2011, a mass protest began in New York City’s Zuccotti Park, located in the heart of the financial district. It lasted weeks and spread to cities around the world, including many in Canada.

And while the protests themselves eventually fizzled, Occupy profoundly shifted the zeitgeist. In the wake of the 2008 financial crisis, these protests elevated the issue of inequality to an unprecedented degree, and exploded the concept of “the one per cent versus the 99 per cent” into the public imagination.

Now, 10 years later, income and wealth inequality in Canada has only gotten worse, particularly during the pandemic. The most vulnerable and precarious have lost income while others have profiteered from the crisis. The distinguished Dalhousie University economist Lars Osberg, in a paper published by the Canadian Centre for Policy Alternatives (CCPA) last March, found average market incomes for the richest one per cent in Canada doubled between 1982 and 2018 (the neoliberal era), rising from $308,911 to $615,670 (all measured in 2019 dollars). In that same period, those on the bottom half of the income ladder did not keep up with inflation.

CCPA economists David Macdonald and Alicia Massie, in a paper released this summer, found CEO pay continued to skyrocket during the pandemic, while fellow CCPA economist Alex Hemingway found that, one year into the pandemic, 47 Canadian billionaires had managed to increase their combined wealth by a staggering $78 billion — in a single year!

But as you know, I write about the climate emergency. So why am I so exercised about inequality? And why, as we enter the final days of this election, is it my strong conviction that any convincing climate plan must also be tied to a compelling plan to tackle inequality and enhance tax fairness?

There is a common argument made against linking the need for climate action with inequality and social justice issues, which goes: “Why make this any more complicated? Getting society off fossil fuels is challenging enough. So why make the task even more difficult by requiring our transition plans to rectify the other injustices of the world?” The Green New Deal and other climate justice campaigns frequently encounter this position, often made by climate policy “experts” and even some mainstream environmental organizations.

But these climate policy purists are wrong. The rebuttal is two-fold.

First, these issues are actually deeply intertwined. The higher a person’s income or wealth, the higher their greenhouse gas (GHG) emissions are likely to be. According to an Oxfam report last year, globally, the world’s richest one per cent had double the GHG emissions of the poorest half of humanity. But the same trend is true in Canada, where emissions closely track household income.

But the second reason these issues must be linked is because that’s how we win. It is only by connecting these issues that we mobilize broad popular support. We cannot ask people to separate their fears about the climate crisis from the other affordability anxieties, economic pressures, and systemic crises they face. At a very basic level, inequality undermines trust that “we are all in this together.” Many doubt the task at hand will be undertaken in a fair manner. It is hard to rally the public if many believe the rich are merely buying their way out of making change — fortifying their homes, walling off their communities, or purchasing carbon offsets in the hopes that others will lower their actual emissions. Equally troubling is a cultural narrative that casts climate action as part of an elite project that sees the poor or those currently working in the fossil fuel sector as expendable.

Opinion: As we enter the final days of this election, is it my strong conviction that any convincing climate plan must also be tied to a compelling plan to tackle inequality and enhance tax fairness, writes columnist @SethDKlein. #elxn

My book — A Good War: Mobilizing Canada for the Climate Emergency — explores how Canada can rapidly decarbonize and rise to the climate crisis. But it is structured around mobilization lessons from the Second World War. Among the book’s key wartime lessons is that inequality is toxic to social solidarity and mass mobilization. A successful mobilization requires that people make common causes across class, race, and gender and that the public has confidence sacrifices are being made by the rich as well as middle- and modest-income people.

As the Second World War got underway, one of Prime Minister Mackenzie King’s foremost objectives was to avoid mandatory conscription for overseas military service. This presented the King government with a formidable challenge — how do you convince hundreds of thousands of people to voluntarily enlist, to offer up their lives without duress?

To succeed in such an endeavour, a vital ingredient is social solidarity — a shared belief that everyone is in the fight. People need to feel confident that all are contributing according to their means and making sacrifices in equal measure. And equally important, people need to know the society that emerges after their efforts will be a more just and fair one.

As Second World War mobilization efforts commenced, the governments of Canada, Britain, and the U.S. were all concerned with preventing the type of outrageous war profiteering that had marked the First World War and eroded social solidarity generally, and undermined military recruitment efforts specifically. It would not do to have some people enlisting to fight and die, while others made a killing from a run-up in prices or from lucrative defence contracts. Britain was therefore quick to pass both an Anti-Profiteering Act and an Excess Profits Tax.

Canada did likewise. The profit margin on all government defence contracts was generally fixed at five to 10 per cent — that’s certainly a nice guaranteed margin, but also a cap. And it wasn’t just gouging on government contracts that Parliament sought to limit. In the interests of ensuring solidarity across classes, all profits across the land were capped. Amazingly, under the excess profits tax, for all businesses and corporations in Canada — large and small — the government calculated average profits during the four years prior to the war (1936-39, of note, still Depression years), and this became a business’s maximum annual allowable profit for the duration of the war. All profits in excess of that cap were taxed at a marginal tax rate of 100 per cent.

In 1941, Finance Minister J.L. Ilsley said, “No great fortunes can be accumulated out of wartime profits.” Looking back some 80 years later, this leadership seems hard to imagine. And it stands in stark contrast with the profiteering and wealth accumulation that has stained the months since the COVID pandemic began. It is virtually impossible to conceive of the corporate sector abiding by such brash measures. Yet businesses during the Second World War not only acquiesced to such policies, but some of the country’s leading businessmen actively defended them to their peers. Clearly, there was a sense of common cause in the war that is not in evidence today. Not yet, anyway.

The Second World War also saw the introduction of Canada’s first major universal income security programs. Needing to secure social solidarity across society, the King government instituted unemployment insurance in 1940 and the universal family allowance in 1944. And the famed Marsh Report, which laid out the entire architecture for the modern Canadian social welfare system, was written during the war and offered up to Canadians as a pledge that the society that would emerge from the war would be more equitable and just than the one they were leaving behind. That’s when the mobilization and recruitment took off.

The point in recalling all this — as we face today’s threat and the need for mobilization — is to appreciate that effective mobilization isn’t merely about building more planes and tanks, or today, wind turbines and solar panels. It requires policies that fulfil a promise that we will better look after one another, offer good jobs and income supports to all, and people will be treated with dignity and fairness. When you’re asking people to share in a great undertaking, that’s how you keep everyone on the bus.

Polls show the public appeal of tackling climate and inequality together

For years now, various public opinion polls have highlighted a paradox: respondents indicate high levels of concern regarding climate and strong support for policies that would reduce GHG emissions, yet low levels of willingness to personally pay for climate action.

But there is no great mystery to this mixed response. In polling I commissioned for my book from Abacus Data in the summer of 2019, affordability was named as the top concern of Canadians, just ahead of climate change. That only stands to reason; it is a more immediate concern to most people (even before the pandemic). Hence, the powerful need to link these issues.

When we do so, the appeal is dramatic, far surpassing the levels of support for any one political party. As the Abacus poll revealed, when Canadians were given a short definition of the Green New Deal — describing it as an ambitious vision for tackling the twin crises of climate change and inequality — it proved immensely popular, supported by 72 per cent of Canadians surveyed.

Another key finding from the Abacus poll: the more a bold and transformative climate plan is seen as linked to an ambitious plan to tackle inequality, economic insecurity, poverty, and job creation, the more likely people are to support it. The poll listed five policy actions that could help with the transition, including extending income and employment supports to those more vulnerable during the transition, and increasing taxes on the wealthy and corporations to help pay for the transition, and asked people if such policies would make them more or less supportive of bold and ambitious climate actions. Those five policy options and the responses are shown below. 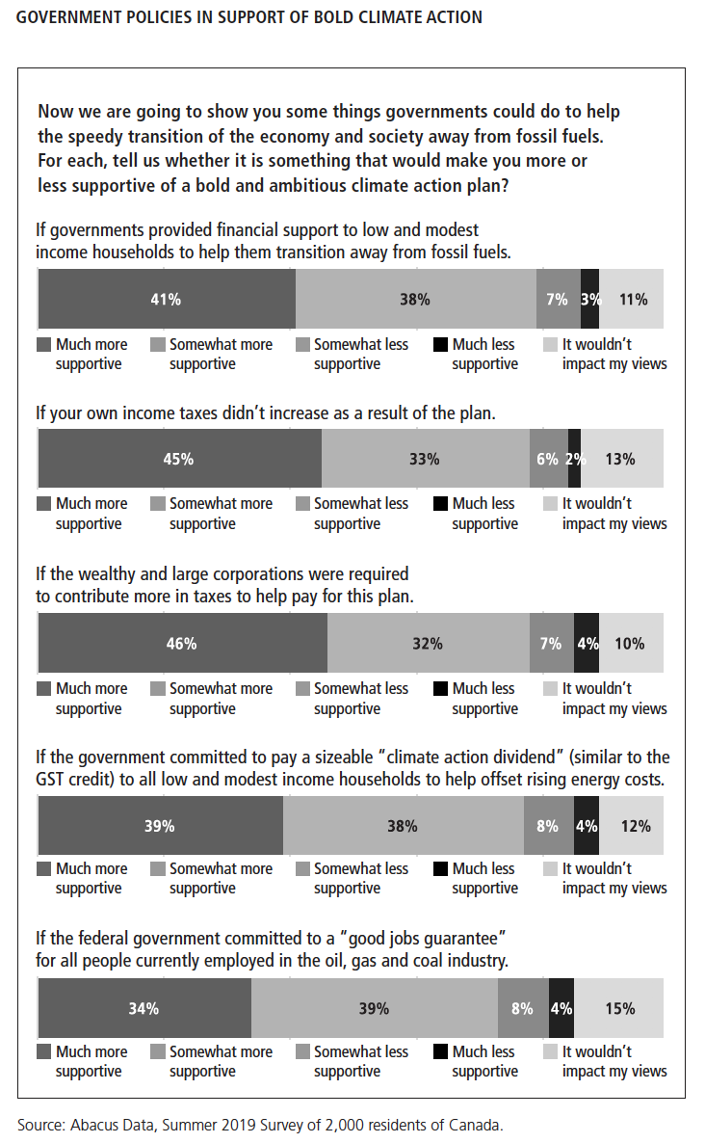 The takeaway from these results is clear: when ambitious climate action is linked to tackling inequality and job insecurity, support does not go down — rather, it goes dramatically up.

That’s why populist platform ideas like the NDP’s proposed wealth tax, corporate tax increases, and a pandemic profiteering tax should not be seen as separate from the party’s climate platform — they are central to how we both pay for and win support for bold climate policies.

Inequality is not only a moral problem — it is a practical barrier in getting to carbon-zero. Runaway wealth is associated with runaway emissions, while poverty and inequality will be exacerbated by climate policy unless this reality is explicitly recognized and tackling inequality is built into the design of climate action measures. High levels of inequality undermine social cohesion and promote social divisions, rather than building the social and political trust needed to chart a future based on a sense of shared fate. The more a robust climate action plan is linked to an exciting plan to tackle poverty and inequality, along with a hopeful and convincing jobs plan, the more we maximize public support. Plus, it’s the right thing to do.