Three movies — two with aging stars, and one about an old televangelist scandal 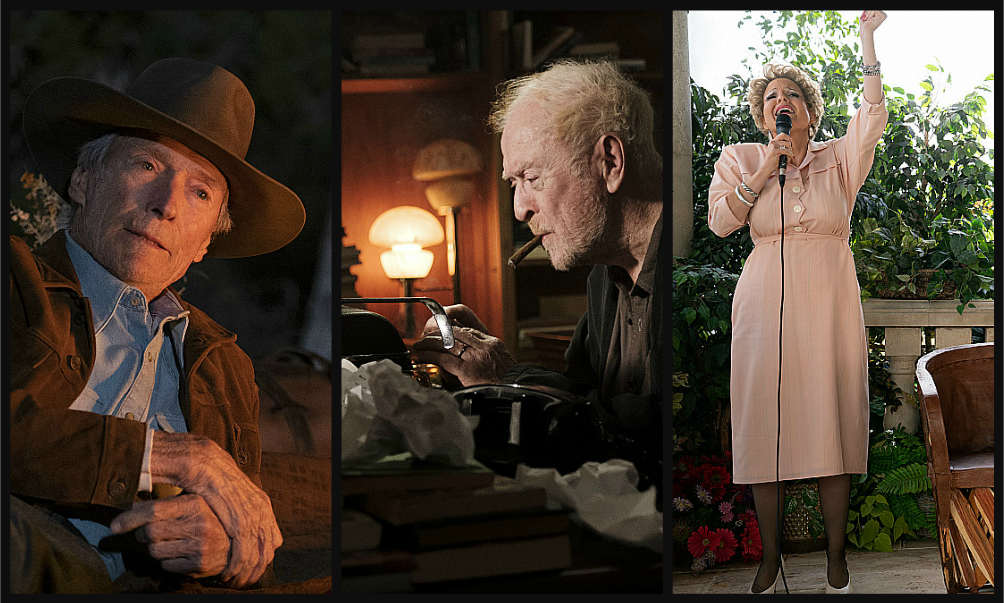 The movies look back this week — first through the latest efforts of two iconic but very old actors, and then with the dramatized life of a couple of religious hucksters who used to be big on TV. A couple of contemporary subjects and a dark future fiction fill out the list.

The Eyes of Tammy Faye: 3

CRY MACHO: Clint Eastwood is still worth watching even though he's 91 years old, acting and directing himself in a role fit for a much younger man. He's still got that flinty-eyed charisma that can attract. Here, he's a former rodeo rider whose career ended with a back injury. He gets a new chance at life when a former boss (singer/actor Dwight Yoakam) hires him to go find his son in Mexico and bring him back. The motivations aren't as originally stated, we learn that much later, but Clint's character's progress is highly involving. That's so, even if you've seen stories like this moody modern-day western before.

Clint finds the boy (newcomer Eduardo Minett), but in strange circumstances. He lives in a luxurious mansion with a sexy mother and thugs as bodyguards. He has escaped, and is now a street kid prone to stealing and illegal cockfights, and that's where he enters his rooster, Macho. He's delighted to hear that his father loves him and wants him back and agrees to be taken back. The thugs don't want him to go, though, and chase after them. A few stolen cars, chats to get to know each other while driving, and soulful encounters with people in small towns along the way ensue. The longest is with a woman who runs a cafe, recognizes their plight, and stands up to a corrupt local cop who gets in the way. You can see where it's going because, except for a late plot twist, there's not much new here. But it's comfortable, at a relaxed pace, and in a good mood. (International Village, 5th Avenue, Marine Gateway, and suburban theatres.) 3½ out of 5

BEST SELLERS: Michael Caine and Aubrey Plaza, old and young, square off and try to abide by each other in this Canadian film that feels like a bit of a muddle. For us, the stars are the chief attraction, while the film tries to tackle many themes and connects with few. The publishing industry, for instance. It has been abandoned by young readers, the script says, unless it makes a splash on social media. Maybe true, but like this?

Plaza has inherited a company from her father, published a number of young adult duds, and seeks out an author (Caine) who had a hit book 50 years ago and is still under contract. He's cranky, unco-operative, “hates everybody,” and after hitting a critic on a promo tour, is banned from bookstores. Only bars will take him and, remarkably, hipsters turn out. They respond to his antics, chanting along with him as he recites one word over and over and urinates on his book. He's famous on YouTube and his book sells. The bigger themes eventually rise as Caine and Plaza tackle aging, revival, and respect between generations, and what made the author such a curmudgeon. That explanation isn't satisfying. Nor is a sidebar story with a potential buyer of the company and brief love interest (Scott Speedman). The two leads are worth watching, though, as they scrap and learn. Both director Lina Roessler and writer Anthony Grieco have acting in their backgrounds. (Rio Theatre; also Toronto, Montreal, and several VOD platforms.) 2½ out of 5

THE EYES OF TAMMY FAYE: Do many remember her and the evangelical TV show she and hubby Jim Bakker hosted years ago? Even with the much-reported scandal that befell it? Or this. Why bring it up again now? Maybe there's a hint of irony. This world has a lot of Trump supporters in it and political influence. Even then, politics is hardly mentioned (except for a clip of Reagan praising the Bakkers' PTL Club). This is the personal story of their rise and fall.

As a child, she's attracted and guilted by the original-sin folks and by her parents. As a young woman, she turns to the more practical theology of Jim, a Bible college student who believes God wants you to thrive, not to be poor. With that, they built their ministry, which eventually grew into the fourth-largest TV network in the U.S., and was distributed by satellite.

Jessica Chastain is perfect as the effervescent Tammy Faye, with her garish makeup and supreme confidence. Andrew Garfield captures the ingratiating Jim, and often looks like him. They work well as the couple, on-screen at least. In real life, they didn't stay close, wandered romantically, and took for themselves a big part of the money they were raising for schools, the underprivileged, and God's work. The film is thin about that fraud, but very informative about the rest of their story. It's cautionary history, directed by Michael Showalter, following his well-regarded films The Big Sick and The Lovebirds. (5th Avenue, International Village, and three suburban theatres.) 3 out of 5

LITTLE GIRL: There's drama and information in this documentary about transgender kids and the anguish their parents feel. It's a Danish-French co-production, but the family we visit is clearly in France. Eight-year-old Sasha was born a boy, but insists she's a girl. A therapist calls it “gender dysphoria.” An earlier term, “identity disorder,” is no longer acceptable because it's not a disorder.

Sasha doesn't have friends over to play. She looks like an outsider at ballet class. She says kids at school accept her, but her teacher is mean. The principal won't return her mother's calls, not even when she gets a medical certificate asking for special accommodation. The mother has guilty feelings. Did she cause it? The therapist assures her she did not, but can't say what does. There are also decisions to be made about therapy that could block puberty. It's highly emotional and there are brief scenes of the mother or daughter weeping. But the film is more about practical issues: the difficulties it brings to their lives. It doesn't tell us how common it is, or even if it is more frequent these days now that it is talked about. And why the mother allowed the cameras in for such an intimate subject is also not addressed. It'll make you think and empathize, though. (Vancity.) 3½ out of 5

BLUE BAYOU: This film made me aware of a quirk in American immigration policy, and that easily overcomes its dramatic faults. It's particularly relevant considering how many people adopt orphans from overseas. There's extra paperwork those parents have to do to make sure the child is considered a valid immigrant. If not, the child could be deported, even as an adult. That's what faces a Korean-American man who has lived in Louisiana for 33 years.

Antonio (played by the director, Justin Chon) has a spotty history as a motorcycle thief and is threatened with deportation when that's found out. He's married to Kathy (Alicia Vikander, putting on a perfect Southern accent). She has a daughter from a previous relationship and her ex (Canadian actor Mark O'Brien) wants to see his daughter again. The scene is set for the immigration drama. A confrontation in a grocery store caused by the cop's racist partner initiates it. ICE (Immigration and Customs Enforcement, as it's known) takes over and a lawyer explains how little the couple can do about it. There's a frantic search for some paperwork, a picnic where Alicia sings the title song (with lyrics perfectly reflecting the film's theme), and plenty of reasons to feel tears coming on. Not gentle like that other immigrant story Minari, this is a strong protest, obvious but moving. (Cineplex theatres, 5th Avenue, Coquitlam, and Langley.) 3 out of 5

ZONE 414: This is a creepy bit of science fiction that shows more than a little influence from the far better Blade Runner. The zone is a vacation colony dubbed “City of Robots” because it is staffed by androids. They'll meet all your requirements and wishes, salacious or not, as we find out along the way. The way happens to be a search by a private investigator (Guy Pearce) hired by the colony's inventor to find his daughter who has gone there to defy him.

Pearce teams up with one android (played by Matilda Anna Ingrid Lutz) who is so human-like that she can show emotion. She dreams of getting out because her boss is mean and possibly a psycho and there's a stalker bothering her. Guests at this vacation spot can indulge in that kind of perverse activity. Interesting ideas these but not well- or even vibrantly told. The film drags. It's a first feature by director Andrew Baird, whose previous efforts have been music videos — including a celebrated one for The Weeknd that got him invited to make a movie. This one has a gloomy view of humanity. (Streaming to rent or buy from many sites, including Cineplex, Amazon Video, and Apple iTunes.) 2 out of 5