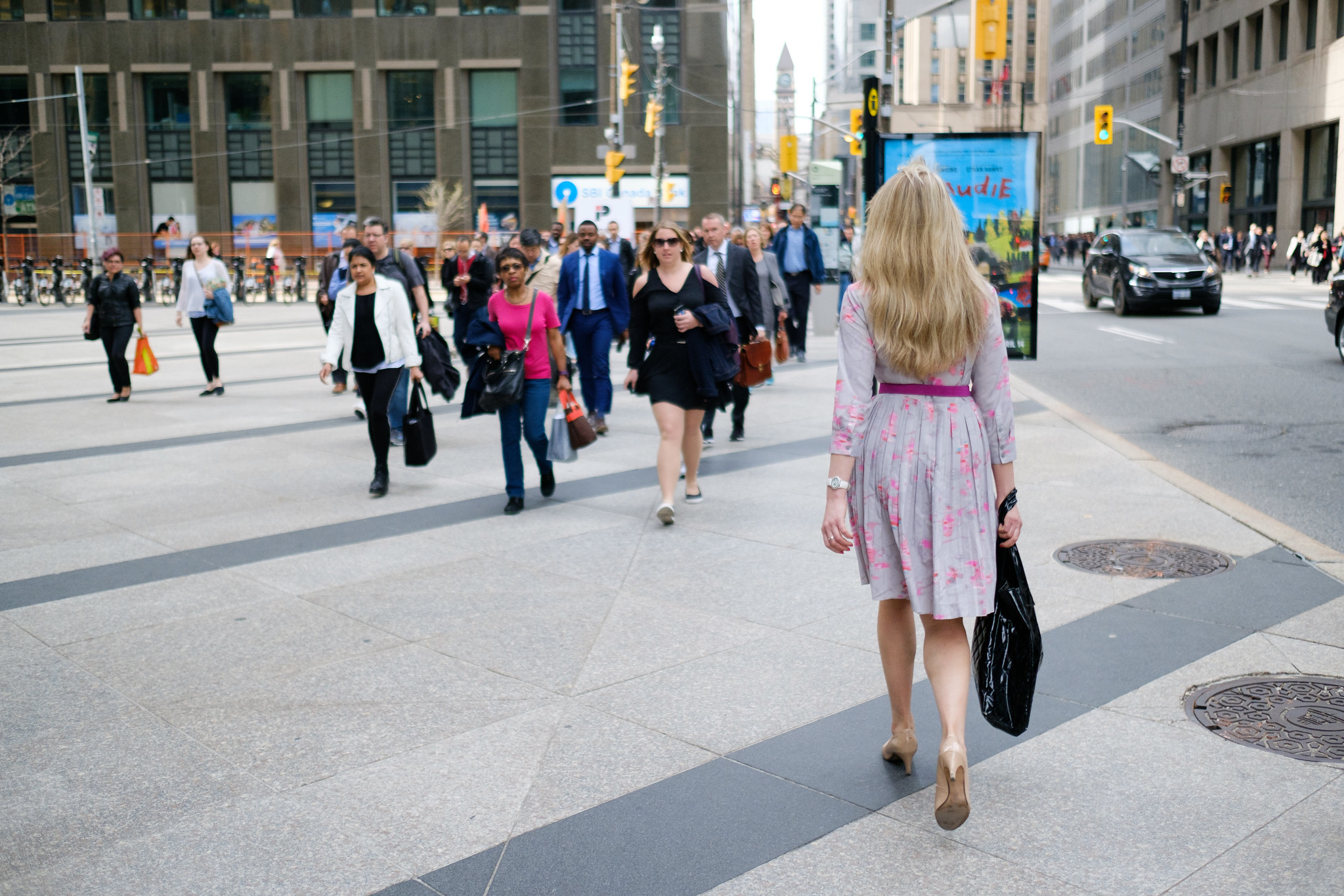 In the nine leadership races that have been run by the NDP, Liberals, and Conservatives in the 21st century, not a single one has elected a woman, writes columnist Max Fawcett. Photo by Sebastiaan ter Burg / Flickr (CC BY 2.0)
Previous story

With just a few days to go before we find out who forms Canada’s next government, it looks increasingly likely that we’ll end up right back where we started.

Sure, it’s possible Erin O’Toole’s Conservatives will end up with a plurality of seats, and Justin Trudeau’s Liberals could theoretically eke out the majority they wanted. But the safe bet is that we end up with another Liberal minority government supported by the NDP. The only difference will be the half a billion dollars Canadians spent on this election, and the opportunity it provided for the People’s Party of Canada to suddenly become relevant.

If it’s status quo in terms of the composition of Parliament, though, it shouldn’t be when it comes to who’s leading those caucuses. The fact that neither of the two major parties have been able to come close to 40 per cent of the popular vote in the last two elections speaks to the increasingly fractured and fragmented nature of Canadian politics. More importantly, it calls for an important change: more women at the top.

In the nine leadership races that have been run by the NDP, Liberals, and Conservatives in the 21st century, not a single one has elected a woman. None of them have really come close, either. Sheila Copps finished second to Paul Martin in 2003, but that was mostly because every other candidate bowed out in the face of his juggernaut of a campaign (case in point: she got 6.1 per cent of the vote).

In the race that selected Trudeau a decade later it was again a woman finishing in distant second, with Joyce Murray getting 11.8 per cent of the vote. And in the 2017 NDP leadership contest, Niki Ashton wound up in third place. The best performance in the three major parties might be that of Leslyn Lewis, who received 20.5 per cent of the first-ballot votes at the 2020 convention that ended up anointing O’Toole as leader.

If we want the next federal election to be better than this one, we should hope all three parties improve on these outcomes.

Chrystia Freeland’s standing in the Liberal Party, and with Canadians, would seem to make her the obvious front-runner for Trudeau’s job. And while there are other potential candidates out there, including former Bank of Canada governor Mark Carney, Trudeau should move heaven and earth to ensure that Freeland is his successor. Never mind the fact that she’s so clearly earned it with her work on the pandemic, the trade war with Donald Trump, and any number of other key files. If Trudeau wants to be remembered as a feminist leader, handing the reins to the most successful female politician in Canada is a move he needs to make.

There are no equally obvious successors in the NDP and Conservative Party of Canada, although people like Leah Gazan, Megan Leslie, Laurel Collins, Michelle Rempel-Garner, Lisa Raitt, and Christy Clark can all make credible cases for their respective thrones.

But the impact of having more women in Canadian politics, and especially in leadership roles, is obvious. In a July 2020 report, the Westminster Foundation for Democracy (WFD) and the Global Institute for Women’s Leadership at King’s College London showed just how important it is to have more women in positions of political power and authority.

Their findings, which draw on more than 500 pieces of research, suggest the benefits range from reduced inequality and improved access to social services to a more collaborative and inclusive leadership culture and even better constituency outreach. “When women are able to exercise political leadership in a manner that is authentic to them,” King’s College’s Rosie Campbell and the WFD’s Shannon O’Connell write, “there are gains not just for women and girls but for the whole of society.”

Opinion: If there has to be another election in the next few years, let’s hope it’s one that’s defined by some new faces — and new voices, writes columnist @maxfawcett. #cdnpoli #elxn44

Canadians have shown themselves more than willing to elect women to the highest office at the provincial level. Back in 2013, the premiers of six different provinces or territories, including Ontario and Quebec, were all women, and their success helped increase the number of women who ran for office. But as University of Alberta political science professor Linda Trimble told the late Anne Kingston in 2019, that success hasn’t been replicated at the federal level. “That no woman has been in serious contention to lead a party that has formed government since (Kim) Campbell won the PC leadership in 1993 indicates the extent to which these organizations are old boys’ clubs.”

If we want to avoid a repeat of this election and this campaign, those organizations have to change. That has to start with fielding a properly diverse set of candidates, which is a bar that only one of the three major parties (the NDP) managed to clear this time around. The Conservative Party of Canada, which ran a field of candidates that’s two-thirds men, has the most work to do here.

But all of them need to find ways to better elevate and support female leaders in their midst, and ensure the clubs they’re running aren’t still dominated by those old boys.

If there has to be another election in the next few years, let’s hope it’s one that’s defined by some new faces — and new voices.

What was the name of the

What was the name of the recent study that found 1/3 of the population, namely while men, were nominated more often, more often given the safe seats to contend, usually the recipients of larger campaign funds, etc. etc.??? What I liked best about the news coverage was the percentage of the general population that these most privileged candidates comprise. One third of the electorate is made up of white men.

So really, we're being governed by an oligarchy if sorts....a racialized and gendered minority.

It shouldn't be that hard to fix the problem.......but the financial power this minority wields means they'll fight hard to maintain their advantage. One might even wonder if that isn't part of the fear of change galvanizing that freedom loving, anti vaccination mob marching around in circles just now.

It's hard to accept that your advantages have been rigged.....especially when they seem to be slipping away.

The antagonism of FPTP

The antagonism of FPTP politics is a disservice to the cause of electing a more diverse government. We need to push concertedly for electoral reform, or we'll never see a type of politics that hinges more on collaborative leadership skills, versus pugilistic. I hope despite the poor judgment of calling a needless election at this time that Mr Trudeau will not have doomed us to a Conservative led government, which will move us further away from where we need to go on environment and on so many other issues of communal concern. But Mr Trudeau is an enormous disappointment on electoral reform. I actually believed he was confident and ethical enough to bring forward proportional representation, when he had the chance, and it turned out he's just another craven and dishonest man, afraid of sharing power and ideas with other people, particularly women, minorities, and those less blessed by fortune than himself. He's marginally more ethical than the Conservative candidate, at least, but really has shown himself to be no more concerned for the vast majority of his fellow citizens than most of his main opposition. He is no progressive, at heart, and will only do what's right if pushed into it, sadly. I hope he regains power but with a diminished seat count, and has to truly bring in measures that serve more people broadly, rather than only serve his party's narrow interests.

He ran on electoral reform

He ran on electoral reform and he got a majority mandate. He could have just went ahead and made the change or struck a commission as Gordon Campbell once did, and then just gone with their recommendation.

Instead what ensued seemed either inept, or machievellian.