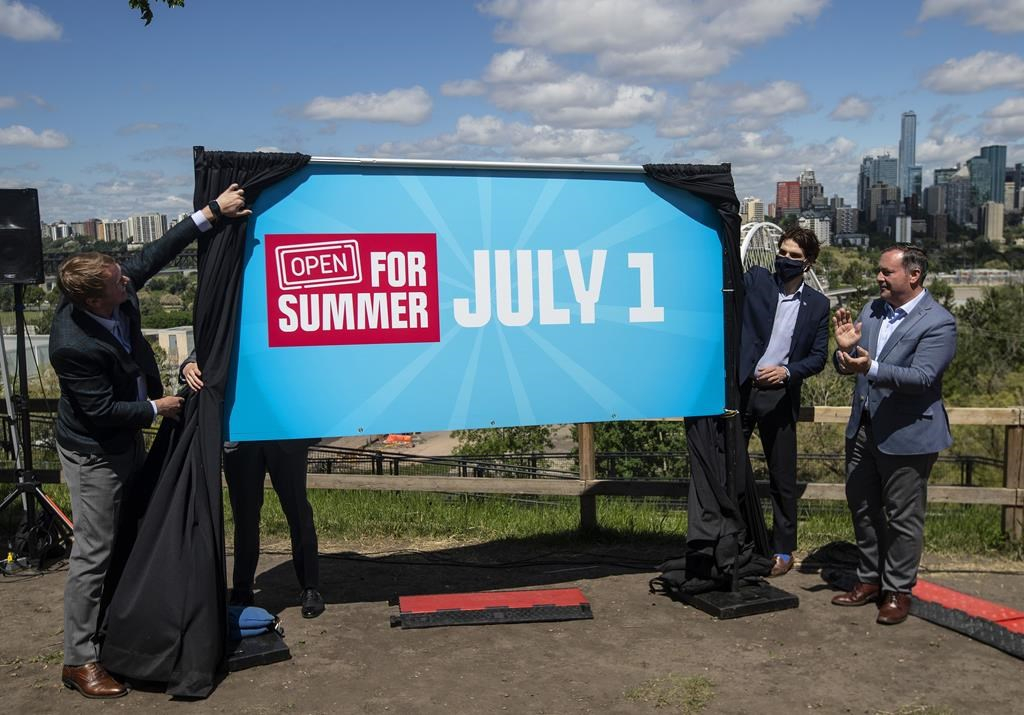 Alberta Health Minister Tyler Shandro and Alberta Premier Jason Kenney unveil an opening sign after speaking about the Open for Summer Plan and next steps in the COVID-19 vaccine rollout, in Edmonton on June 18, 2021. THE CANADIAN PRESS/Jason Franson
Previous story
Next story

EDMONTON — Alberta Premier Jason Kenney fought Tuesday to contain a rapidly expanding COVID-19 crisis that has overrun hospitals and ignited a party revolt against his leadership.

Kenney’s government also reached out to the federal government for emergency help with COVID-19 hospitalizations that may soon force doctors to ration life-saving resources.

"Federal assistance in these two areas has the potential to create significant relief to the health-care system," McIver wrote in a letter to Bill Blair, federal minister of public safety and emergency preparedness.

Blair responded on social media: “Federal officials have been engaging their counterparts in Alberta for the past week to offer help. I have made it clear that when a request is received, it will be approved. We will work together to provide for the people across Alberta.”

Last week, Alberta asked other provinces for help when it declared a state of public health emergency. At that time, Kenney reintroduced gathering restrictions and announced a form of vaccine passport.

Alberta has more than 20,000 active cases. On Monday, there were 954 COVID-19 patients in hospital and 216 of them were in intensive care, well over normal ICU capacity.

Many surgeries have been cancelled and Kenney estimated last week that hospitals could be overwhelmed by the end of the month without direct action.

The premier is facing not only public but internal backlash from the United Conservative rank and file as well as from caucus members over his handling of the pandemic.

Joel Mullan, the party's vice-president of policy, said Kenney needs to step down or face a fast-tracked review of his leadership.

“(A resignation) is necessary because both party members and the public have lost faith in Jason Kenney’s leadership,” said Mullan.

He said Kenney has failed by constantly making extreme, inflexible policy decisions on COVID-19, only to retreat when the shifting, mutable crisis has forced his hand.

In the latest retreat, Kenney introduced proof of vaccination requirements after proclaiming for weeks he would never do so.

“We paint ourselves into a corner where there’s no other option but to turn yourself into a liar to get out of it,” said Mullan. “This is a highly fluid situation with a virus we don’t have a firm understanding of yet.

“There’s no management of public expectations. Instead it’s just telling people, ‘Nope, this is how it’s going to be’ until it isn’t. It’s no wonder that people don’t trust him anymore.”

Kenney is not facing a party leadership review until late next year, unless at least 22 United Conservative constituencies vote to hold one earlier.

Mullan said more than 30 constituency associations have said they intend to call for a review but most have yet to formally ratify their decisions.

“I don’t know exactly when it will be done, but it seems to be moving quite quickly.”

Mullan said if a leadership review were to be called, it would take place within two to three months. Kenny would need a simple majority of votes by the membership to keep his job.

Last week, Dr. Deena Hinshaw, Alberta's chief medical officer of health, admitted the fuse on the explosive fourth wave was lit on July 1, when Kenney lifted almost all health restrictions, faster than any other province. He said it was safe to do so, because 70 per cent of eligible Albertans had received at least one dose of vaccine.

Kenney declared COVID-19 was effectively defeated and that a future rise in cases could be accommodated in the health system. He said he didn't envision needing a fallback.

After that, vaccination numbers effectively stalled and fell behind other provinces. That prompted Kenney to recently offer $100 to anyone getting a first or second shot.

His government failed to act during July and August as case numbers spiralled and Kenney went on vacation.

Last week, he said he didn’t act earlier because he didn’t believe Albertans would have followed renewed health restrictions.

I fantasize that kkkenney and

I fantasize that kkkenney and hinshaw will receive sanction commensurate with the harm they've caused , like in Dante's Inferno. so picture them strapped to gurneys for three days and nights in an Edmonton hospital covid ward, paediatric if possible, forced to see and hear everything going on there , no mask of course since we know it's just a flu and syphillus is much more rampant....
criminal non governance deserves some consequence, in my fantasy world anyway