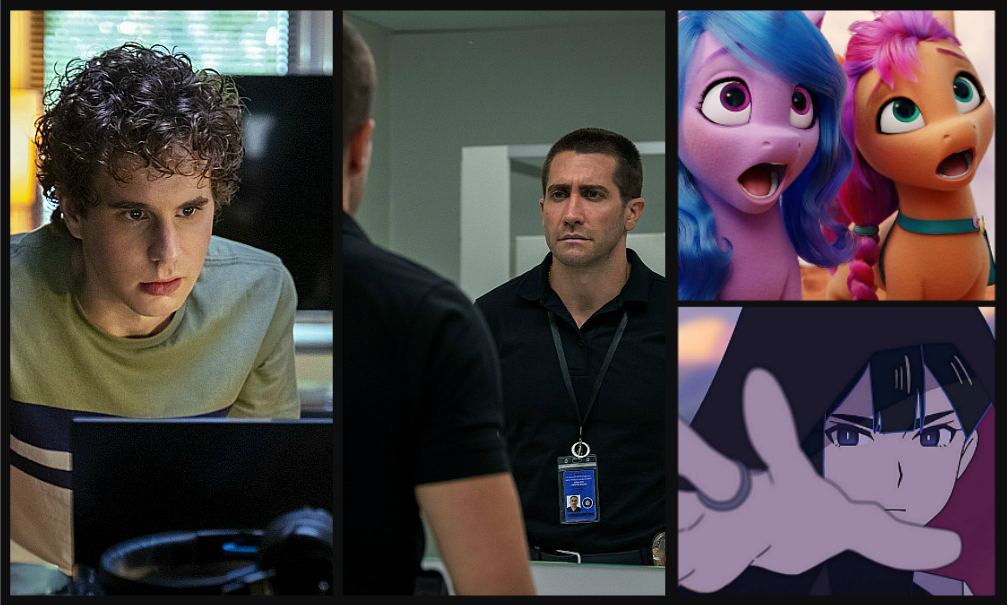 Also: a quantum-theory love story, a police station shootup, and Melisa versus a starling.
Previous story

It's a busy week for new films and about to get busier. VIFF is only a week away. Tickets are on sale and the guidebook is now out. You can find it at various JJ Bean coffee shops.

Meanwhile, VIFF's Vancity Theatre has a special event Sunday, a screening of Last Paddle? 1000 Rivers, 1 Life. That's a documentary with Mark Angelo about his lifelong campaign to save rivers. Sometimes to revive them. He's the catalyst for both Rivers Day in British Columbia, where he lives, and World Rivers Day. The film shows him visiting and talking about several around the world, the Zambezi, the Yarra, the Thames, the Fraser, and many that are lesser-known. He'll also be at the screening to talk, but tickets are now standby only. I hope there'll be more showings.

Here's what else is new this week.

DEAR EVAN HANSEN: I read that the studio is close to panicking because its sure-thing musical, adapted from a big award-winning Broadway hit, got weak reviews when it opened the Toronto Film Festival. “Savaged,” says one report, although it looks like “mixed” would be better because there were just as many good reviews. I'll put myself right in the middle. This is a perfectly pleasant musical that deals with real issues but doesn't reach an emotional peak. The songs are not memorable, except for the rousing You Will be Found and a new one added for the film, The Anonymous Ones. They, and others, bluntly expound the story's themes: insecurity, shyness, feeling you're an outsider, or the wish “that anything I said mattered to anyone.” The film depicts those feelings perfectly well. When Evan (Ben Platt) walks into his high school, nobody even looks at him.

On a therapist's advice, he writes letters to himself, and when one is grabbed by another outsider and ends up on an Instagram post, the story kicks up. Too fast, actually. Evan becomes a celebrity. The outsider kills himself, (no reason given), is deemed to have written the note, and therefore is seen to have been Evan's only friend. Evan can't bring himself to tell the truth, pretends he really was friends with the guy, and thereby cheers up his parents (Amy Adams as the mom) and even his own mother (Julianne Moore), and wins over the guy's sister and her doubts. The deception won't last, of course, and the film does a good job showing the turnabout.

Some critics thought Platt, age 27, was wrong to play a teenager. I think he looks right, not one of the cool kids. And he can sing. He originated the part on Broadway, has sung it hundreds of times, and won a Tony as best actor. (The Park, Scotiabank, Marine Gateway, and many suburban theatres.) 3 out of 5

THE GUILTY: This is a very good remake of an excellent Danish film from three years ago that was hardly seen here — one screening in Vancouver — and was an official submission to the Oscars. As so rarely happens though, it captures the qualities that made the original special: powerful storytelling, suspense, and almost all the intensity. All that and it takes place in just one location, with one character on the screen every minute (another is seen briefly), and everyone else on the phone.

It's in a 911 call centre in Los Angeles. Jake Gyllenhaal plays a cop who has been demoted there because he's facing trial for a shooting. He gets a call from a woman who says she has been abducted and in a van being driven by her estranged husband. Jake has to figure out where, what direction, what van, and more. The highway patrol can't help and a dispatcher is particularly annoying. We watch him use what little info he has to find where she lives, call there and hear an abandoned daughter and an injured toddler. His performance is remarkable, showing urgency and, when denied help, frustration. And most remarkably, everything we learn early about the case turns out to be wrong. It's a riveting film, directed by suspense-specialist Antoine Fuqua and with Gustav Möller, who wrote and directed the original, as one of the producers. (International Village, Langley, Surrey, Victoria, and Kelowna. Soon on Netflix) 4 out of 5

MY LITTLE PONY: A NEW GENERATION: My granddaughter Julia, age 4½, helped me with this one. She declared it better than Paw Patrol. She especially liked the “adventure” in it, and that word pretty well sums it up. There's lots of it. All the nice stuff you'd expect about the “power of our friendship” is at the beginning, but then there's a long quest. It seems that harmony is lost in Equestria. Earth Ponies, Unicorns, and Pegasi are no longer friends. They're scared of each other, and you should hear what the others say about the Ponies.

Sunny, a young Earth Pony, wants to restore the “magic.” She rejects the cynical view that harmony is “just a phoney bedtime story made up by your dad.” Izzy, a young unicorn, joins her on a trip to find two crystals (three, eventually) that have come apart and must be rejoined. It comes to feel like a Marvel movie in that respect and does culminate in a huge battle scene with a racist deputy sheriff driving a giant war machine. And there's a marching army of fascist soldiers. There are gags like this.

And did you know these little ponies have smartphones? That's for the hipster audience that we've heard about, but there's action and good vibes for the kids. Name actors including Vanessa Hudgens, James Marsden, Elizabeth Perkins, Michael McKean, and Ken Jeong provide the voices. (Netflix.) 3½ out of 5

STAR WARS: VISIONS: Disney has found another way to spin out the Star Wars saga with these nine shorts produced by Japanese animation studios. The artwork is beautiful and in different styles, as per the studio that created it. Some are hyper-realistic; at least one has a woodsy look as in a classic children's book. The spaceships look exactly like in the movies and float against a star-studded universe.

The stories don't add much that's new. They feel like sidebars, about things that may have been going on elsewhere in the galaxy. Two are about reclaiming a lost technology, the lightsaber. Three have women taking a lead in battles with them, and there are environmental messages in some. A mountain collapsing reminds us of when people had respect for this planet. Another story worries about “dark energy” that can destroy a planet. The twins, in the story called that, drift apart to the opposite sides of The Force. In Tatooine Rhapsody, a heavy metal band is captured by Jabba the Hutt's agents. And so it goes. Henry Golding, George Takai, and Lorraine Toussaint are among the voice actors. The episodes are 14 to 22 minutes long, that's almost 2½ hours, and are best watched a few at a time. (Disney+.) 3 out of 5

BETWEEN WAVES: Here's a film that's so nicely mysterious that you'll forget much of it is impossible and just flow with the moody speculation. It's Canadian, a debut by director and co-writer Virginia Abramovich, and spins the arcane world of quantum physics into a metaphor (I think) about lost love. That's my fact-based interpretation of it anyway.

Fiona Graham plays a Toronto woman whose boyfriend (Luke Robinson) disappears. He's a quantum physicist who, in a lecture early on, had talked about a new theory he had developed about masses being able to exist in two universes at the same time. Police find his body, but is he in a parallel world somewhere? She thinks she sees him telling her he's alive. She catches sight of him periodically, both in her city and over on an island in the Azores, which she visits because that's what they had planned. A local bar owner is also feeling a loss, his daughter disappeared in the ocean, and he is waiting for her return. Water, we're told, is the “conduit” to cross over into another dimension. With a brisk pace and well-placed flashbacks, the film spins an intriguing fantasy. (Now available on Apple TV, Bell, Cineplex, Google Play, Rogers, Shaw, Telus, etc.) 3½ out of 5

COPSHOP: Gerard Butler makes odd choices in picking movies to be in. They tend to be nonsensical action films like Olympus Has Fallen and this one is no better, but curiously, it's a lot of fun. That's because it's so over the top after starting with a good idea. He plays a hitman sent to wipe out a guy (Frank Grillo) who has stolen from the mob. That guy finds the perfect place to hide: he gets himself arrested and sits in a small-town jail. So what does Gerard do? He gets tossed in there too after sideswiping a police car. The two are in cells that face each other and spout manly invectives at each other.

They're not alone, though. There's a crooked cop, taking orders from somebody on the phone, killing other cops. There's a rookie policewoman (Alexis Louder), a survivor who is good with a gun. Then another hitman, who arrives spouting menace and shooting wildly. He's more than unhinged and played with outrageous gusto by Toby Huss. The police station turns chaotic in a long gun battle. Does nobody outside hear anything? You don't ask questions like that. You just marvel. (International Village, Marine Gateway, and suburban theatres.) 2½ out of 5

THE STARLING: Watch out for the diving metaphors. They're out in force in this ludicrous tale of grief and fightback against it. It's glossy and colourful, and stars Melissa McCarthy with backup from Chris O'Dowd and Kevin Kline, and therefore does provide some entertainment. It can't overcome its faults, though.

Melissa and Chris play a couple whose daughter has died of sudden infant death syndrome (SIDS). They react differently. He's in a mental facility. She's at home and starting a garden. A starling moves into her tree and periodically dives at her head. Later, she'll wear a football helmet, but first, she has to get stitched up and Kevin is recommended. His name is Dr. Larry Fine (cue the Three Stooges joke) and he has quit human medicine and is now a veterinarian. That's the kind of humour you'll find here, plus sentimentality and facile talk about recovery and facing up to your loss. Emotions find their way out, we hear, and “worst of all, we turn on ourselves.” Theodore Melfi, better known for Hidden Figures, directed. (Netflix.) 2 out of 5