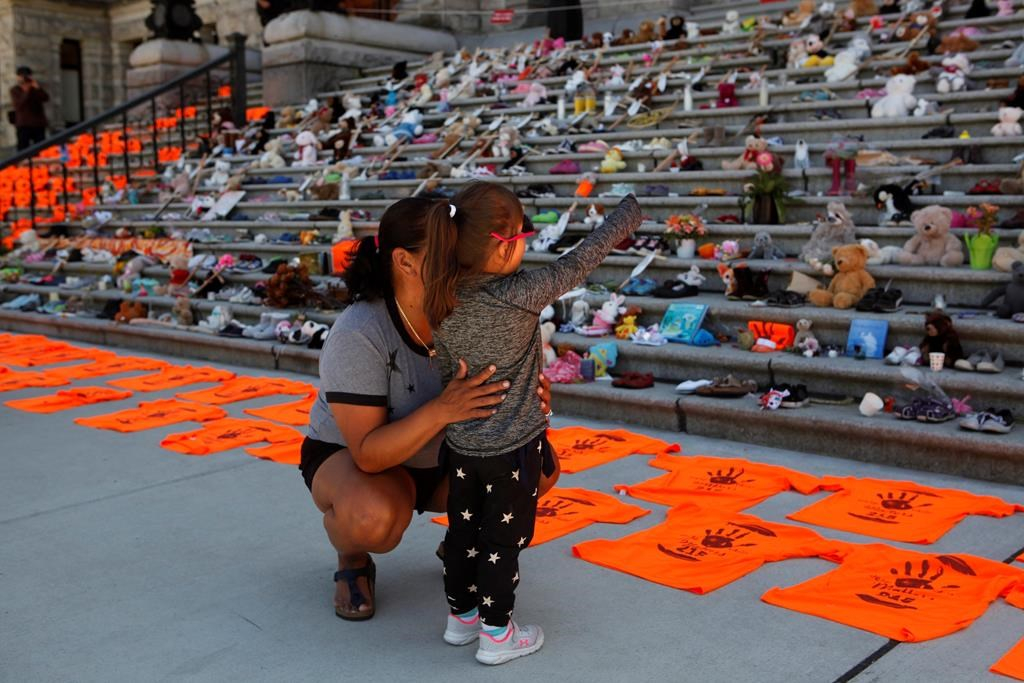 Emmy Morris and her daughter Sharon Morris-Jones, 4, of the Tsartlip First Nation, look at orange shirts, shoes, flowers and messages on display on the steps of the legislature in Victoria on June 8, 2021. File photo by The Canadian Press/Chad Hipolito
Previous story
Next story

Canada's first National Day for Truth and Reconciliation is taking place Thursday and communities across the country are preparing to mark the day with virtual and in-person events. Not all provinces and territories are officially observing the federal statutory holiday announced in June, but many schools, businesses and different levels of government are recognizing it. Here are some examples of some events taking place:

— A prime-time special in honour of residential school survivors is to air on APTN and CBC/Radio-Canada.

— The Tk'emlups te Secwepemc Nation in British Columbia is urging the Secwepemc Honour Song be taught in schools, workplaces and at home. The First Nation posted a video to help people learn the song and is suggesting people sing and drum at 2:15 p.m. PT.

— A ceremony at Fort Calgary will include remarks from Calgary Mayor Naheed Nenshi, a Siksika elder, an Indigenous Canadian Army veteran, as well as presentations on intergenerational trauma. The event will close with drumming and dancing, and be livestreamed on calgary.ca/live.

— Organizers are encouraging the public to join a walk-through exhibition at Hardy Park in Brockville, Ont., to learn about the Truth and Reconciliation Commission's 94 calls to action.

—An outdoor concert called the Unity Jam is to take place at Dufferin Grove Park in Toronto. The show will feature performances by Indigenous singer-songwriters Derek Miller and Logan Staats, and Layla Black, a fourth generation residential school survivor and multidisciplinary artist specializing in digital media.

— Teachings will be shared in honour of survivors and those who did not return home from residential schools at a sacred fire in Memorial Park in Winnipeg from Monday to Wednesday.

— The Mi'kmaw Native Friendship Centre is holding a "Weekend of Reconciliation on the Waterfront" at the Sands at Salter urban beach area in Halifax from Thursday to Oct. 2. The weekend is to include crafts, a traditional salmon dinner and live entertainment.

—The National Centre for Truth and Reconciliation is putting on a series of virtual events beginning Monday. Topics are to include treaties, land claims and unceded territories, language and culture, and truth and reconciliation. Videos can be seen on the website nctr.ca.