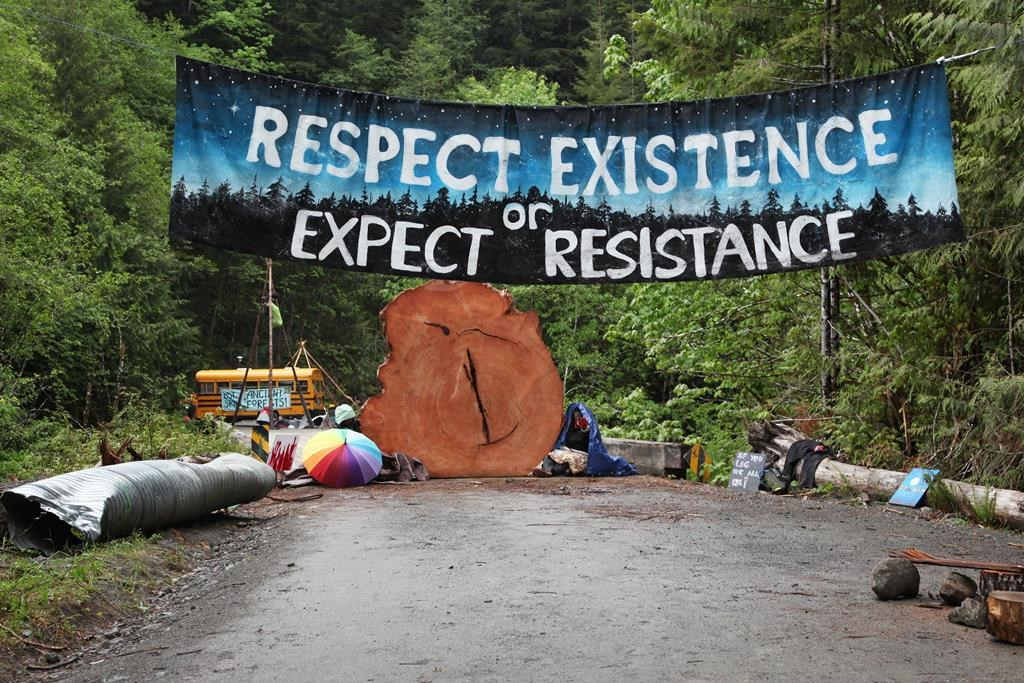 Protesters sit chained to a tree stump at an anti-old-growth-logging blockade in Caycuse, B.C. on Tuesday, May 18, 2021. THE CANADIAN PRESS/Jen Osborne
Previous story
Next story

VICTORIA — A British Columbia Supreme Court judge has denied a forest company's application to extend an injunction against blockades by people opposed to the logging of old-growth trees in the Fairy Creek area of southern Vancouver Island.

Justice Douglas Thompson says in a written decision the factors in favour of extending the injunction do not outweigh the public interest in protecting the court's reputation.

There have been more than 1,000 arrests at Fairy Creek since the original injunction went into effect in April.

Forest company Teal Cedar Products Ltd. applied for a one-year extension of the injunction during court hearings in Nanaimo earlier this month, arguing protests were impeding the company's legal rights to harvest timber.

During the Nanaimo hearings, the court heard from lawyers representing the protesters who argued that people from all walks of life with environmental concerns are being treated like terrorists by police and the company.

Thompson says in his ruling the methods of enforcement of the court’s order at the protest site have led to serious and substantial infringement of civil liberties.

"The factors weighing in favour of the injunction do not outweigh the public interest in protecting the court from the risk of further depreciation of its reputation."

A lawyer for the Mounties said police are being tasked with enforcing a court injunction under increasingly difficult circumstances.

Thompson's ruling says the RCMP acted with "reasonable force" during much of the injunction period, but some video evidence presented during the hearings does show "disquieting lapses in reasonable crowd control."

A B.C. Supreme Court judge has denied a forest company's application to extend an injunction against the #FairyCreek blockades set up by people opposed to the logging of old-growth trees on southern Vancouver Island. #OldGrowth

The judge's ruling points to video evidence showing officers "repeatedly pulling COVID masks off protesters' faces while pepper spray was about to be deployed."

This report by The Canadian Press was first published Sept. 28, 2021.

i am not surprised the court

i am not surprised the court is worried about its reputation, as say worried about excessive force on peaceful citizens, the destruction of biomees, the deliberate aggressive overreach of hired enforcement, the failure by law and order to abide by court ruling to let press close to see what they ar eup to in truth.
who appointed these judges and who do they serve?